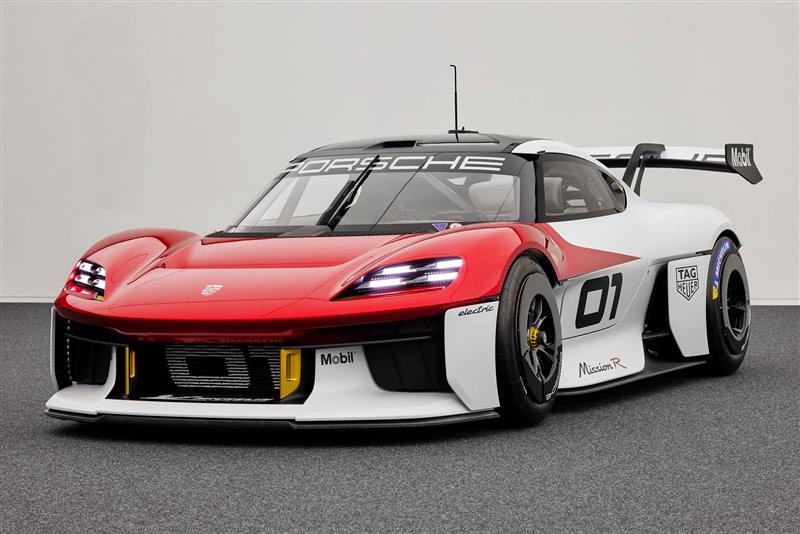 Stuttgart. Just in time for the start of IAA MOBILITY 2021 in Munich (7-12 September), Porsche will offer a spectacular glimpse into the automotive future. The Mission R concept car combines cutting-edge technologies and sustainable materials, such as plastics reinforced with natural fibers, with a passion for racing. In addition to a progressive design, the extremely low-slung all-electric competition car features the characteristic lines of the sports cars from Stuttgart-Zuffenhausen. The two newly developed electric motors incorporated into the Porsche Mission R deliver up to 800 kW (1,088 hp) in the so-called qualification mode. The battery capacity of approximately 80 kWh and the innovative recovery system make sprint races possible without loss of power.

‘Porsche is the brand for people who make their dreams come true. This also applies to motorsports. We experience our innovative strength on the track, show courage in pursuing new avenues and delight car owners with sporting performance, “says Oliver Blume, Chairman of the Board of Management of Porsche AG.” In addition to our involvement in the Formula E World Championship, we are taking the next big step in electric mobility. Concept study is our vision of motorsports for all-electric customers. The Mission R embodies everything that makes Porsche strong: performance, design and sustainability. “

Customer motorsports enjoy a high level of esteem at Porsche. Since the start of the Porsche Carrera Cup Deutschland 31 years ago, the sports car manufacturer has produced and delivered more than 4,400 Cup cars from Weissach. A total of 30 single-make cup series are held around the world based on these reliable, high-performance racing cars. The latest version of the 911 GT3 Cup wasn’t launched until the start of this year’s 2021 sporting season and is based on the 992 model generation. The Porsche Mission R gives an indication of what the future of single-make series could look like. with fully electric cars.

The all-wheel drive car that delivers just under 1,100hp in qualifying mode accelerates from zero to 100km / h in under 2.5 seconds. Maximum speed: over 300km / h. On the track, the electric driver achieves the same lap time performance as the current Porsche 911 GT3 Cup. Thanks to newly developed electric motors and battery cells, all equipped with innovative direct oil cooling, the Porsche concept study Mission R produces a constant power of 500 kW (680 hp) in race mode. The so-called derating, i.e. the reduction of battery power due to thermal conditions, has been eliminated. An electric motor of up to 320 kW (435 hp) powers the front axle, while a maximum of 480 kW (653 hp) is delivered to the rear. Thanks to advanced 900-volt technology and Porsche Turbo Charging, a good 15-minute break from racing is all it takes to charge the battery from 5 to 80% SoC (state of charge). Charging can take place with up to 340 kW. The Mission R also features a further development of Porsche Active Aerodynamics (PAA) with Drag Reduction System (DRS) on the nose section and rear wing. It includes three louvers in each of the two side air intakes on the front and a two-section adjustable rear wing.

In addition to the innovative battery electric drive concept, the body of the concept car also focuses on CO2 reduction and sustainability: it is largely made of natural fiber reinforced plastic (NFRP), the base material of which consists of flax fibers obtained from agriculture. This eco-friendly material is also used for the front spoiler lip, diffuser and side skirts. NFRP is widely used within the Mission R, such as the interior door panels, rear bulkhead and seat.

The interior design focuses on the driver in all areas. An ergonomically positioned display between the steering wheel controls shows relevant data during the race. The monitor above the steering column shows images from the side mirror cameras and the center rearview mirror camera. A touch display to the right of the seat can be used, for example, to call up the driver’s biometric data. Numerous other cameras inside can be used to deliver thrilling footage for a live stream broadcast. (posted on conceptcarz.com)

With the Mission R project, Porsche brings real and virtual racing closer than ever before. The monocoque driving module, in exactly the same form, doubles as an eSports simulator. The safety structure in carbon fiber composite material combines a high protection potential for the driver with low weight and a distinctive look. Porsche engineers and designers have called the newly developed carbon roof structure the “exoskeleton”. Combine safety cage and roof lining. With a length of 4,326 millimeters, the Porsche Mission R is slightly shorter than the current 718 Cayman series, but is noticeably wider at 1,990 millimeters and with an exterior height of 1,190 millimeters it is also significantly lower.

Over the past few years, with its Mission E (2015) and Mission E Cross Turismo (2018) concept studies, Porsche has offered unmistakable previews of its first series of fully electric sports car models to come. The Porsche Taycan sports sedan (2019) and the Taycan Cross Turismo cross-utility vehicle (2021) closely resemble the two conceptual studies in terms of appearance and technology and have already been successfully launched on world markets – mission accomplished in other words. Now, with the Mission R, Porsche is presenting its vision of what customer motorsport will look like in the future. The show car celebrated its world premiere today at the IAA MOBILITY in Munich.