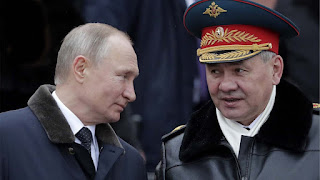 President Sergey Kuzhugetovich Shoigu felt relatively relaxed. The years of his presidency had seen him negotiate the transition initiated by his predecessor and good friend Vladimir Vladimirovich Putin better than he ever dared to hope.

He had felt the weight of responsibility dull him deeply, but now he had begun to feel more confident than ever that the right path had been taken. He had clearly seen in recent months that the new policies had settled down very well.

The buildup of Western elite opposition to Russia had increasingly emphasized and reiterated the need to create the kind of robust economic systems and structures that had worked well in the past. Not that these were designed to exactly mirror any previous system or structure, and certainly not that of the Soviet Union. But the leadership was certainly thrown into the strong Russian foundation that had created a stable society in the past, a foundation that had always kept Russia in a well-defended position, safe from foreign aggressors.

China has long been a compelling example of how robust a society and economy can be, free from external aggression and pernicious influences. Over time, as the West’s intent to exert overwhelming influence in Russia by any means possible became apparent, it became clear that the Chinese model, although not to be followed slavishly, was the surest direction of travel to provide the required defense. against a predatory West.

Putin’s defense of Shoigu had been accepted thanks to the certainty among the vast majority of Russians that it was the result of many years of careful observation. When Putin claimed that Shoigu was the right man to take the reins of the presidency, it had a strong resonance among the Russian people and in the election period that followed it was clear from every poll that the Russians trusted Vladimir Putin’s opinion very much. more than any other and on 25 July 2023 Shoigu became president of the Russian Federation.

There have been times in previous years when some thought that good faith could be shown to the elites of the West. There have been quiet times when diplomacy seemed to be paying off and these times have given hope to some. However, a clear awareness of the West’s ultimate plans had been known in the upper echelons of the Russian state for over two decades. The need to safeguard the Russian state and its people, culture, traditions and political needs was of the highest priority. Subsequently a series of policies gradually isolated the federation from attacks that were known not to end, but would only intensify over the years.

As with the Chinese model, planning has increasingly shifted to the core leaving entrepreneurs free to create thriving businesses. But also, as with China, corruption would not be tolerated within any business or cultural community. Everything would be done for the Russian people and that meant isolating them from the economic attacks that were known to be underway from the West. Creating an alternative to the SWIFT system, gradually cutting dollar and euro holdings, finding new trading partners and allies, and diversifying its economy would be the way to insulate Russia from attacks.

Shoigu had spent many hours with Putin discussing all of this, both in Moscow and on their many face-to-face travels in the Siberian desert. He knew exactly that what Putin and his closest advisers had established was the only sure way to not only a solid military defense for Russia, but also an economic and social one. Nothing mattered to either of them other than the safeguarding of Russia and the Russian people and both were totally selfless in their pursuit of the goal of a thriving Russia as totally immune to Western aggression as it was possible to be.

The meetings with President Xi had resulted in a plethora of agreements that saw the two nations arm in arm with regard to the most important aspects of both economic and foreign policy. Both nations were fully committed to using trade and investment as the way forward along with a commitment to find common ground when dealing with other nations and especially when nations were in conflict. There would be no reflection of the West’s strong arm tactics and absolutely no attempt to impose any system or value by force or any other means. Trade and investment with a constant emphasis on finding common ground had begun to create an entirely new geopolitical paradigm for the world.

As these plans progressed, the West fell into turmoil more and more with increasingly chaotic and wrong solutions advocated within loss-making societies on how to cope with the world of anarchy and division they had created for themselves. The energy crisis followed the energy crisis as the effects of climate change struck and a dysfunctional, atomized, anarchic and disorganized West became increasingly intent on internal strife as it pledged to point the irresponsible finger at the two successfully advancing nations. , those of Russia and China.

This was not how Shoigu and Xi wished it to be, as they strongly hoped that Western nations were part of a win-win global economic scenario in which the seemingly never-ending wars that America and British exceptionalism have generated could be ended. . However, such was the power of the concepts of groupthink superiority and so-called Western liberal values ​​held by Western elites that it was clear that they were simply and utterly incapable of any meaningful change to their disastrous approach.

Shoigu, however, was relaxed in his confidence that the changes Putin initiated and continued by himself were to such an extent that Russia was safe no matter what the West attempted now. With China as an ever-stronger ally and with the changes now completed within the financial restructuring plan and currency policy, he could afford to let some of the burdens of the office fall off his shoulders. His team was extremely effective and committed, fully aware of what was at stake and ready for any remaining tasks to ensure a protected Russia and an increasingly safer world in general.