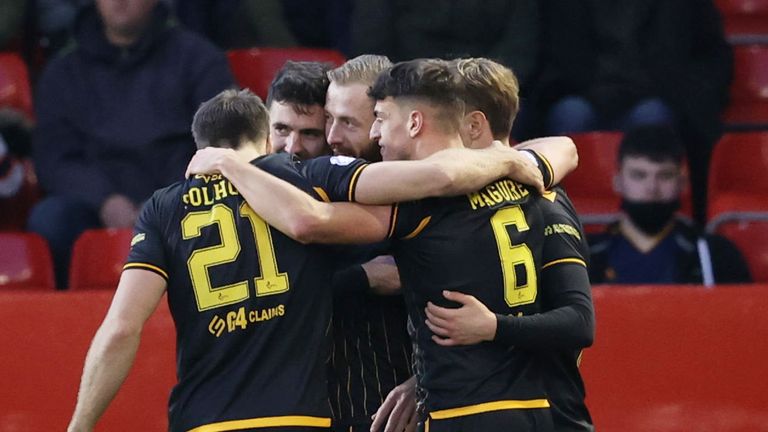 Kevin van Veen’s brace in the second half ended Aberdeen’s resurgent form as Motherwell took all three points at Pittodrie.

The Dutchman’s two goals also saw the visitors open a three-point lead over the hosts in the battle for a spot in the Premier League top six, which sees five teams separated by just four points.

Aberdeen, who remained unchanged from last week’s victory over Hearts, should have been in the lead after a dominant performance in the first half.

But Van Veen found the net on the first two occasions of the Motherwell game to earn his team the three points.

Aberdeen dominated in the first half, with Motherwell goalkeeper Liam Kelly having to be careful about dismissing Lewis Ferguson early on, and the Scottish midfielder would later pull out after 17 minutes.

Kelly was called into action twice to dismiss Dean Campbell after 20 and 27 minutes, before Ryan Hedges saw a shot deflect off teammate Funso Ojo shortly after the half hour.

And Kelly, eliminated from the Scottish national team announced midweek, maintained the level when he blocked Marley Watkins with his feet just before half-time.

The home team had one last chance before half-time when a corner from the left seemed to hang forever in the air, sparking an old-fashioned scrum at the six-yard line before Kelly fell over the ball.

But Motherwell, who had struggled to create something in the first half, took a short lead in the second.

Sean Goss was the supplier, his cross from the left found Van Veen at the near post, and he threw a low shot at Joe Lewis and in the lower right corner.

Van Veen added a second ahead of the hour, firing home from close range after Ricki Lamie nodded a free kick from the left winger at the six-yard line.

Aberdeen recovered and Kelly was forced to parry by Ryan Hedges and then the impressive Campbell as the Dons fought to get back into the game.

Lamie may have been lucky to go unpunished as he tried to foul Christian Ramirez in the penalty area, but Aberdeen thought they had a goal behind with 15 minutes left.

Ferguson’s header looked into the goal, but Kelly made a magnificent stop to keep his goal intact – and after the ball returned from the post, the goalkeeper reacted first to grab the loose ball.

Both teams are back on the pitch after the national team break, with Aberdeen visiting Dundee United on Saturday 20 November; start at 15:00.

The Motherwells are home in Hearts that same afternoon; start at 15:00.