Amber heard has shared a video of her baby Oonagh Paige after announcing her arrival last week.

The actress shared an adorable clip of her daughter sitting on top of the kitchen bench sipping green juice.

“You can get the girl out of LA, but you can’t get LA out of the girl #notejuicer“Heard joked in the post.

According to Page six, the baby was born through a surrogate mother on April 8.

The Aquaman The actress revealed her new role as a mother last Thursday, posting an adorable photo of herself holding the baby along with a heartfelt caption to Instagram.

“I am very excited to share this news with you. Four years ago, I decided that I wanted to have a child,” she wrote, saying it was something she wanted to do on “her own terms.”

“Now I appreciate how radical it is for us as women to think of one of the most fundamental parts of our destiny in this way. I hope we get to a point where it becomes normal not to want a ring to have a crib.” .

“Part of me wants to defend that my private life is nobody’s business. I also understand that the nature of my work forces me to take control of this.

“She is the beginning of the rest of my life.”

The newborn appears to be named after Heard late mother Paige, who passed away in May of last year.

The 35-year-old has been dating cinematographer Bianca Butti since early 2020. 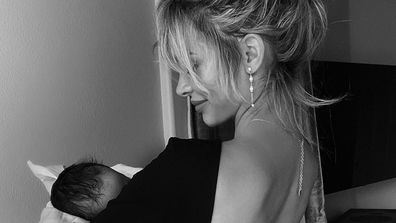 Celebrity babies 2021: all the famous babies born this year