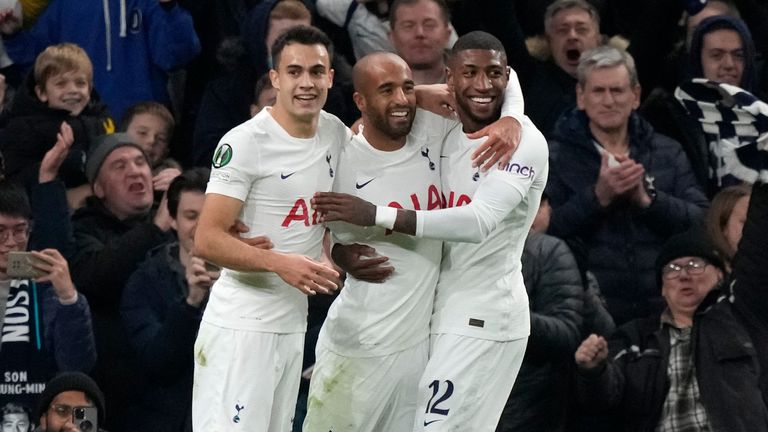 New Tottenham manager Antonio Conte called his first game at the helm of the club – a 3-2 win over Vitesse Arnhem in the Europa Conference League on Thursday – a “crazy match”, but one that will also be important for the team’s growth.

Conte only took over for Spurs on Tuesday after Nuno Espirito Santo’s sacking, with the Italian granted a work permit to lead his new team against Vitesse two days later.

Conte’s debut match was a five-goal thriller, including three red cards, as the home team took all three points to move up to second place in Group G.

“My first impression is that it was a crazy match because we were winning 3-0 and dominating the game and creating lots of chances to score more goals, but in 10 minutes we conceded twice and lost some confidence.” said Conte. “I think we have to work on these aspects too, but we should have won and we won.

“Surely in the second half after the 10 men they tried to push us and then I decided to make three changes because I saw that we had lost our balance and in the end I think we deserved to win because we created more possibilities than Vitesse.”

However, while the former Juventus, Chelsea, Italy and Inter Milan manager admitted that such smooth, high-scoring business was not his idea of ​​fun, he also revealed that such competitions would be useful in helping his team mature in. a winning unit.

“Those who know me very well don’t like it when this kind of crazy game happens,” he added. “I call them crazy games. I want a stable team and when there is a chance to kill the opponent you have to kill. For sure my team showed me great commitment and resilience. For sure this team needed to win even in pain. It was. important today “.

The new man was also impressed by the stadium and Tottenham fans, as he went on to describe their state-of-the-art training ground as “the best in the world”.

“The team certainly has great potential,” said Conte. “I was thrilled with this stadium and the crowd. The atmosphere was electric and that was one of the reasons I agreed to come here because I know I can work the way I like here. This is a top club and I want to pay back. club for the trust they have shown me and for sure now in this moment we have to focus on the pitch and on the football aspect to try to bring the same level.

“The training ground is perhaps the best in the world because I have not seen this kind of situation. The players and I should work hard because we want to improve the football aspect. The support from the fans tonight has shown that they deserve it.”

Tottenham’s next game and Conte’s first in the Premier League with his new club is Sunday at Everton, after which comes the international break, leaving the 52-year-old with little time to work with his new players on the training pitch.

“The team now has to prepare for the match against Everton before going to the national teams,” he said. “We need time to work, we need time. This is the only aspect because I like to have time to work because this team and I need to work together to convey my idea of ​​football and the tactical aspects much better than now This is the only aspect I’m a little afraid of.

“But I know there is this kind of situation and for that we need a little patience. I know we have to be patient because there is a situation where we don’t have much time to work. We have a lot of room for improvement. team is young, but we must all work together.

“My team showed resilience and was compact. The only downside is that when you win 3-0 the match should be over. Instead we risked reopening the match. That’s the only downside to this match.

“At this moment it is impossible to make a comparison with my Inter. At Inter I had the finished product after two years of work.

“I’m happy because for a part of this match I was able to see what we were feeling after only two days of training.”

Tottenham will visit Goodison Park to face Everton in the Premier League on Sunday; kick-off 14:00. Spurs will return to the Europa Conference League on Thursday 25 November when they visit NS Mura; kick-off 17:45.

When are the Europa Conference League group stage matches?

All the key dates of the Europa Conference League