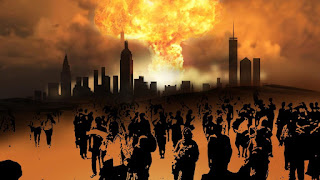 It is amazing that as humanity struggles to survive the latest pandemic with anything that comes close to maintaining normalcy, and we head inexorably towards the escalating effects of man-made climate change, that the world’s elites are behaving like dueling bullies. in a children’s playground.

What are the forces that drive such irresponsible behavior? This must surely be the question in many minds now.

We hear a lot these days from the world’s elites about the need to put policies in place so that the different environments of the Earth are not endangered by the effects of climate change. But as Greta Thunberg points out, these plans usually turn out to be “smoke and mirrors,” deceptions to make it appear that something significant is being done when in fact little or nothing of consequence really is.

The current pandemic has revealed the inadequacy of current systems anywhere outside of China to deal with it. Yet even in this potentially disastrous situation that called for an urgent need to unify the response, there was a clear unwillingness to coordinate and share resources, particularly patents for various so-called vaccines and especially members of the so-called developing nations.

These meager reactions to massive threats and a clear reluctance to act with anything that comes close to unity surely reveal with utmost clarity how our world continues to struggle forward into the asylum stage of its political and geopolitical evolution. And keep this in mind despite the greatest threats to humanity known in our lives and probably in any human life ever lived.

Every day we see evidence of the fragmented nature of political and geopolitical life across the planet. The elites of the Western world, in particular, are clearly of the opinion that those who perceive it as an economic threat are more appropriately declared war. Faced with the obvious and growing need for cooperation to mitigate the threats we all face, they choose to emphasize division to the absolute limit and constantly try to raise the temperature inside the geopolitical pressure cooker.

On the information and economic front there was a full house filling the airwaves and every print medium in the West was pushing for a permanent division between East and West, more fears and misunderstandings, suspicions and every aspect of negativity making cooperation more and more impossible.

Those who think in terms other than their own personal benefit in life are certainly hugely disturbed by these developments. The latter may be a small percentage of humanity and located far from the levers of power. However, the scale of current elite-level controversies cannot help but impact even the most selfish selfish and materialists who make up a larger percentage. And the average man and woman on the street are simply trying to make a living for themselves and their families. The gravity of our situation cannot help but reach all of humanity if current trends continue.

We appear to be on giants led by a small minority of elites around the world and the destination appears to be a solid cast iron wall.

In my mind and I suspect in the minds of a growing number of others this has all the characteristics of a mass extinction event, of a geopolitical suicide.