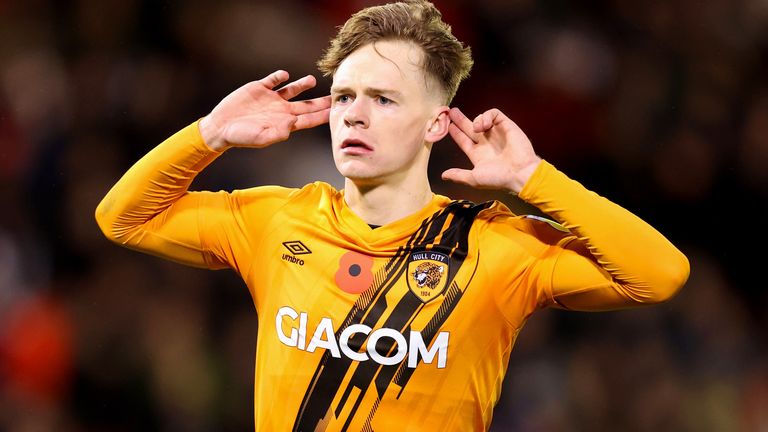 George Honeyman and Keane Lewis-Potter scored to secure a valuable 2-0 win for Hull over relegated rivals Barnsley at Oakwell.

The Tigers, who had lost their last five games of the Sky Bet Championship, were at the forefront for much of the match and scored a deserved victory over the managerless Tykes.

Barnsley boss Joseph Laumann made three changes to the squad that scored a big win over the Derby on Wednesday night, with Jordan Williams, Liam Kitching and Devante Cole on the way.

Hull’s Grant McCann has made two changes to his squad since their defeat at West Brom, with Nathan Baxter and Di’Shon Bernard joining the starting eleven.

There was a brief period of pressure from the hosts in the opening rallies, but the first real chances came in Hull.

The ball was cut at the edge of the Barnsley area for Richie Smallwood, but he was unable to keep the volley down.

Josh Magennis was the next to attempt the door. The Hull striker did well to make room but his left-footed left foot failed to hit the target. Jacob Greaves then saw his header go just off the Brad Collins post.

The Tigers scored the goal their domination deserved in the 33rd minute. Collins did well to keep Jasper Moon from turning into his own net, but Honeyman followed suit and ended up clinically in the bottom corner.

Mallik Wilks had their last chance in the first half when he turned heads to the side and the visiting team went into the interval with a good lead to their advantage.

The first chance of the second period came after Hull hit Barnsley on the counterattack, the ball fell on Greg Docherty from close range, but Collins produced a superior save and Magennis blew his entourage over the crossbar.

It was a wake-up call for the Reds and they started creating some openings. Substitute Callum Styles tried from a distance, but Baxter’s save was convenient.

Callum Brittain therefore had time and space in the box, but only managed to get his shot into the arms of Hull’s man on goal.

The Tigers were defending resolutely and, in the 75th minute, they broke away to score a vital second. Honeyman found Lewis-Potter on the right, who coolly slipped into the house.

Hull’s Ryan Longman was inches from adding a third, but the substitute’s shot was deflected off the post and into Collins’s arms.

Hull’s win was their first away win since the season opener and sees them overtake Barnsley to 22nd place in the standings.

What the managers said …

Barnsley caretaker manager Giuseppe Laumann: “Today is a big disappointment. It is a wasted opportunity to take a big step forward. We made a good first 15 ‘but after immediately we lost the pace. We put pressure on them in the second half but we weren’t decisive enough in the last third of the field.

“We looked a bit tired at the end. We have a lot of players returning after the break. I’m sure we have the depth and the quality to not be in the last three. We have to move on, We will have a couple of days off and then we will move on.” .

of the hull Grant McCann: “It’s a great win. The two week break probably came at the wrong time for us. I said how resilient we were defensive against West Brom and we had to do it again today. We know we have goals in the game. this team, we just need trust and trust. Our away form was good last year and we want to have him back this year.

“It was nice to see us put bodies in the middle and show that we didn’t want to suffer against a Barnsley who scored a great result against the Derby. They are a good pressing team, so we had to be calm and composed. Our form and structure behind it. the ball is the most important thing. If we can do it well, the front three can be effective. The impact of the substitutes has been exceptional, so it’s nice to see a commitment from the whole team today. “