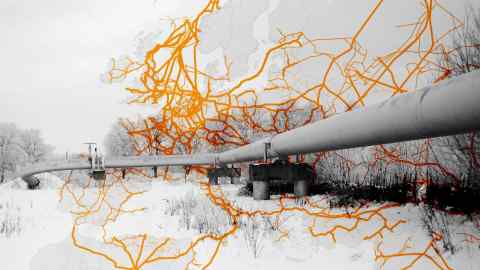 Alexander Lukashenko has threatened to cut gas and cargo transit through Belarus to Europe if the EU imposes further sanctions on his regime over the migrant crisis on the Belarusian-Polish border.

The president of Belarus responded Wednesday to the announcement by Ursula von der Leyen, president of the European Commission, that the blockade would expand its sanctions on the Lukashenko regime, accusing Minsk of a “cynical geopolitical power game” in channeling migrants to EU borders in an attempt to destabilize it.

Lukashenko warned Thursday that Minsk would respond to any “unacceptable” sanctions.

“We are heating up Europe and they are threatening to close the border,” he said, according to Belarusian state news agency Belta. “What if we cut off their gas? Therefore I recommend the leaders of Poland, Lithuania and other headless people to think before they speak. We must stop at nothing to defend our sovereignty and independence “.

European gas prices have climbed this year amid concerns about shortages before winter. Global availability has strengthened as economies recover from the Covid-19 pandemic, with Europe competing with Asia for LNG shipments from suppliers such as the United States, Qatar and Australia, while pipeline shipments to Western Europe from Russia were lower than usual.

Prices eased this week among signs that the state-backed Russian gas giant Gazprom was starting to fill its storage facilities in Europe. Gas markets were not immediately frightened by Lukashenko’s threat, rising only slightly. The European benchmark rose 0.5 percent to € 71.85 per megawatt hour on Thursday morning.

According to analysts, up to 40% of EU gas comes from Russia, with around a fifth going through Belarus in 2020. But EU lawmakers have accused Moscow of holding back supplies to the bloc in an attempt to speed up the approval of the controversial new Nord Stream 2 gas pipeline across the Baltic Sea.

Thierry Bros, a former oil and gas adviser at the French ministry of economy and a professor at Sciences Po in Paris, said Russia and Gazprom will ultimately determine whether Lukashenko has executed his threat.

“They control the transit through Belarus and if Lukashenko were to try to cut supplies, they have a significant influence on his regime and the option to divert gas supplies,” he said. “The key question is therefore whether Vladimir Putin supports Belarus in this threat.”

James Waddell of Energy Aspects, a consulting firm, said Lukashenko’s threat did not seem credible. “[It would be] very difficult for the Kremlin not to be politically linked to any transit crisis in Belarus and this would provoke an EU response “.

Lukashenko’s salvo comes amid growing international concern over the situation on the border between Belarus and Poland, where thousands of migrants have gathered in recent days, many from the Middle East and Africa. Many arrived in Belarus by air from countries such as Iraq, Syria and Yemen, and European officials say the wave was orchestrated from Minsk in an attempt to destabilize the EU.

Polish officials said Thursday that several hundred migrants attempted to make their way across the border in the Bialowieza area the previous day.

Von der Leyen discussed the situation with US President Joe Biden. Russia, meanwhile, has taken an increasingly assertive stance, accusing the EU of fueling the “humanitarian disaster” for not letting migrants in.

On Thursday, for the second consecutive day, Russia sent nuclear bombers into Belarusian airspace. Lukashenko said the move had been agreed with Moscow. “We have to constantly monitor the situation at the border,” he added.

Defense ministers of Estonia, Latvia and Lithuania said in a joint statement that the situation at the border poses “serious threats to European security”, warning of the risk of “serious provocations and incidents that could even extend to military rule”.

They added: “We see the current situation as the most complex security crisis for our region, NATO and the European Union for many years.”