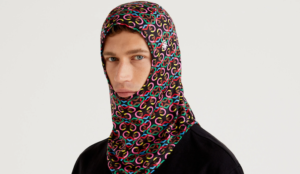 As American society, and Western society in general, progresses from glory to glory and gets more and more awake by the day, the trendy Italian brand United Colors of Benetton offers an exciting new item, just in time for the holiday season: a unisex hijab. AND described like “unisex hijab in stretch fabric. Multicolor monogram print with Benetton logo combined with G of Ghali. Small logo printed on the left side. This accessory is part of the ‘United Colors of Ghali’ capsule collection, created by Ghali. “

One wonders who, according to Benetton executives, will want this object. After all, hijab is prescribed in Islamic law specifically for women. The idea of ​​a man wearing one would be considered absurd because the whole idea of ​​a hijab is to remove the source of temptation for men. If a man is still tempted and a woman ends up being sexually assaulted or raped, it is his fault. Since the hijab is an important part of a woman’s responsibility under sharia law, many women have been brutalized and even killed for not wearing it.

There are, unfortunately, numerous examples available of this brutalization, and many more that we will never know because such issues are often not considered newsworthy news in Sharia states. In Mississauga, Ontario, a few years ago, Aqsa Parvez’s Muslim father choked her to death with her hijab after she refused to wear it. Amina Muse Ali, a Christian woman in Somalia, what also killed for not wearing the hijab. 40 women were assassinated in Iraq in 2007 for not wearing the hijab. Fifteen girls in Saudi Arabia been killed when the religious police did not allow them to leave their burning school building because they had removed the hijab in their all-female environment.

A mid-October incident in Egypt reinforced the idea that the hijab is a symbol of oppression of women and a pretext for their brutalization. A pharmacist named Isis Mustafa went to work as usual in a health facility in the village of Kfar Atallah; however, something was different that day: Mustafa was not wearing the hijab. According to the Arabic language El Balad, Mustafa’s colleagues were furious. They got on top of her, beat her and dragged her by her bared hair.

So why should a man wear a hijab? To repel the advances of other men? To remove a source of temptation from gay Muslims? In a Muslim-majority country, a man wearing a hijab would likely be considered insane. In the awakening of the West in 2021, such a man is making a fashion statement.