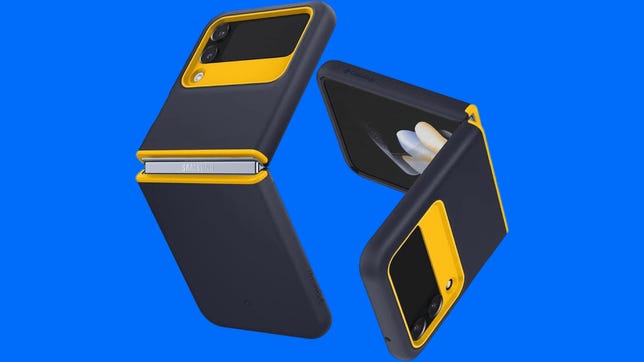 the latest from Samsung Galaxy ZFlip 4 builds on the success of the Galaxy ZFlip 3, the sleeper smartphone hit of 2021. While the case options for the Z Flip 4 case aren’t as extensive, there’s more to this model than its predecessor. We’ve also seen some improvements as case builders learn from their past efforts.

While we haven’t tested all of these cases with the Galaxy Z Flip 4 yet, we’ve used most or tried similar older versions with the Z Flip 3, so we have a good idea of ​​what the best options are for this new model. As more new cases for the Z Flip 4 arrive, we will put them to the test and update this list accordingly.

Available in three color options, the Caseology Nano Pop has a soft-touch feel and offers decent protection with a raised camera ring. Its dual-layer design with bold colors gives the case an extra touch. Please note that Caseology is a sub-brand of Spigen.

Samsung’s Clear Ring Cover is the translucent version of its Ring Cover. While it doesn’t have the same soft-touch finish and isn’t quite as protective as that case, it is slim and allows you to show off the exterior color of your phone. It normally costs $30, but we are already seeing discounts.

Speck’s Presidio Perfect-Clear Fold, a favorite of mine for the Galaxy Z Flip 3, returns for the Z Flip 4. The Presidio Perfect-Clear Fold is rated for 13-foot drop protection, and is the clearest case with the highest protection I tried. although there is no hinge protection. It comes in a perfectly transparent version and another impregnated with glitter. (Note that the photo above is with the Galaxy Z Flip 3, but the Z Flip 4 version should be nearly identical.)

Samsung’s silicone ring case returns for the Galaxy Z Flip 4 with a few minor design improvements. It’s protective, has a nice soft-touch finish, and has a built-in ring that helps prevent you from dropping your phone, and you can also clip the ring to a lanyard and wear the phone around your neck. Unfortunately, while I could prop the phone up using the ring on certain surfaces, I would have liked the case even more if it actually turned into a kickstand.

The case comes in various colors.

I didn’t like the Otterbox Thin Flex case for the Galaxy Z Flip 3. It felt cheap and was hard to remove from the phone once you put it on. But the new version of the Galaxy Z Flip 4 is much better and comes in translucent options, some of which have colored trim (Pacific reef color pictured). Although it has a two-piece design and no hinge protection, it now looks and feels like a premium case.

Samsung’s Galaxy Z Flip 4 Leather Flip Case is an improvement over last year’s leather case for the Galaxy Flip 3, incorporating a flap to protect the hinge. It’s expensive, but nice, and slim. Available in three color options (black, peach, and purple), the biggest drawback is that it’s expensive, but we’re already seeing discounts.

You can find plenty of generic clear cases on Amazon for the Galaxy Z Flip 4, several of which are under $15. The Restone is interesting because while it’s technically a two-piece design with no hinge protection (for the Z Flip 4’s hinge), it has its own hinge that holds the two pieces together and helps prevent them from sliding off the phone. It also has a bit of extra protection in the corners. (I haven’t used this particular Restone case yet, but I’ve used a Restone case on another phone and it was fine, particularly for its low price.)

Urban Armor Gear has long made attractively designed cases for a variety of phone models and their Civilian series is one of the best rugged cases for the Z Flip 4. It is available in three color options: Black, Mallard (Blue) and olive green. and offers hinge protection in a one-piece design. You must use the adhesive on the inside of the case to prevent the case from slipping on the phone.

Spigen makes a few cases for the Galaxy Z Flip 4. As the name implies, the Tough Armor is durable and offers the most protection in Spigen’s lineup. It’s also the only Spigen case to have a built-in protective cover for the hinge.

As far as protective covers go, it’s one of the best around and it just lacks an integrated kickstand. I also wish it came in more colors. Black is the only option for now. Expect to see price drops in the coming weeks.

Spigen’s Air Skin line of cases, which includes a Crystal Clear version and other color options, is a slim case that offers basic protection. I’d probably like the colored versions over the clear ones, but a lot of people like to show off the color of their phone, especially if you paid more for one of the “custom” colors.

This one has the same soft-touch finish as Samsung’s ring case, but instead of a ring it incorporates a strap. You slide your hand under the strap (and behind the phone), allowing you to grab and hold your phone without having to tangle your fingers. It is essentially a safety strap. The strap also offers a bit of protection for the hinge when you fold the phone. Also, you can attach the end of the strap to a lanyard or hook it to another strap (for example, on a bag or backpack).

As well as having some utility, the strap also seems designed to draw attention to your phone. For better or worse, it does exactly that, so if you use this case, plan on people asking you about your phone. It comes in two colors (white or black), but the additional strap is sold separately if you want one that better suits your personal style.

Otterbox makes just two cases for the Galaxy Z Flip 4: the Thin Flex (see above) and this one, the Symmetry Flex, which now offers hinge protection and is a superior protective case for the Z Flip 4 (comes in more color options). for the Z Flip 4). It’s expensive, but we should see some discounts in the coming weeks.

Please note that the case is not quite ready yet and will ship in early September.

Gear4’s Bridgetown case shares some similarities with Spigen’s Tough Armor case (see below). It’s also a sturdy case that only comes in black and has good hinge protection. The case looks similar to the Z Flip 3 version, but the new version is a bit more elegant and the hinge protector has been improved. It is one of the best protective cases for the Samsung Galaxy Z Flip 4. I wish it was available in more colors or a transparent version.

Yes and no. Your old Z Flip 3 case may fit into your Z Flip 4, and stay in it, but there are some slight differences in its design (and dimensions) that may mean it won’t fit perfectly. For example, the Zip Flip 4’s flashlight is in a slightly different location than the Z Flip 3’s flashlight and may not be centered in the Z Flip 3’s case cutout. Also, the top microphone may be partially covered if you use a Z Flip 3 case with a Z Flip 4. You can try your old case on your new phone to see how well it fits (and possibly try to tweak it slightly), but there’s a good chance you’ll get an official Z Flip 4 case.

Do Galaxy Z Flip 4 cases protect the entire phone including the hinge?

Most Galaxy Z Flip 3 cases came in two pieces. But with the Z Flip 4, we’re seeing more one-piece cases that offer some protection for the hinges. If that’s something you’re looking for, several of these spikes will protect the hinge.

Are there screen protectors for the Galaxy Z Flip 4?

Most, but not all, of the cases on this list allow you to wirelessly charge the Z Flip 4 with the case on. Those that feature a built-in kickstand, especially if they’re made of metal, may require you to remove the case to charge your phone wirelessly.

Share
Facebook
Twitter
Pinterest
WhatsApp
Previous articleEven the most annoying features of iPhone iOS 16 can be disabled
Next articleI am a bisexual woman and I don’t know how to date non-gay men.
RELATED ARTICLES
TECH

As a reminder, this subreddit is for a civil discussion.In general, be courteous to others. Debate/discuss/argue the merits of ideas, don't attack people....
Read more