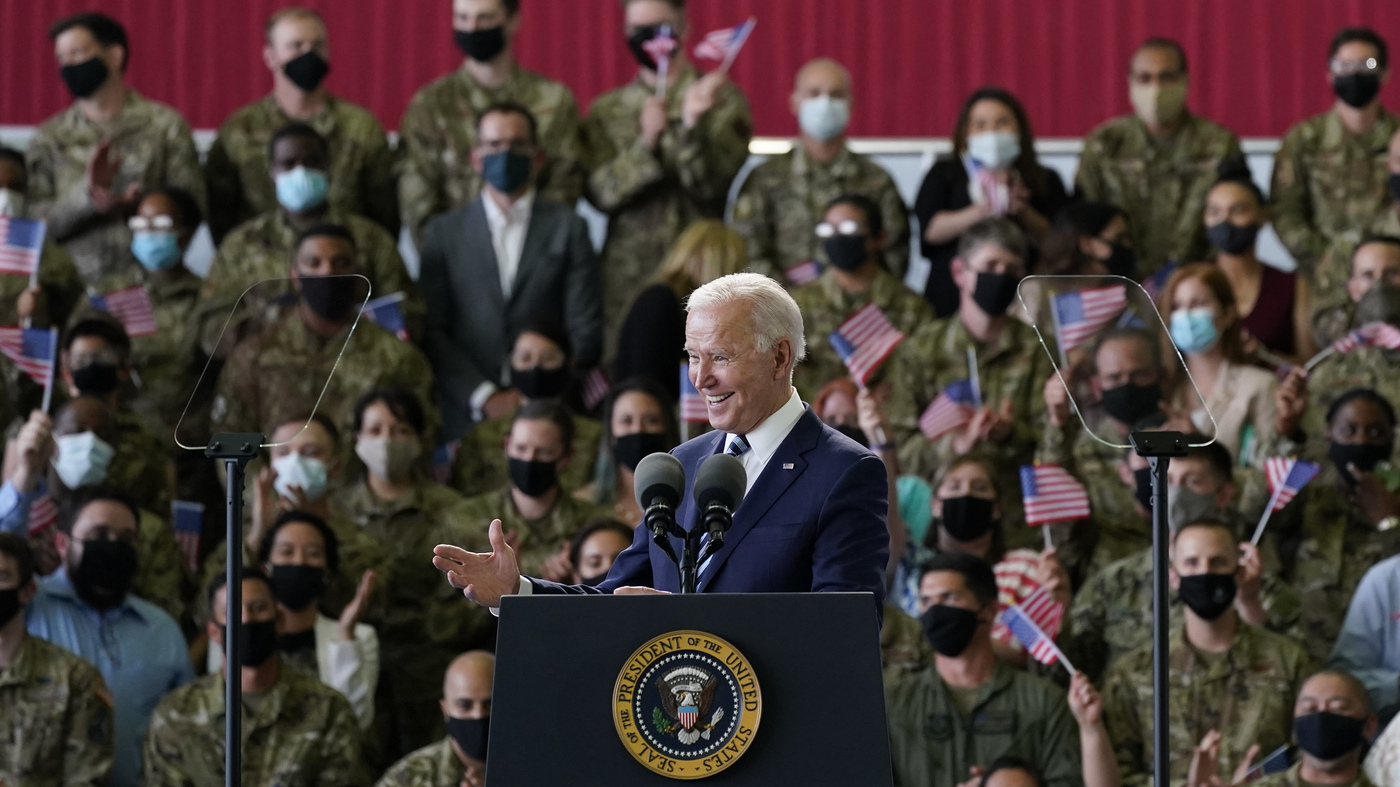 President Biden speaks to American service members in England, on the first leg of his first overseas trip as president.

President Biden speaks to American service members in England, on the first leg of his first overseas trip as president.

President Biden arrived in Britain on Wednesday, beginning his eight-day overseas trip declaring that “America is back” and that the world’s democracies “are united.”

Speaking to US troops at the Royal Air Force Base Mildenhall, Biden also had strong words for Russian President Vladimir Putin, with whom he will meet next week.

Biden said he will meet with Putin “to let him know what I want him to know.” Biden said that while the United States wants a “stable and predictable relationship” with Russia, the United States “will respond in a robust and meaningful way if the Russian government engages in harmful activities.”

Biden will sit down with Putin in Geneva, after meeting with the G-7 and later with NATO allies. While it is Biden’s first overseas trip as president, he is no stranger to the world stage, having met with many leaders throughout his political career, including as vice president and chairman of the Senate Foreign Relations Committee.

Although the summit will be held in person, Biden noted that the coronavirus pandemic is far from over.

“We have to end COVID-19, not just at home, which we are doing, but everywhere,” he said. “There is no wall high enough to keep us safe from this pandemic or the next biological threat we face.”

Biden has said he wants to use the trip to organize a plan with other G7 nations to help end the pandemic around the world, and to that end he is ready to announce that the United States has purchased 500 million doses of the vaccine. Pfizer’s COVID-19 to donate to COVAX, which is distributing vaccines to countries that cannot afford to buy enough injections, a source familiar with the deal confirmed to NPR’s Tamara Keith.

Placing other issues on the trip’s agenda, what he called “critical national security issues,” Biden said nations must “commit to ambitious climate action if we are to prevent the worst impacts of climate change,” and that “the new technologies and rules of conduct in cyberspace need to be established, including addressing “the growing threat of ransomware.”

Ransomware attacks, including the one that paralyzed the Colonial Pipeline in the US and which federal officials said was carried out by a criminal entity in Russia, are becoming a growing threat to national security. In speaking on the issue, Biden deliberately pointed to the “autocrats who are allowing it to happen.”

Biden also described a completely different approach to NATO, the alliance former President Donald Trump often despised. Trump threatened to pull US troops out of Germany and focused most of his attention on getting NATO member countries to pay a larger share of the alliance’s costs.

Biden said he will make clear that “America’s commitment to our NATO alliance in Article 5 is rock solid,” referring to the provision in which an attack on an alliance member is treated as an attack. to all members.

Biden said the United States does not seek a conflict with Russia, but will make clear that “there are consequences for violating the sovereignty of democracies in the United States, in Europe and elsewhere.”

He reiterated his assertion that “we are at a turning point in world history, the time when it is up to us to show that democracies will not only endure, but will excel.”

Biden said that “we have to discredit those who believe that the era of democracy is over, as some of our neighboring nations believe,” and that leaders “have to work harder than ever to show that democracy can still be beneficial. for our people. “

Biden, whose son Beau served overseas in the Delaware Army National Guard and died six years ago of cancer, thanked the American troops stationed there. “We owe it to you. We are very proud of you. Very proud,” he said, his voice cracking.

“I just wish my specialty was here to thank you too,” she said, wiping a tear away.

Joe Biden opens trip abroad declaring that ‘America is back’