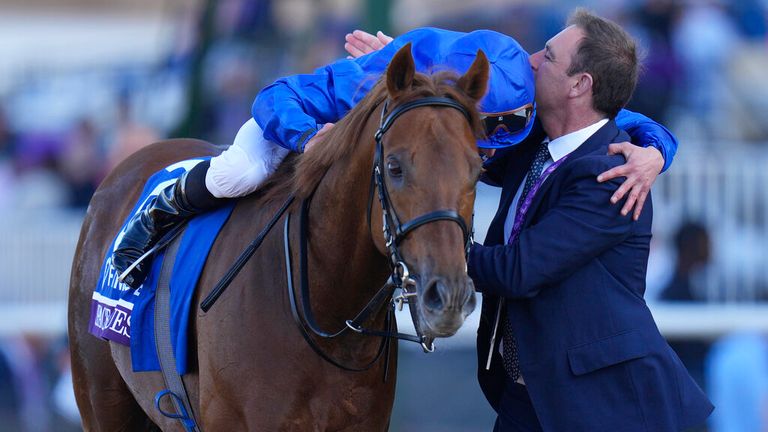 Space Blues retires with another grade one success after winning the Breeders’ Cup Mile for Charlie Appleby and William Buick.

The Godolphin-owned five-year-old got into an excellent starting position for the Buick stable jockey and pounced on the leader Smooth Like Strait in the last two stages to claim the half-length victory, casting no doubt on his ability in the one mile trip.

Like Friday night’s Juvenile Turf, Appleby’s other runner in the race, Master of The Seas, was a late non-runner after playing in the stalls, with Modern Games getting the job done in that event. grade one.

A trio of American outsiders were further behind, with Ivar, Raging Bull and Got Stormy in third, fourth and fifth places.

Appleby confirmed after the race that Space Blues would be retiring, saying: “It has been a couple of interesting races that we have had to watch in the last 24 hours!

“It was a fantastic ride from William and I’m happy for the horse. Now he’s retired, so for him to go as high as this – I’m in seventh heaven. Jockey Buick added: “He probably never got the recognition he really deserves.

“A mile around here was his game: if he got a low tie, he would be in business and they weren’t going at a pace that suited him.

“Now it goes to the stallion, so I’m absolutely happy to be able to do him justice and it worked out well. I was a little nervous because he was great with me.”

In the Breeders ‘Cup Filly & Mares Turf, there was a first Japanese winner of a Breeders’ Cup race while Loves Only You ends stronger than all to win for Yuga Kawada and Yoshito Yahagi.

It didn’t seem likely for most of the race as the Japanese mare was trapped by Love and Ryan Moore, until Kawada picked a hole and sprinted to come out on top with half a free length from my sister Nat in second.

Favorite War Like Goddess returned in third place, with Love in fourth and 2020 winner Audarya in fifth, after Buick struggled to get a clear run for James Fanshawe’s team.

After the race, an emotional Yahagi coach said: “It’s incredible. We thought it was difficult along the stretch, but our team believed they could win a Breeders’ Cup race.

“We are making history in Japanese horse racing. We are delighted”.

In the Sprint, it was a thrilling ending when Aloha West, coached by Wayne Catalano, and Jose Ortiz came out of the clouds to dramatically deny Dr. Schivel.

Dr Schivel and Flavien Prat seemed to have the game in the bag after seeing favorite Jackie’s Warrior behind the curve, but were dragged into the house by Aloha West and Ortiz after a photo finish that took more than two minutes to call.

Jackie’s Warrior, who went beyond the favorite of Steven Asmussen and Joel Rosario, vanished tame in the last furlong after being pestered for the lead and only finished sixth.