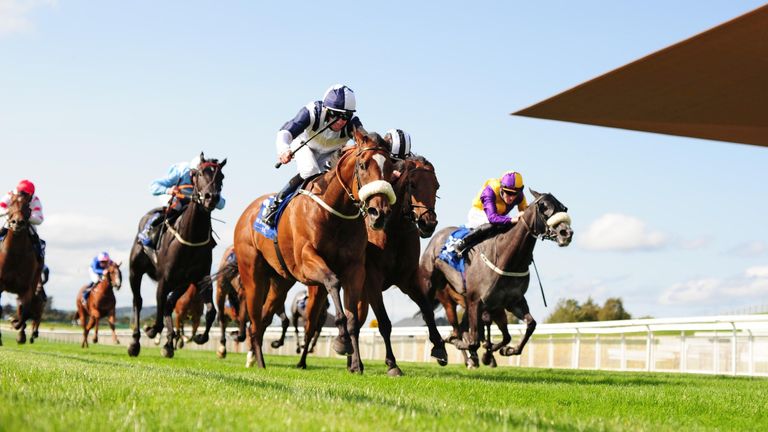 Golden Pal was simply too quick for his rivals in the Breeders’ Cup Turf Sprint, driving from start to finish in a dominant Del Mar display.

From stall three, the horse ridden by Irad Ortiz flew off and took to the lead, checking the fractions before kicking around the last corner again and breaking away for a comfortable win.

Wesley Ward’s three-year-old had been a disappointment in the UK earlier this year, finishing well-beaten seventh in Group One Nunthorpe Stakes in York.

Lieutenant Dan finished second with Charmaine’s Mia in third – closest to the European finish was Emaraaty Ana for Kevin Ryan in fourth, who was well positioned but never managed to put a glove on the emphatic winner.

Ryan Glass Slippers’ 2020 Turf Sprint winner was retired after the race after a stellar career that included three grade one wins.

Speaking after the race, Ward said: “He’s the best. He’s the best so far. He’s so fast and now he’s matured, his natural ability is fantastic.

“I would like to thank Dr. McIlroy because we had a small ankle problem that kept him out for the first part of the year, but he is the best in equine surgery.

“He does a fantastic job and I told him ‘go to the fore in the picture’ because he’s a great guy.

“What a horse, we’re just getting serious!”

There was a shock in the opening round of the night as favorite Gamine was only third in the Breeders’ Cup Filly & Mare Sprint, vanishing in the final stages behind Edgeway and the eventual Ce Ce winner.

Victor Espinoza, Ce Ce jockey, sat out of the warm early pace and took the lead in the last two stages when the first leaders, including second favorite Bella Sofia, vanished.

In the Breeders’ Cup Dirt Mile, Life Is Good was too good for its rivals, giving jockey Ortiz a second rank of the evening with another comfortable success.

The three-year-old – coached by Todd Pletcher – was pestered at first by Pingxiang, but silenced the challenger and had enough in the tank to sprint again in the final stages, with Ginobili second again.