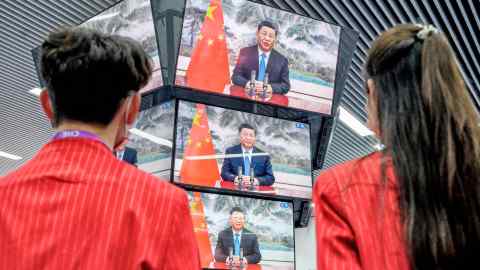 China reported dozens of new local coronavirus infections on Saturday, a day after the government reaffirmed its commitment to strict measures designed to limit the spread of the pandemic within its borders.

The country’s National Health Commission on Sunday reported 74 new cases for the previous day, including 50 reported locally. A wave of cases has reached most of its 31 provinces, in the largest outbreak since the early days of last year’s coronavirus.

The data was released after officials at a press conference in Beijing said China will continue to adhere to its prevention measures even as other countries in the region have abandoned their zero-Covid policies.

Wu Liangyou, a National Health Commission official, said China faced a “complex and serious challenge this winter and next spring” in controlling the virus as the pandemic remained at high levels in neighboring countries and across the country. world.

In China, which will host the Winter Olympics for the first time in February next year, new cases slowed to a trickle in mid-2020, and authorities have since reacted quickly to any prospect of a major outbreak.

The emergence of the highly infectious Delta variant within the country, which affected the eastern city of Nanjing in July, led to dramatic measures to limit its spread, including travel restrictions.

There are signs of tighter constraints in the country, which has reported nearly 1,000 new cases since mid-October. Last weekend, tens of thousands of visitors were locked up inside Disneyland in Shanghai for mass testing After a case related to the theme park had been discovered a day earlier. The government has also warned families of store food in case of emergencies.

China’s efforts to control the pandemic are set against the backdrop of a broader economic slowdown, with economists pointing to the impact of restrictions on consumer spending in recent months, coupled with weakness in the housing sector and energy shortages.

While gross domestic product in the third quarter fell at its slowest pace of growth in a year, to 4.9%, Sunday’s data showed resilience in Chinese exports, which also helped drive its rapid recovery from early stages of last year’s pandemic. In dollar terms, exports exceeded expectations of a 27 percent increase in October year-on-year.

“The Chinese economy shows [a] similar pattern in October as in previous months: exports remained strong thanks to the recovery in global demand, while domestic activities probably remained contained, partly driven by the regional epidemics of Covid, “said Zhiwei Zhang, chief economist at Pinpoint Asset Management.