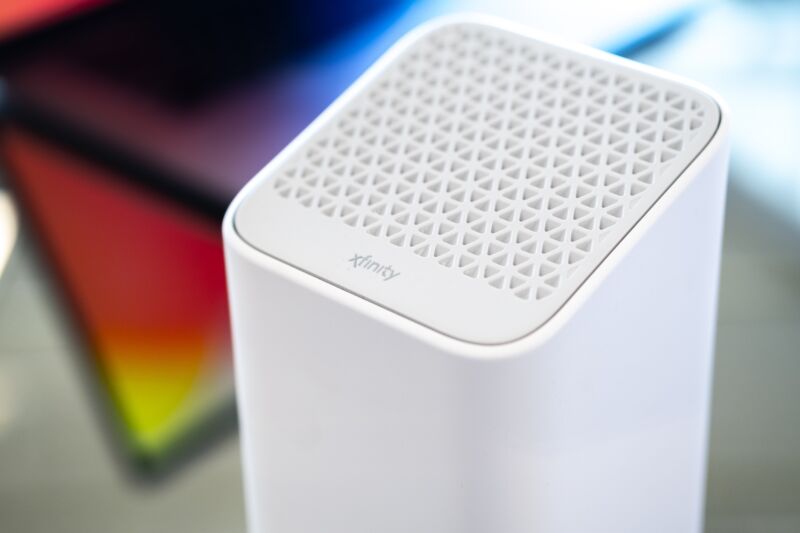 Comcast announced today that it has tested “the final technical component needed to deliver symmetric multi-gigabit speeds” and said it is on track to deliver multi-gigabit download and upload speeds to at least some cable customers “before the end of 2023.” The test using Broadcom equipment delivered speeds of 6 Gbps download and 4 Gbps upload, Comcast said.

Cable broadband lags far behind fiber to the home in upload speeds, a frustration for many Internet users who don’t have access to fiber. Comcast and other cable companies have been promising a major upload upgrade for years without saying exactly when the upgrade would reach customers.

Comcast is starting to get a little more specific, though that “late 2023” promise doesn’t specify what percentage of customers will get the update when it’s first rolled out. Upgrading Comcast’s entire cable territory is expected to be a multi-year process.

“Once this trial is complete, Comcast will launch live trials later this year and begin delivering 10G-enabled multi-gigabit symmetric services to customers before the end of 2023,” Comcast said. (10G is a marketing term the cable industry uses to describe speeds of 10 gigabits per second.)

Comcast did not say how much it will charge customers for the symmetric multi-gigabit service or whether the upgrade will be combined with any changes to the data cap imposed in most of Comcast’s territory. Although the upgrade won’t require replacing the cables going into customers’ homes, it will take a few years to install all the right equipment throughout Comcast’s network.

In October 2017, the CableLabs industry research and development consortium announced the completion of a DOCSIS version that could provide 10 Gbps upload and download speeds. Seemingly envious of the hype about 5G wireless networks, cable lobby group NCTA launched a “10G” marketing campaign in January 2019. promised”symmetric speeds that are up to 10 times faster than today’s fastest networks.

But actual upload speeds have remained stubbornly low on cable networks, which were originally designed for delivery of TV programming rather than broadband. Comcast cable upload speeds topped 35 Mbps for many years, and customers had to buy the most expensive gigabit download plan just to get 35 Mbps uploads. Upload speeds on the cheapest plans were so low like 3 Mbps, as we wrote last year.

But that is starting to change. Comcast on September 8 announced availability of multi-gigabit cable download speeds and upload speeds ranging from 75 Mbps to 200 Mbps, but only in certain markets at first (Colorado Springs, Colorado; Augusta, Georgia; and Panama City Beach, Florida).

Comcast has also been selling symmetrical fiber-to-the-home internet since 2015 but at much higher prices than cable and not throughout its territory. DOCSIS upgrades that will extend multi-gigabit symmetric speeds to Comcast cable are expected to be offered at prices more affordable than Comcast fiber, which costs $300 per month.

The delivery of symmetric multi-gigabit speeds over existing cables will be achieved with the “Full Duplex” upgrade to DOCSIS, the data-over-cable service interface specification used throughout the industry. Comcast said:

Comcast previously successfully completed the world’s first 10G trials the net other modem technologies, including demonstrating a full 10G network-to-home loop. The test, announced today in SCTE EXPO, showcased the ability to deliver Full Duplex DOCSIS 4.0 (FDX) services through newly designed FDX amplifiers. FDX was originally designed for network environments without RF amplifiers, so the new FDX amplifiers make it much easier to extend the benefits of 10G to all customers within range of the network.

For the test, Comcast inserted new 10G boosters, based on a reference design developed by Broadcom, into a full 10G network loop using previously tested DOCSIS 4.0 modem and network technologies. The team demonstrated 6 Gbps download speeds and 4 Gbps upload speeds in a full cascade of six amplifiers, sometimes called “N+6.” This architecture encompasses the vast majority of Comcast’s network and is easily and quickly replicated where network environments may differ. As a result, the successful trial is key to delivering 10G to all Comcast customers.

In addition to the upload and download increases, Comcast said the update “will drive significant latency performance improvements.”

Although the full-duplex upgrade likely won’t happen as quickly as customers want, Comcast highlighted the advantage of being able to upgrade speeds without replacing cables. The DOCSIS update will allow Internet providers to “deliver improved speeds and performance to hundreds of millions of people over the connections already installed in their homes, without the need to dig up yards and neighborhoods, or pick and choose who gets faster speeds and who does not”. t,” Comcast said.

Take a look at these ‘staggering numbers’ since Biden took office compared to where they are today – twitchy.com

When it comes to how things are going economically in the US, the Biden White House has only one possible strategy, and that is...
Read more

NASA delays launch of lunar rocket due to possible hurricane

CAPE CANAVERAL, Florida. -- NASA skips next week's attempted launch of its new lunar rocket due to a tropical storm that is expected...
Read more