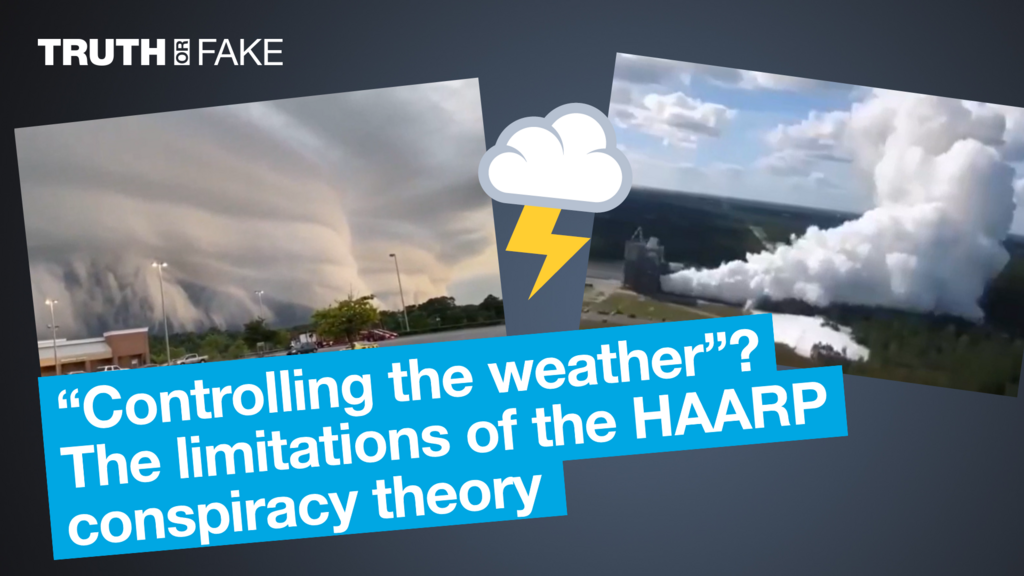 Forest fires, floods and hurricanes … for some, all the natural disasters we saw last summer are linked to the same thing: a secret climate control weapon supposedly belonging to the US military called HAARP. The Truth or Fake team took a closer look at this conspiracy theory.

From deadly floods in China to massive forest fires in Turkey, people online have been talking about the natural disasters we saw in the summer of 2021. But some, especially on TikTok and Twitter, say that weather events like these are caused by something. called HAARP, a so-called climate control device used by the US government.

Floods in Germany. I never remember anything like this in summer in my life. It’s just me? Or is it weather warfare with HAARP? pic.twitter.com/7D0u6bjRLq


HAARP stands for High Frequency Active Auroral Research Program, a project based in an observatory in Alaska that studies the upper atmosphere using radio transmitters. These devices heat small parts of the air above the site.

But the science behind the program is complex and has given rise to numerous far-fetched theories. The Truth or Fake team spoke to Mick West, a science writer who specializes in this type of conspiracy theory.

The way to debunk the HAARP conspiracy theory is to try to explain to people exactly what it does. Explain to them that it is just a radio transmitter that is located in one place in Alaska and that it can only affect a small amount of air above it. Explain that the actual power used by this radio transmitter is very very small compared to what you would actually need if you actually wanted to do some of the things that are suggested.

However, some proponents of the theory believe that there are hidden HAARP devices all over the world. They also took some videos out of context to convince others of the existence of this secret weapon. This is what happened with a video of an electrical system in Brazil it was demolished in 2017. Some claimed that the installation was actually a HAARP antenna.

>> To learn more about The Observers: No, this video does not show Brazilians shooting down an American time control weapon

The teams working on HAARP are aware of the numerous rumors and theories that revolve around the project and therefore try to answer as many questions as possible about their work. On the FAQ on their website, answer questions like “Is HAARP creating chemtrails?” and they even open their doors once a year to show people what they are really doing in Alaska.

But, as Mick West explains, the idea that humans can control aspects of time is not entirely far-fetched. Some countries, like China and Russia have been working on time control projects for several years. But, for now, we only have the technology to do things like create rain or disperse fog on a small scale.

But “geoengineering,” or the process of changing climate on a much larger scale, is one way it is studied more and more. For example, some scientists are working on ideas like spraying particles into the sky to block sunlight to fight global warming or change the trajectory of hurricanes, but to date they haven’t had very convincing results.