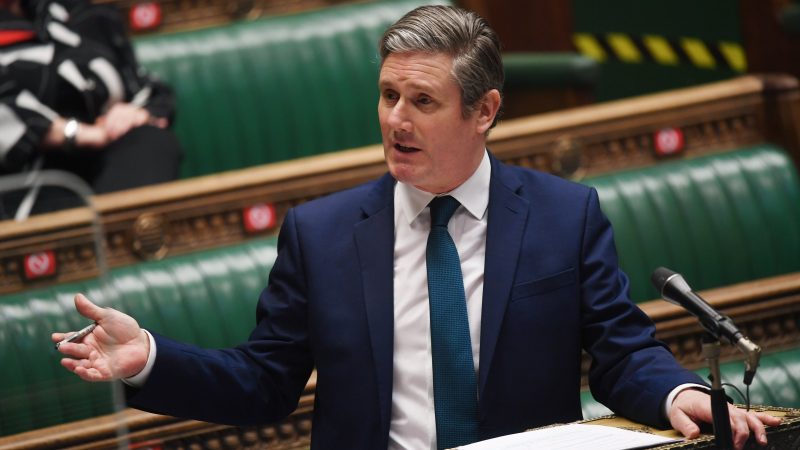 The world is on track for “devastating” global warming even if all commitments made by countries at COP26 to reduce emissions by 2030 will be fully implemented, warned Keir Starmer, describing the commitments as “still very short”.

Following a statement by Boris Johnson on today’s climate summit, the Labor leader praised COP chairman Alok Sharma and his team and said they “knew that COP26 was the most important international summit ever hosted on these shores. “.

“In Paris we set ourselves the goal of limiting global warming to 1.5 ° C. This is the tipping point beyond which – beyond that, the world is set to see billions of people facing extreme heatwaves, countless millions displaced from their homes and the destruction of natural wonders, “he added.

“Science does not negotiate and no politician can move the goal post. To have a 1.5 ° C hopeful, we need to halve global emissions by 2030. Glasgow’s task was to come up with credible plans to make it happen, but while the summit was one of modest progress, we can’t be fooled: plans to cut back emissions are still very low.

“The commitments made in Glasgow for 2030, even if all fully implemented, represent less than 25% of the required ambition. Instead of a manageable 1.5C, they put us on track for a devastating 2.4C. Which is why, according to the UN Secretary-General, the 1.5C target is now on the stand. vital”.

The Prime Minister told MPs today that the conference was a summit that “proved the skeptics and cynics wrong,” stating: “COP 26 didn’t just keep 1.5 ° C alive, it succeeded. to do something no United Nations climate conference has ever done before – uniting the world in calling time on coal. “

Experts and activists criticized the agreement reached at the end of the conference. India and China have imposed a last-minute change to the wording of the agreement, committing signatories to “gradually reduce” rather than “phase out” the use of coal. The deal left Alok Sharma visibly upset when the summit closes.

Johnson said at a press conference on Sunday: “Whether the language is progressively reduced or phased out it doesn’t seem to me that, as an English speaker, it makes that much difference. The direction of travel is more or less the same “.

Scientists said prior to COP26 that greenhouse gas emissions must decrease by about 45% over this decade for global temperatures to remain within 1.5 ° C of pre-industrial levels. Countries were asked to come to the top with plans to reach net zero by mid-century and national short-term reduction targets by 2030.

The government said “190 countries and organizations” agreed to end the use of coal at the summit. Starmer pointed out that only 46 of the signatories to this agreement were countries, of these only 23 were new signatories, of those ten do not use coal and that it did not include the largest users: China, the United States, India and Australia.

“Without any pressure from the public, the major emitters were encouraged and united to comply with the wording of the main coal deal. Only someone who thinks the words are meaningless now could argue that a deal to phase out coal is the same as a deal to phase it out, ”the Labor leader said this afternoon.

“The Prime Minister is right that we need to fuel coal and phase out fossil fuels, but his ability to lead the issue internationally has been hampered by his actions at home,” Starmer added.

“It never made sense for the government to flirt with a new coal mine or give the green light to a Cambo oil field. So will he rewrite the urban framework to exclude coal and now say no to Cambo? “

According to a report released last weekThe short-term goals set by the top countries would lead to temperatures above 2.4 ° C by the end of this century, wreaking havoc around the world.

Climate Action Tracker’s estimate runs counter to an assessment of countries’ long-term commitments at the conference, such as India’s to hit net zero by 2070, which suggested warming could be kept at 1.9 ° C or 1.8 ° C.

Climate Action Tracker found that emissions will double in 2030 of those needed to stay within 1.5 ° C and analysts have identified a gap between what countries have said they will do about limiting emissions and their plans in reality. .

Below is the full text of Starmer’s response to Johnson’s statement.

Thank you, Mr. President. I want to pay tribute to the president of the COP. Whatever the shortcomings of the agreement, his diligence, integrity and commitment to the climate are evident to everyone and his team of civil servants. Their dedication, their competence, their service. Never in doubt, but always remarkable. They knew that COP26 was the most important international summit ever hosted on these shores. Why? The simple math of the climate crisis.

In Paris, we set a goal of limiting global warming to 1.5 degrees. This is the tipping point beyond which the world is destined to see: billions of people facing extreme heatwaves; countless millions of people displaced from their homes; and the destruction of natural wonders such as the world’s coral reefs. Science does not negotiate and no politician can move the stakes. To have any 1.5 degrees hope we need to halve global emissions by 2030.

Glasgow’s job was to come up with credible plans to make it happen, and although the summit has made modest progress, we cannot delude ourselves. Plans to reduce emissions are still insufficient. Commitments made in Glasgow for 2030 – even if fully implemented – represent less than 25% of the required ambition. Instead of the manageable 1.5 degrees, they put us on the track for a devastating 2.4 degrees. That is why – according to the UN Secretary General – the 1.5 degree target is now left on “life support”.

So now we have to provide intensive care. Start by being honest about what went wrong. The summit was held back by a naïve reminder that only served to encourage the big emitters. The Prime Minister praised the inadequate net-zero plans. Australia has been called heroic, even though their plan was slow enough to be in line with 4 degrees of global warming. By providing this coverage we have had little chance of exerting influence on other large emitters and we have seen many other disappointing national plans.

The Prime Minister has dressed the modest sectoral commitments as transformative. Earlier in COP, the government said “190 countries and organizations” had decided to end coal. On closer inspection: only 46 of them were villages; of these only 23 were new signatories; of those 23, 10 don’t even use coal! And the 13 that remained did not include the largest coal users: China, the United States, India and Australia.

Without public pressure, the large emitters were encouraged and united to abide by the wording of the main coal deal. Only those who think the words are meaningless now could argue that an agreement to phase out coal amounts to an agreement to phase it out. And there was the long-awaited $ 100 billion in climate finance. It has not yet been delivered even though this money was promised to developing countries more than ten years ago.

Failure to deliver has hurt confidence and created a huge obstacle to coalition building that can drive climate action between the most vulnerable developing countries and the ambitious developed countries. That coalition formed the basis of the historic 2015 Paris Agreement, creating a pincer movement to maximize pressure on the world’s largest emitters, including China.

It is deeply regrettable that there was no repeat in Glasgow. Instead, developing countries still had to defend the $ 100 billion long pledged in the closing hours of this summit. Given all this and the imperative to restore 1.5 degrees from life support, the question is: what will change in the coming year ahead of COP27?

Great Britain has a special responsibility as the COP chair. First, we need to reassemble the Paris climate coalition and build trust with the developing world. But cutting foreign aid does not create trust, it destroys it. So is the prime minister going to cancel the cuts immediately?

Secondly, there can be no free passes for major issuers. Including our friends. We are making a trade deal with Australia, where we have allowed them to drop their Paris temperature commitments. It was a mistake. Will the premier fix it?

Third, the Prime Minister is right that we need to fuel coal and phase out fossil fuels. But his ability to lead the issue internationally has been hampered by his actions at home. It never made sense for the government to flirt with a new coal mine or give the green light to the Cambo Oil field. Will it rewrite the planning framework to exclude coal? And now he will say no to Cambo?

In the end, will the Chancellor resolve? The budget, delivered the week before COP26, when world leaders started arriving on these shores, didn’t even mention climate change, granted tax relief for domestic flights, and was sadly below the investment needed to providing green jobs and a just transition.

Mr. President, the Prime Minister was the wrong man, in the wrong place, at the wrong time. And Glasgow was a missed opportunity: a step forward when we needed to make big strides, a further climate delay when we needed a birth and 1.5 degrees are now on life support. We still have the ability to keep 1.5 degrees alive but only with intensive care. We need to speak honestly about the challenge we face to rebuild the coalition we need and to address the big emitters. We can and must change course.