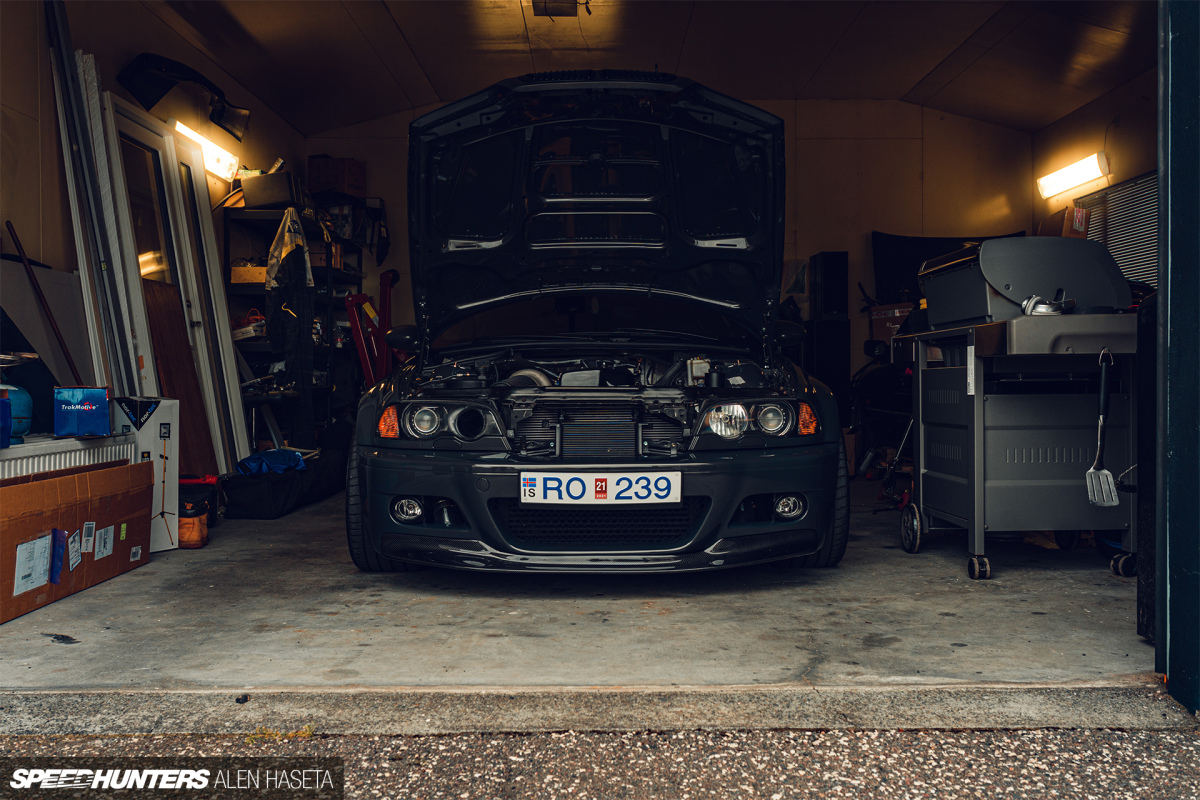 My annual homecoming trip to Iceland took an unexpected turn this year when I got the chance to explore the modified local automotive scene. I’ve shot four cars in total, and over the next short period, starting today, I’ll tell you those stories.

It started with a simple post on Facebook. I met with Ingi Haraldsson, now a good friend of mine, and took a drive to Keflavík, just over 30 miles from the Icelandic capital of Reykjavík. Here we visited Sævar Þorri Gudlaugsson, who couldn’t wait to show us what he has hidden in his garage.

Sævar’s interest in cars began at a young age, thanks largely to his cousin who led him to brisk rides in the countryside on old dirt roads. He was passionate about BMW, so of course Sævar was also interested in them.

In 2013, Sævar bought his first BMW, a 316i from 84. This E30 was in use for about a year, before being parked in its garage for a performance review. You see, over the course of those odd first 12 months with BMW as his daily driver, Sævar became interested in the A80 Toyota Supras, and in particular their 2JZ-GTE powertrains. So when a freshly imported VVTi engine went on sale locally, it jumped at the opportunity to re-power the E30.

The idea was simple: buy the engine, trade it in the BMW compartment and enjoy. But as we know, ideas and realities are often two different things. Sævar was a student at the time and became a father shortly after graduation, so the project was suspended indefinitely.

For the next time, Sævar mulled over the E30 x 2JZ mash-up, and the more he thought about it, the more he didn’t really fit in with what he wanted to achieve: a daily rider capable of turning fast ETs on the drag strip. During this time Sævar owned a few more BMWs, but when a friend offered an E46 M3 with a burnt engine for sale, it was too good an opportunity to pass up.

E46 M3 with a burned out S54 engine and a 2JZ-GTE VVTi sitting in the garage … I’m sure you can see where it’s going.

While it’s not the E30 re-power he originally envisioned, you can bet Sævar is happy with the way this 2JZ trade has unfolded. Rebuilt from Promoters / Samvélar Iceland, Toyota’s straight-six now delivers 591 Whp with 98 RON gasoline thanks to a range of power generation components that include a BorgWarner AirWerks S366SX 66mm twin-scroll turbocharger on a DWK exhaust manifold and intake Madcat with a modified LS3 throttle body, Plus, much more. (Check out the full specs at the end of the story).

Sævars’ goal was a 10-second car in a quarter-mile, and while it may not reach that level of performance with this current engine configuration, it is planning a switch to E85 fuel and a power boost it will see from 700 to 800 hp.

Currently, the transmission is based on the original Getrag 420G 6-speed manual transmission, differential and axles from the M3, but helping the cause is a Tilton three-plate clutch.

To set up the frame for drag racing, BC Racing RM Series coilovers and Powerflex adjustable rear camber arms were fitted. Among many other suspension upgrades, the rear subframe has been reinforced with a BimmerWorld bottom brace kit.

Working in the body shop business as an auto painter, Sævars knew exactly what he wanted to achieve when it came to the exterior of the M3, and the screams definitely weren’t. It kept things simple and clean with an SSDD Motorsport front lip and a Turner Motorsport carbon diffuser and trunk lip. The color is BMW Individual C36 Dravit Gray Metallic.

Inside is a similar story; There’s a 4-point roll cage, OMP race seats with 6-point Turn One belts, and a body-mounted BimmerWorld shifter.

In addition to the help he received with rebuilding the engine and the roll cage, Sævar did most of the work here on his own. It is also just “phase one”; the wheels are already in motion for the next stage which will feature bigger brakes (currently running the stock M3 configuration), a carbon roof and other goodies, not to mention the E85 fuel system and tuning.

While this E46 M3 has really become Sævars’ main focus, don’t think for a moment that he’s ditched his original E30 – it’s still in the garage, albeit partially buried right now. It will see the light of day again, and when it does I’m sure it will emerge as something special.

Stories related to the BMW M3 on Speedhunters