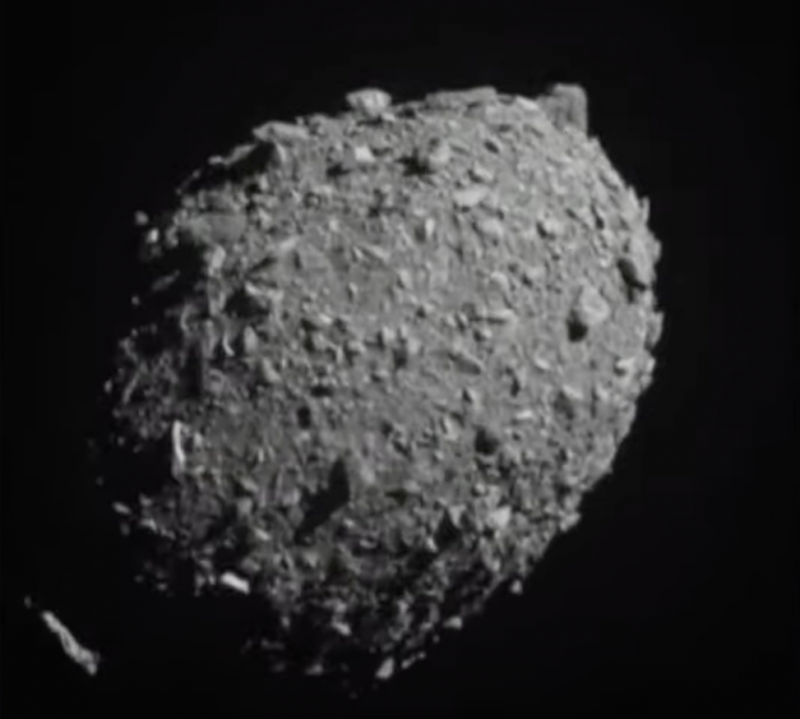 About 24 hours before the collision, NASA’s Double Asteroid Redirection Test (DART) probe made its last course correction based on commands sent by ground controllers. “It’s aimed at a center body football field,” said Bobby Braun of the Johns Hopkins Applied Physics Laboratory (APL). “That last move was spot on.”

Even at this late stage, DART’s onboard camera was unable to identify its ultimate target, the small asteroid Dimorphos, so the central body it was targeting is Dimorphos’s orbiting companion, called Didymos. DART’s onboard navigation could not begin navigating to its target until it could see it, which was expected to be about 90 minutes before impact. At that moment, the navigation began to adjust DART’s course so that it headed directly for Dimorphos. Ground controllers, separated by about a minute of communications time, could only watch.

“Space is full of moments, and hopefully we’ll have a moment tonight,” Braun said.

Everything worked. Images from the DRACO camera showed Dimorphos getting closer and closer during the last few minutes before the collision, eventually covering the entire field of view. And then, in a moment that would normally indicate disaster, the transmissions stopped midway through the final image. “What we’re rooting for is the loss of spacecraft, so it’s different,” Braun had said earlier in the day.

As for the details of that impact, we’ll have to wait. The best images we’ll get are from an Italian Cubesat called LICIACube that has been following DART since they split up a few weeks ago. LICIACube will be about 50 km from the point of impact and will come even closer for three minutes after impact before passing behind Dimorphos. But it will take some time to transmit the images to Earth, possibly a day or more to process and publish them.

Therefore, the first images are likely to come from ground-based observatories, which are looking for the glow caused by the column of debris that extends from the point of impact. Asked how much ground-based hardware went into looking at the plume, Cristina Thomas of Northern Arizona University said, “I don’t know, but there are so many, it’s very exciting to have lost count.” APL’s Nancy Chabot said the count was up to three dozen, and they will be joined by the Hubble and Webb Space Telescopes. Some of those images are likely to appear online tomorrow.

The exact details of the debris plume can potentially tell us a lot about the asteroid’s interior and help us design planetary defense hardware. But that level of analysis will take months, with many computer models being compared to images from multiple sources to try to understand what happened.

NASA is about to hold a press conference on the results, so we’ll see if any details or images are released and update this story accordingly.

Updated at 20:40: Not much news from the press conference. Most of the information is that there is a window just before midnight where LICIACube could send impact images via NASA’s Deep Space Network. It’s unclear if everything will pan out, but those might be the first details we see. Initial estimates are that the impact occurred within 17 meters of the asteroid’s center, but APL’s Lena Adams said the shadow over part of the asteroid made the center a bit difficult to identify.

A minor fact that came to light is that there was still a significant amount of hydrazine and xenon propellant on board when it hit, which could influence the ejection of debris from the surface.

Items to keep on your nightstand for a good night’s sleep, according to a sleep expert

BuzzFeed may collect a share of sales or other compensation from links on this page if you choose to purchase...
Read more