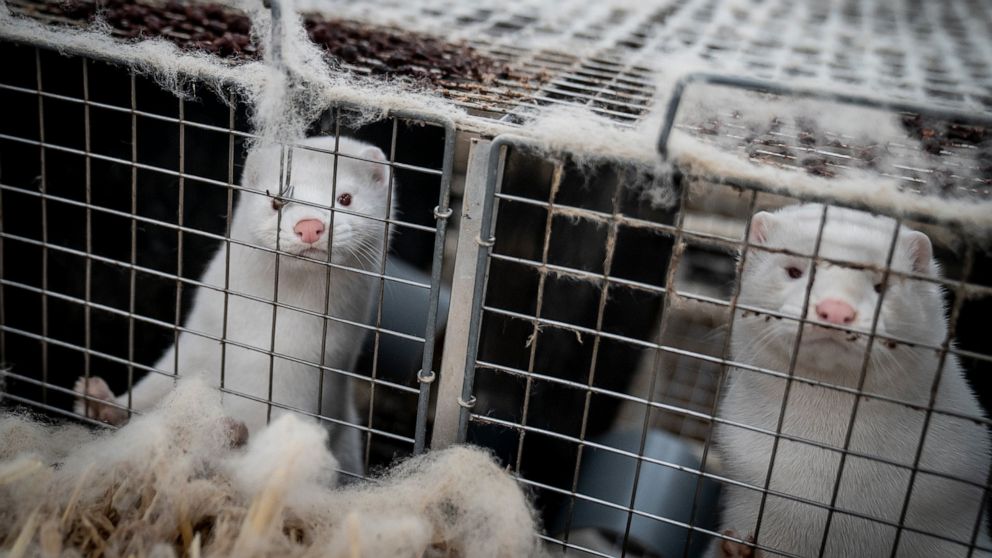 Copenhagen, Denmark — Denmark’s government said Friday that a temporary ban on mink farming will expire on January 1, allowing mink production in the country to resume, but at a “significantly reduced” level than before the coronavirus pandemic. coronavirus.

Nearly two years ago, the government ordered the culling of millions of mink and banned their breeding to minimize the risk of the small mammals relaying the virus to contain a mutated version that could spread to people.

The ban was originally due to expire at the end of 2021, but it was extended for a year. As of January 1, it will again be allowed to keep minks in Denmark.

It was not immediately clear if there would be a cap on the number of animals per farm. There will be limits on the number of people allowed to visit farms, and farmers will be required to record the names of visitors.

The government said the decision to lift the temporary ban was based on an assessment by the Statens Serum Institut, a government agency that maps the spread of disease in Denmark.

Food, Agriculture and Fisheries Minister Rasmus Prehn and institute officials plan to meet later Friday with representatives of the Danish mink industry to “review infection prevention measures for the industry.”

The government said health and veterinary authorities have drawn up a model with requirements for managing COVID-19 in mink herds that farmers must “implement and comply with in order to have minks again after the turn of the year.”

“There is absolutely no good reason to reopen large mink farms with millions of animals crammed into tiny wire cages until they are killed for their fur,” said Britta Riis, director of Animal Protection Denmark. “It’s bad for animals, the environment and the climate.”

“Keeping mink in existing cages is not acceptable,” he said, adding that several European countries have banned or are phasing out mink farming. On Thursday, Latvia became the latest country to ban mink farming from 2028.

Denmark was one of the world’s leading exporters of mink fur, with an estimated production of 17 million fur per year. Copenhagen Fur, a cooperative of 1,500 Danish breeders, accounts for 40% of the world’s mink production. Most of its exports went to China and Hong Kong.

The 2020 decision to wipe out Denmark’s entire captive mink population generated strong controversy, particularly as the legislation necessary for such a drastic move was put in place more than a month after the slaughter began.

In June 2022, a parliament-appointed commission heavily criticized the Danish government for its decision to cull millions of healthy mink. The report said Prime Minister Mette Frederiksen had been “extremely misleading” during a 2020 press conference when she announced that all mink, both infected and healthy animals, should be euthanized. The report also criticized other senior Danish officials.

Authorities arrested 141 people in Southern California, most on suspicion of possessing child sexual abuse material, as part of a week-long operation against online...
Read more

His father’s death forces Blinken to leave the UN

“Dad inspired me to public service. He lived with decency, dignity and modesty. He loved his wife Vera and his family. ...
Read more

To the stumbles of ESG champions