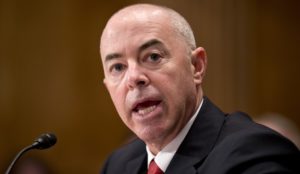 A new bulletin the Homeland Security Department took effect Thursday and notes that “the homeland continues to face a diverse and challenging environment of threat.” Hey, that’s great news! The terrorist threat is now officially “different” – that’s a good thing, right? Diversity is our strength! The diversity, in this case, includes both “internal violent extremists and those inspired or motivated by foreign terrorists and other malicious foreign influences,” but it is clear that the feds are more concerned about those internal violent extremists. Like USA Today noticed in his report on the new DHS bulletin, “In September, FBI Director Christopher Wray referred to the growing domestic terrorist threat, telling a Senate committee that domestic terror cases had more than doubled since early 2020. “. Of course they did. But is it because there are more cases of domestic terrorism or because the feds are now aggressively looking for some to validate their claims?

The DHS bulletin warned of the possibility of terrorist attacks in the coming weeks as “several religious holidays and associated mass gatherings” “which in the past have served as potential targets for acts of violence” are approaching. At the same time, however, officials admitted that intelligence agencies found no “imminent and credible threat to a specific location in the United States.”

The threats they are really concerned about are those that allegedly come from alleged right-wing extremists who are enraged by Biden’s gallop to authoritarianism: “The ongoing global pandemic continues to exacerbate these threats, in part due to the alleged excessive reach. of the government in the implementation of health security measures “.

Oh yes, there are jihadists out there too: “Furthermore, foreign terrorist organizations and (internal violent extremists) continue to try to inspire potential followers to carry out attacks in the United States, including by exploiting the recent events in Afghanistan.” This is because al Qaeda and ISIS “celebrated the perceived victories over the United States and encouraged the use of violence by their followers and supporters to further their goals. These foreign terrorist organizations are likely to continue to maintain a highly visible online presence in an effort to inspire US-based individuals to engage in violent activity. “

The part about jihadists perhaps plotting to strike inside the United States is certainly true, and there are abundant claims from the open and unrepentant words of the jihadists themselves. But the clear implication of the DHS bulletin – that the threat jihadists pose to the United States is secondary to a terrorist threat from Americans who are angered by the federal government’s outrageous breakthrough in the months that Joe Biden faked himself President of the United States —It is as unfounded as it is disturbing.