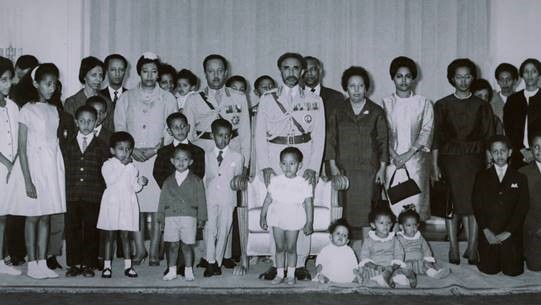 Constance Marks is an award-winning independent documentary director, producer and director. She is the founder and president of Constance Marks Productions, Inc., a documentary production company based in New York City. His productions include “Being Elmo: A Puppeteer’s Journey,” which won the Special Jury Prize at the Sundance Film Festival, and “Green Chimneys,” a documentary that premiered at the Sundance Film Festival and aired on HBO. Marks has produced over 40 films for non-profit organizations focusing on important social issues.

“Grandfather Was an Emperor” begins screening at the 2021 DOC NYC Film Festival on November 14th. The festival runs from 10 to 28 November.

CM: “Grandfather Was an Emperor” follows the story of Yeshi Kassa, the great-granddaughter of Haile Selassie, the last emperor of Ethiopia, as she tries to reconcile her family’s complicated political and cultural heritage.

As Yeshi reopens old wounds and returns to Ethiopia, he uncovers the long-buried secrets of his family’s exile and the price of power, but also the intense bonds that bind us as people.

CM: I was attracted to Yeshi first, then to his family history. The night I met Yeshi, I saw her gently and respectfully kneel and give her gloves to a homeless man. With genuine ease, she talked to him for a long time, and I immediately wanted to get to know her better. We were both volunteers for the annual New York homeless count and were randomly placed in the same group. I didn’t know that his great-grandfather was Emperor Haile Selassie of Ethiopia – who was overthrown in 1974 in a bloody coup – until after. We became friends before there was any talk of recording his family history for the first time.

CM: How is it possible that I never knew this story?

CM: Change. We were dealing with multiple plots with this complex and massive story – the editing team dubbed it “the octopus.”

CM: I financed the film with the proceeds of my latest feature-length documentary, “Being Elmo: the journey of a puppeteer”.

CM: I don’t remember ever wanting to be a director. My production partner, Corinne LaPook, was in my eighth grade film class with me.

CM: Best movie tip: Never say what you can imply, and if it doesn’t advance the story, lose it.

Worse: I must have downloaded bad advice. Nobody comes to mind.

CM: There are so many! “Harlan County, USA” by Barbara Kopple [stands out] – her moxie is stunning.

CM: I bought a sewing machine and tons of fabric with the aim of resuming quilting after a 20-year hiatus. He’s gathering dust in the corner because I’m working on my films.

CM: To begin with, we need to educate ourselves. Read. Discover negative stereotypes on screen and observe their own hiring practices. This is a start.