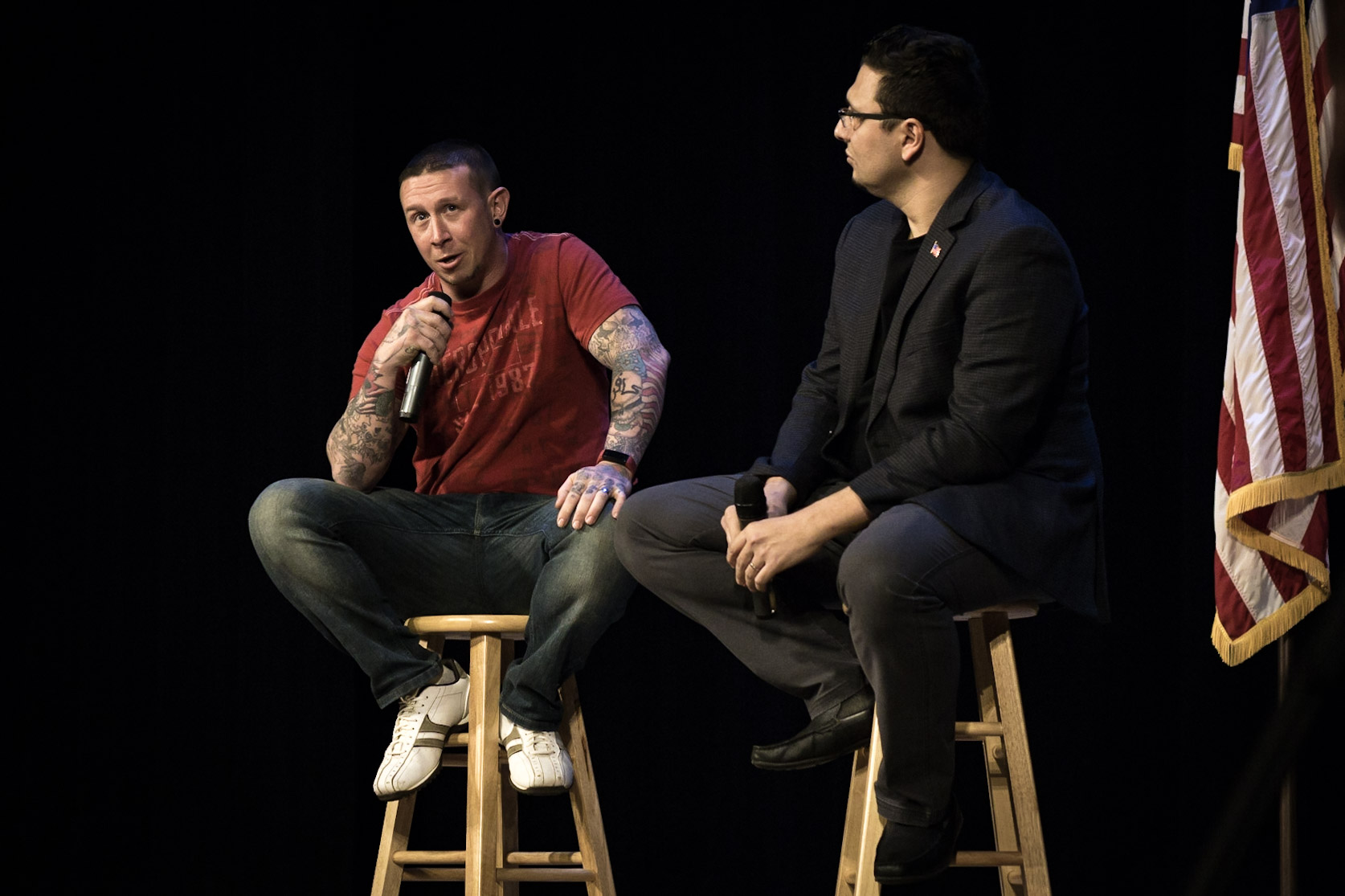 Erin Bernhardt is an independent director. He has won two Peabody Awards, an Emmy and numerous film festival awards. His first independent documentary, “Imba Means Sing”, aired worldwide on Netflix, Delta Studio and all major VOD platforms. Bernhardt earlier he served on the Peace Corps in Madagascar, as a writer / producer at CNN, and as a director of engagement for the Points of Light foundation.

Din Blankenship is an architecture designer turned director. She designed transitional shelters for refugees and was invited to present her work at the Symposium for Disaster Relief Architecture. In 2021, Blankenship founded Late Bloomer Films and is currently in pre-production on “Love, Your Birth Mom,” a documentary that follows several women with unplanned pregnancies who are considering adoption.

“Refuge” begins screening at the DOC NYC Film Festival 2021 on November 13th. The festival runs from 10 to 28 November.

EB&DB: “Refuge” follows two men from different worlds but on the same journey – to find healing and acceptance in a broken America. Chris Buckley is a war veteran, recovering drug addict and former KKK leader with a virulent hatred of Muslims. Dr Heval Kelli is a Syrian Kurdish refugee trying to build a new life in Clarkston, Georgia, home to resettled refugees from around the world. Heval and the Clarkston community survived extremism and oppression in their home countries and now face a new kind of threat: American white nationalism.

In essence, this is a film about the pursuit of acceptance, healing and belonging. It’s about the tension between fear and love and the transforming power of dealing with hatred with humanity. This story captures our shared desire for safety and a safe space to carry our pain and trauma, our need for refuge.

EB&DB: When we first decided to make this film, we were doing it in response to the 2017 Unite the Right riots in Charlottesville. We both – and one of our executive producers, Katie Couric – went to UVA [University of Virginia, in Charlottesville], and watching such a hateful incident happen in a place that has shaped women feels like a call to action. Our initial instinct was to find a story that could act as a counter-narrative to white nationalism and refute its insidious ideologies. If white nationalism claims that non-white immigration is harming our country, we wanted to find a story in which non-white immigrants were not only not a threat to our country, but actually contributed to the prosperity of our communities. The story we were looking for was in our backyard, Clarkston, Georgia.

It wasn’t until months of filming in Clarkston that one of our main characters, Heval, was introduced to Chris. When we think back to our initial goal of making the film, we wanted to create something that could play a role in fighting hatred and extremism. By capturing Chris’s journey, we discovered the roots of hatred, what can lead a person to hateful ideologies, and ultimately, how they can be overcome, all against the backdrop of a community of survivors of hatred and extremism, Clarkston , GA.

EB&DB: We hope that after seeing “Refuge” people will consider the prejudices they have, examine why they hold them and commit to addressing them. We hope that people consider the polarized state of our world and consider their own guilt in that reality before blaming someone else.

Ultimately, we hope this film awakens our sense of empathy for one another. We captured the story of a community that insists that their shared humanity is more important than any type of shared ethnicity, faith, or even shared language. We hope that anyone who watches it can see themselves in all the characters. If people get out of this movie and are more likely to offer compassion to someone who is different from them – someone of a different race, a different faith, a different political creed – then we feel the film will have been a success.

EB&DB: This was a hard films to make for several reasons. First, trying to make a movie moving people across the political spectrum in 2021 is a tall order. got us many revisions to find the sweet spot of inviting our audience – regardless of the politician affiliation – questioning assumptions, without putting anyone on your heels e eventually closing the film.

Secondly, because the film underwent a huge change when Chris entered Heval’s life, for a long time the film seemed to have a divided identity – era this is a movie about Chris overcoming his hatred, or a movie about Heval and the community by Clarkston? It took a long time to really get into our story arc and secure that the story had clarity and focus.

EB&DB: We have garnered support in various ways from hundreds of generous people and organizations. We have taken on impact investments from angel investors. We made a crowdfunding campaign. We threw fundraising parties with our amazing executive P.rodents. We have shared our passion and dedication for this story with everyone who would listen. We invited our networks to bring their networks to the table to help us. We have applied for dozens and dozens and dozens of grants and have been honored by you actually get one – thank you, SDF [Southern Documentary Fund]! We brought thoughtful movie lovers from all over the country who care about the issues addressed in our film to share a cup of coffee at Clarkston Refuge Coffee.

To those of you who have helped to help make this movie: thank you!

DB: My background is in architecture. Before filming, I was designing temporary refugee shelters, affordable home housing, mixed-use buildings, and charter schools. I have always been passionate about using my skills to shape a more just and equitable world, but it was only when Erin invited me to join her on “Refuge” that I realized my architectural design skills could be transferred. at Cinema.

I have always been fascinated by a well-told story and have personally benefited from documentaries’ unique insights into unknown lives and worlds. Knowing that I could be part of creating a story that could provide the world with much needed healing and hope at a time when we so desperately needed it was truly compelling for me.

EB: My background is in journalism. I grew up observing and being inspired by powerful women like Katie Couric, Christiane Amanpour and Pat Mitchell, who not only broke down the barriers for women in journalism, but told stories that offered us insights and nuances. When I saw the documentary “Born into Brothels” and the impact it had, I realized that I wanted to create films with a similar impact.

EB&DB: We both have amazing mentors in our lives, so it’s hard to pick just one piece of advice. One thing we both come back to when making decisions is something Erin’s mom often says, “When your head and heart are pointing in the same direction, follow, no matter how scary it sounds.”

Fortunately, we cannot think of the bad advice we have received.

EB&DB: This work is hard, but it is really worth it. Our world needs stories creatively shaped by women. Stay in touch with other women in the industry as community is vital for survival.

So, find a great therapist!

DB: How to choose just one? I’ll have to go with “Little Women” directed by Greta Gerwig. This film moved me. Looking at it, I felt a conflicted sense of pain and anger at the difficulties faced only by women and amazed at what women are capable of. I saw the film just a few days after it was announced that while the film had been nominated for a number of Academy Awards including Best Picture, Gerwig had not been nominated for Best Director. Watching Jo struggle to create meaningful art in a male-dominated industry in the 1860s, I couldn’t help but see the film’s director – and myself – face the same obstacles today.

EB: “For Sama” by Waad Al-Kateab and Edward Watts. It’s so intimate, honest and terrifying, but still with a glimmer of hope, and the film I most wish everyone in the world to see has more empathy for refugees, women and new mothers – three of my biggest passions.

DB: I definitely feel the burden of having lived in this world where previously mundane decisions now seem like high-risk decisions. Do I have to spend time with my family at home? Is it safe to go out for dinner? Should we have a babysitter at our home? Does my baby have another runny nose or is it COVID? I’m tired, all of you.

Working on “Refuge” has certainly given me hope and energy as we continue to sail this season. I am also developing my next film, “Love, Your Birth Mom”, which will follow several women with unplanned pregnancies who are considering adoption. The story touches on several topics that many people are passionate about, yet few people understand the lived experience of being pregnant and accept that you may not have the resources, the ability or the ability to raise your child.

I am a foster mom and my film partner is a natural mom. Hopefully this story will illustrate to our children and other adoptees that they weren’t “surrendered,” but that the decision made by their birth mothers was heavy, complex and courageous, and marked by grief and loss.

EB: Half the time I think we’re in a nightmare and can’t wait to wake up, the other half I’m grateful to still have my loved ones around me and for the extra time I got to spend with mine son from the first six months of his life were extremely difficult. He was a “unable to grow up” child and I had severe postpartum depression. As hard as 2020 and 2021 are, they are not comparable to 2019. Let’s just say 2022 feels like rainbows and butterflies!

Finally, I think all my creativity goes into our family Halloween costumes.

W&H: The film industry has a long history of under-representing people of color on screen and behind the scenes and reinforcing – and creating – negative stereotypes. What actions do you think should be taken to make the doc world more inclusive?

EB&DB: Preach! We need to work on this at all levels of the industry. One way “Refuge” made a small dent was to create a workforce development program within our film crew. We trained and hired refugees and others underrepresented in the film industry to be part of our team.