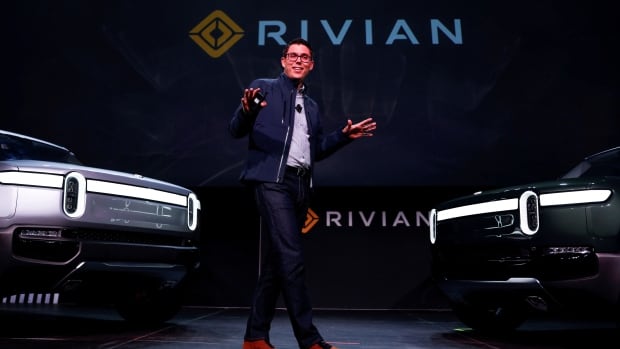 Rivian Automotive, a company that has delivered around 150 electric pickups mostly to employees, overtook General Motors as the second-largest U.S. automaker by value on Thursday.

The Californian company went public on Wednesday in an IPO that valued the shares at $ 78 each. By the end of its first day as a corporation, those shares were worth more than $ 100, enough to value the company at $ 88 billion. It’s more than Ford is.

Shares were up another 30% on Thursday, to propel the company above the US valuation of $ 100 billion. This is larger than GM of Detroit, one of the largest auto makers in the world, which sold more than 6.8 million vehicles globally last year.

Rivian’s IPO is the largest in the world this year and the largest for a US company since Facebook, according to data compiled by Bloomberg. But despite the high ratings and ambitions, the company is tiny. The goal is to produce 1,000 electric vehicles this year. The company launched its first vehicle, the R1T electric truck, in September and plans to launch its electric SUV, the R1S, next month.

Although the company has yet to record any revenue from vehicle sales, regulatory documents suggest it has already registered 55,400 orders for its vehicles.

Ford is one of Rivian’s high-profile supporters, having invested half a billion dollars in the company in 2019. The other is Amazon, which held a 20% stake in Rivian prior to the initial public offering. Amazon is not only a supporter of the company, but is also poised to be its largest customer as well, as the e-commerce giant wants to use Rivian vehicles for use in its delivery fleet.

Rather than focusing on the number of vehicles sold, investors envision vast potential for Rivian with a growing appetite for electric vehicles.

While a $ 100 billion valuation is no small feat, it still pales in comparison to that of Tesla, the electric vehicle maker it is most often compared to, which is currently worth more than $ 1 trillion. Tesla has so far sold approximately 627,300 vehicles this year.

Some in the investment community say that just like Tesla’s rally to become the world’s most valuable auto company, Rivian’s value is also a sign that valuations have gotten out of hand.

“Despite the popularity of the electric vehicle market and the huge gains in Tesla stock, we believe investors should avoid the temptation to buy Rivian stock,” said the company’s investment research firm New Constructs prior to the IPO.

The company notes that when Tesla went public in 2010, it was valued at US $ 1.7 billion, and at least it was already delivering vehicles to paying customers, and was on track to sell 1,500 that first year. That’s more than Rivian says it will do, despite now being worth about 50 times what Tesla was worth back then.

“Buying the stock at such a high price before the company has proven it can consistently produce more than a handful of cars seems ridiculous to us,” New Constructs said. “Investors shouldn’t buy a stock just because it’s in a hot sector.”

Tesla has amassed a market value of over $ 1 trillion. So far this year it has sold around 627,300 vehicles.

Tesla CEO Elon Musk was in the news this week for selling a huge stake in his company based on the results of a Twitter survey, and so because he may have to pay a large tax next year.