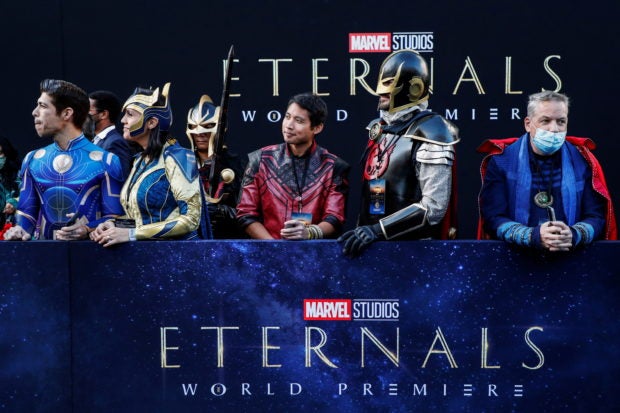 LOS ANGELES – “Eternals” has jumped to the top of the weekend box office charts, driven by a craze for all things Marvel. But his $ 71 million debut was just below projections, which were set at $ 75 million.

This is perhaps a sign that the uncertain reviews have dampened the results of “Eternals” or a signal that the underlying intellectual property, the story of a group of divinity-like extraterrestrials, has not had the resonance of other comic book adaptations, Variety reported.

Marvel has successfully introduced lesser-known heroes, such as the Guardians of the Galaxy, to movie fans and spawned blockbuster franchises with them, but that series garnered critical support and even debuted at a time before anyone ever had. heard of COVID. Hence, a very different world order.

“Eternals” still managed to score the fourth best opening weekend for any film during the pandemic era, slipping behind Marvel’s “Black Widow” ($ 80.3 million) and “Shang-Chi and the Legend of the Ten Rings. “($ 75.3 million) and” Venom: Let There Be Carnage “($ 90 million), made by Sony but based on a Marvel comic creation. That’s a staggering number and any other studio or film would be thrilled to have a launch of that size, but for a Marvel venture it’s hard not to see it fall short of skyrocketing expectations. Heavy head wearing the box office crown and all. Internationally, “Eternals” grossed $ 90.7 million, bringing its global tally to $ 161.7 million.

“Eternals” is directed by Chloe Zhao, fresh off Oscar-winning “Nomadland,” but reviewers have complained that the film is long on display and light on entertainment. It has the ignominious distinction of being the only Marvel movie to have earned a “rotten” rating on Rotten Tomatoes, with only 49% of reviews marked positive. Audiences were also lukewarm about what Zhao prepared, giving the film a so-so “B” CinemaScore.

“Dune,” the Warner Bros. and Legendary adaptation of Frank Herbert’s science fiction novel, finished second with $ 7.6 million, pushing its national revenue to $ 83.9 million. A sequel to the film officially got the go-ahead a few days after the theatrical release of the first chapter of Dune-verse. Denis Villeneuve heads a cast that includes Timothee Chalamet, Oscar Isaac, Javier Bardem, Zendaya and Rebecca Ferguson.

MGM and United Artist Releasing’s “No Time to Die” took third place with $ 6.2 million, which pushes the spy movie total to $ 143.1 million. The film, which marks Daniel Craig’s final release as 007, will be available for rental on digital platforms next week, just 31 days after its theatrical release.

Sony’s “Venom: Let There Be Carnage” took fourth place on the charts, with $ 4.5 million. The symbiote sequel earned $ 197 million in the United States.

Playfulness and multiversal possibilities filmed in “What If …?” of Marvel.