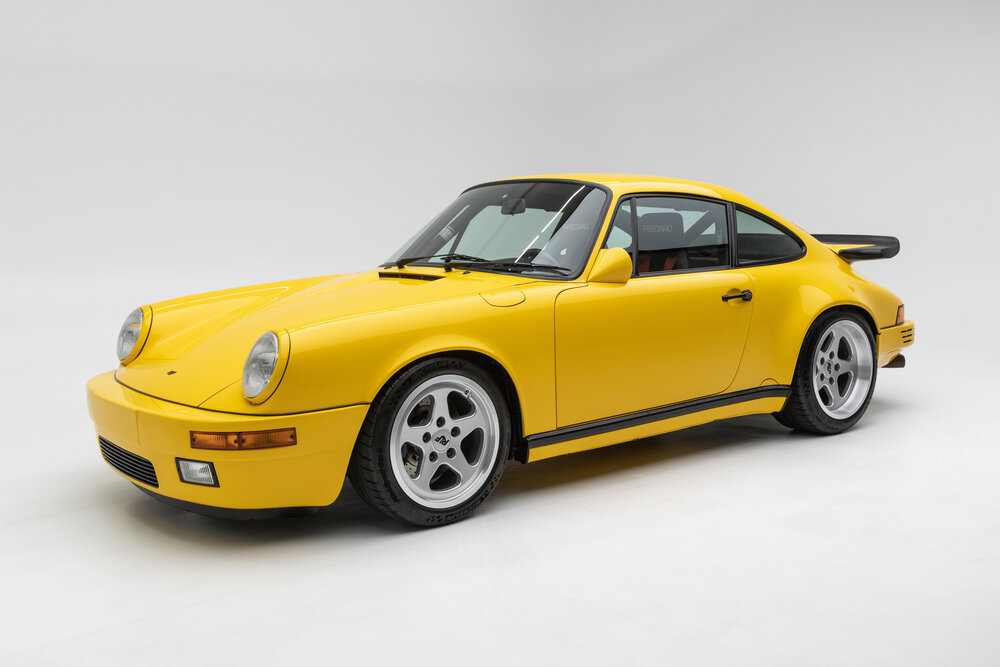 The RUF CTR helped put RUF on the map as the star of the famous film “Faszination on the Nürburgring” and as the winner of the Road & Track’s World’s Fastest Car competition in 1987. That year, the little yellow RUF beat the best of Ferrari, Lamborghini and Mercedes with a top speed of 213 mph, earning the nickname “Yellowbird” from one of the photographers at the event. The car you see here was sold new in Japan before being bought by the current owner just a few years ago. It remains one of the most original of the 29 RUF Yellowbirds in existence and is one of only nine originally painted in yellow.

The RUF Ultimate is the modern and reinvented version of the “Yellowbird” CTR. Using the same philosophy as the original, RUF has brought the Yellowbird’s materials and technology into the 21st century with weight-saving measures such as a carbon fiber body and a more powerful engine that produces around 100 more horsepower than the original CTR. The maximum has also arrived in rear or all-wheel drive, the latter capable of a time of 0-100 km / h of less than 3.0 seconds.

Only nine examples of the RT12R were produced and it remains one of the brand’s most powerful and fastest models to date. Based on the 997, the RT12R tops 230 mph thanks to its 730 horsepower Mezger-based flat-six. At the time of its release at the 2011 Geneva International Motor Show, the RT12R rivaled nearly all supercars currently in production. It remains one of RUF’s great engineering firms to this day.

This is one of only seven RUF Turbo R Limited examples in the world. Based on a white-bodied car supplied by Porsche, the Turbo R Limited produces just over 620 horsepower from a six-cylinder boxer engine developed and manufactured by RUF. The car seen here was also presented at Luftgekühlt 6.

Released in 1998, the RUF Turbo R was the last iteration of the air-cooled RUF sports cars prior to the introduction of the water-cooled models in 1999. The Turbo R replaced the discontinued CTR 2 and realized the full potential of the Mezger 3.6-liter six-cylinder engine. In RUF trim, the turbocharged powerplant produced 490 horsepower and 480 pounds of torque, with the power going to all four wheels via a RUF-designed six-speed manual gearbox. This is the only Cabriolet version of the Turbo R built.

This RUF RCT EVO widebody is finished in a unique custom metallic brown on a vibrant blue interior. The flat-six turbocharger produces a respectable 425 horsepower, propelling the car to a top speed of just 199 mph The RCT is the workhorse of the RUF range – highly usable with ample performance and a classic, charming style.

With each evolution of the CTR car series, RUF has become more ambitious and the CTR3 is no different. With the exception of the front, the entire car was designed, engineered and manufactured by RUF. The CTR3 was equipped with either a sequential manual gearbox or a dual-clutch steering wheel gearbox, but the owner of this unique CTR3 paid for the engineering and development of a five-speed manual gearbox, one of two with this feature.

The RUF RCT EVO is the brand’s approach to the varied world of restomods. The model is infinitely customizable, including wide and narrow body configurations. This car is a narrow body version finished with a gray on green interior. It was first presented at the 2015 Geneva International Motor Show before being brought to the United States