For the first time on record, US renewables generated more electricity than coal or nuclear power in 2020
Advertisement 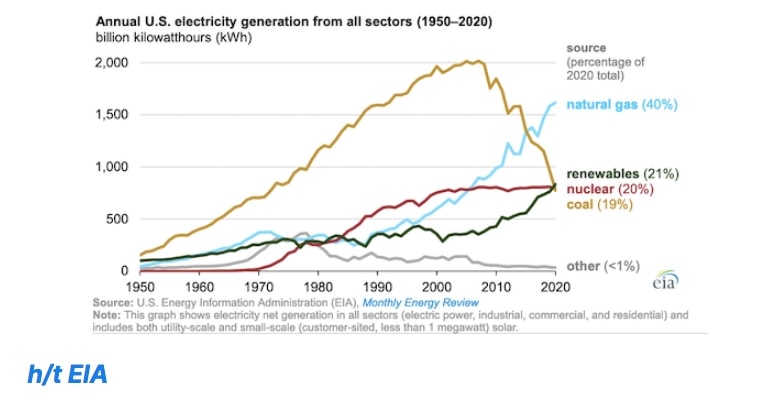 Here’s some good news about non-nuclear and carbon-free power generation, it’s growing dramatically and solar, wind, and hydro power are now the second-largest power source in the entire nation. We are still far behind China, but despite the corrupt politicians of both parties who owe allegiance to carbon energy and who try to block the development of non-carbon energy, we are still making progress coming out of the energy age of the carbon.

The Energy Information Administration, The federal government’s leading authority on energy figures, concludes that renewables, primarily hydro, wind and solar, increased to 21% of electricity generation in the US in 2020.

This is the first time that renewables have been the second largest generator of electricity in the US on record.

Renewables overall increased 9% between 2019 and 2020. About half of America’s clean energy now comes from solar and wind power, and the other half from hydropower.

Solar power soared even further, with utility-scale solar projects of 1 megawatt or more growing by 26%.

Small-scale solar energy, such as rooftop installations like the one we have increased by 19%.

The Clean Energy Association says the United States installed 26 gigawatts of renewable power plants in 2020, 80% more than in 2019, bringing the total US renewable energy capacity to 170 gigawatts.

In the US, about 78% of all new Electricity generation came from wind and solar power, which are clearly the future of the American grid.

US renewables outpaced coal, now just 19%, and nuclear, 20%. Coal is dirty and expensive, and coal-fired power plants have been replaced en masse by wind farms …

‘Actually, not so’: Pelosi’s Freudian slip on CDC power is shot down. But not before REVEALING how Democrats ‘THINK’

The Pelosi-McCarthy relationship is really bad