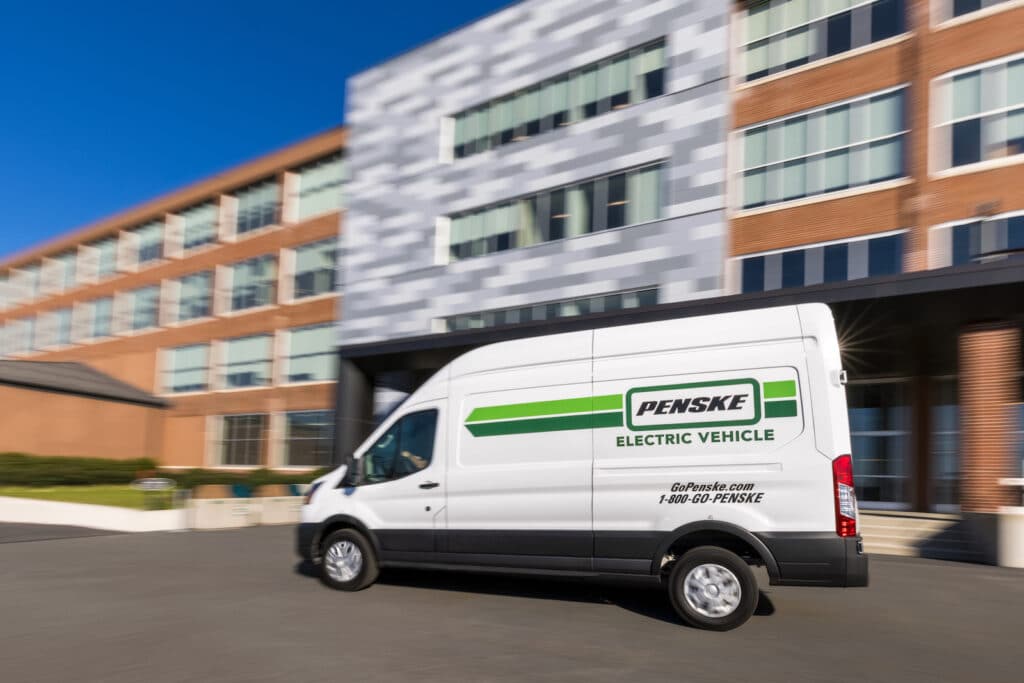 Ford is putting pre-production versions of its fully electric Transit vans in the hands of Penske Truck Leasing and National Grid.

The program is clearly an opportunity for the automaker to showcase some of its electric vehicles, which are apparently helping to raise the company’s share price to levels not seen in years, as well as becoming an increasingly large share of its sales.

Pre-production testing is handled by Ford Pro, the new commercial vehicle subsidiary the automaker created to emphasize its business.

The test comes as Ford and General Motors through its new BrightDrop unit, which CEO Mary Barra told analysts recently is very promising, are at the start of fierce competition. BrightDrop officials say it already has major contracts deliver its electric vans to major carriers like Federal Express as early as next year.

They are not alone in the segment either because Rivian, which launched its IPO today, is in final stages of testing your battery electric van it developed in partnership with Amazon, one of its largest investors. The internet retail giant has already ordered 100,000 vans. So Ford is an investor in Rivian.

Meanwhile, Ford plans to leverage its access to a broad portfolio of small, medium and large businesses to sell the services and subscriptions offered by Ford Pro, which is now the engine of the company’s efforts to increase revenue from the businesses. commercial, which is already one of the most successful companies in the automotive sector.

Ford Pro goes ahead with the plans

Ford Pro will use data from pre-production E-Transit vans used in the program by Penske Truck Leasing and National Grid to help with implementation in their operations when the vehicles arrive at dealerships across the country early next year.

Cannis previously said the support system, including data analysis, is part of the expanded menu of services that Ford Pro expects to offer its customers in the future not only with the electric van, but through the entire vehicle portfolio that the company offers to customers.

Ford Pro Charging intends to offer end-to-end tools to enable home, public and warehouse charging tailored to the operational needs of the fleet. Employee home charging will include available hardware and software solutions to manage overnight charging along with access to energy reports to make driver reimbursement easy.

Penske plans to evaluate and validate the E-Transit van’s capabilities, driving experience and charging strategy for specific applications, including rentals to small and medium-sized commercial businesses.

“We are thrilled to partner with Ford Pro on the introduction and real-world testing of these new electric vehicles as the first truck rental and leasing company to do so,” said Art Vallely, president of Penske Truck Leasing. “We expect to see strong use and interest from customers making last-mile deliveries, regional deliveries, and ultimately consumer use for small home commutes.”

As part of the pilot program, Penske has deployed an E-Transit van in the Reading, Pennsylvania area. Penske’s long-term electric vehicle plans include adding electric vans across its wider network, including Southern California.