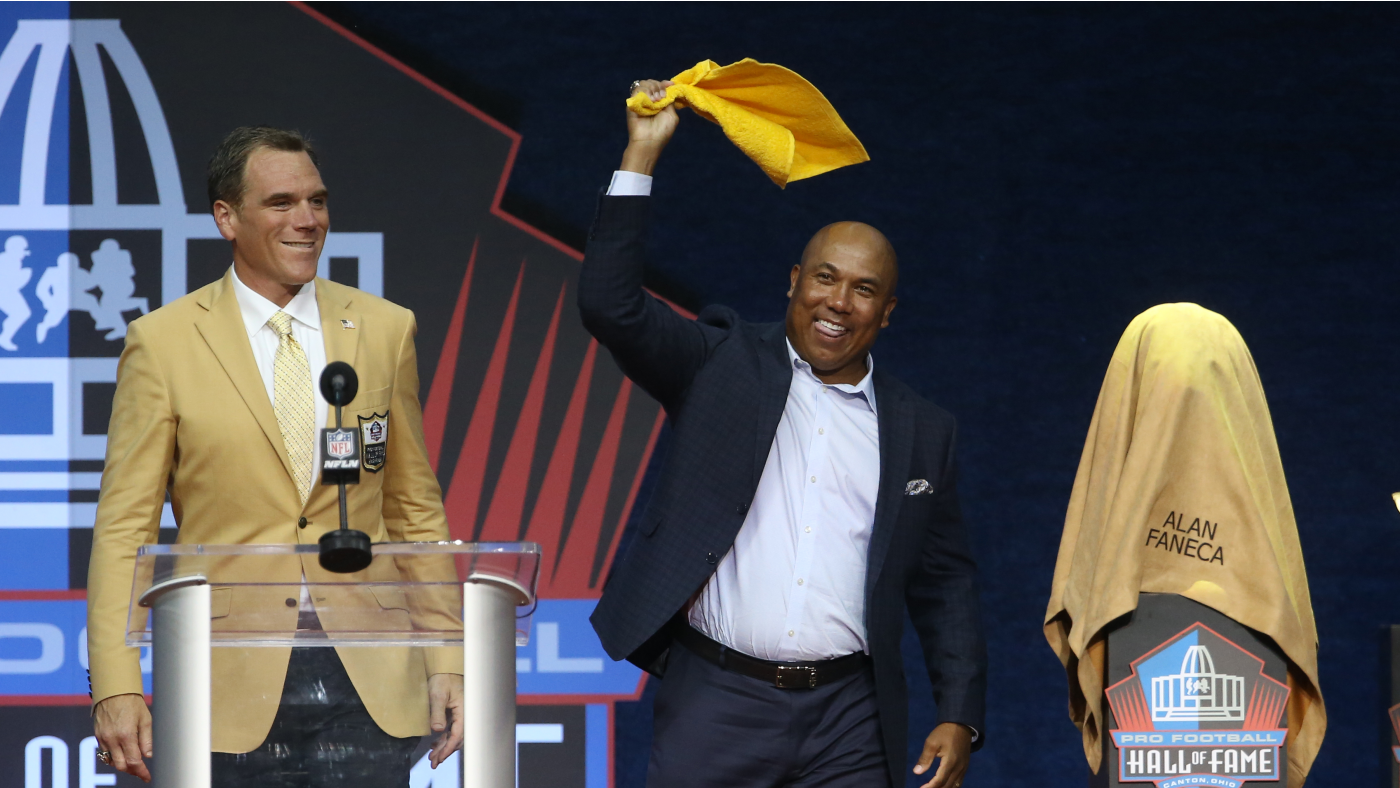 Hines Ward is quick to recall a 2008 game between the Steelers and Texans, a game in which the former Steelers wide receiver caught two early touchdowns as Pittsburgh won in a blowout.

While the Steelers spent most of the second half running the ball and protecting their big lead, the Texans aired it out while utilizing the talents of their No. 1 wide receiver, Andre Johnson. The Steelers ultimately won the game, but Johnson finished with more eye-popping numbers. It’s just one example of Ward winning the game but, based on circumstances beyond his control, not putting up bigger numbers than one of his teammates.

That’s one of the reasons Ward feels he’s not currently in the Pro Football Hall of Fame despite being a semifinalist in each of the last six years. While he twice achieved the team’s ultimate goal of winning a Super Bowl, a specific individual accolade may be what has prevented Ward from receiving the highest individual honor a professional football player can receive.

“The feedback, or what I’ve been hearing, is, ‘Well, you’re (were not) an All-Pro,'” Ward said during a recent interview with CBS Sports. “Well, I wasn’t in an offense to be an All-Pro. We had All-Pro offensive linemen and All-Pro running backs because that was our offense.”

Ward spent most of his 14-year career playing in a first-run offense. Instead of going deep and racking up big stats, Ward was doing the landlord’s job of catching passes up the middle and making screens to help open up running room for Jerome Bettis and Willie Parker.

When asked to make plays in the passing game, Ward almost always delivered. With the running game neutralized, Ward made two of the biggest plays in Super Bowl XL, including the game-winning touchdown catch that led to him earning game MVP honors. Ward made several other big catches at pivotal moments during his career as he helped the Steelers return to the top echelon of the NFL.

“I look at what I did in the 2000s,” Ward said. “Go to three Super Bowls, win two. I was as intricate a part of that team as anyone in our organization. But as my mom always told me, only control what you can control. I can’t control (Hall of Fame ), so just having my name mentioned among some of the greats who once wore the uniform, that’s a blessing in itself for me and that’s what I’m going to lean on, for now.”

Ward doesn’t necessarily agree with Pittsburgh coach Mike Tomlin’s sentiment that if the Steelers had beaten the Packers in Super Bowl XLV, I would already have a bronze bust and a gold jacket.

“I don’t think I should win three Super Bowls,” Ward said. “Most people don’t have one and they’re in the Hall, so you’re saying I have to climb the mountain to win three just to get an offer? For some reason, it is what it is.”

A third-round pick in the 1998 NFL Draft, Ward initially made a name for himself in the NFL as a standout on special teams. He earned a starting job in 1999 despite Pittsburgh drafting wide receiver Troy Edwards in the first round during the offseason. Once in the starting lineup, Ward quickly added to his reputation as a tough player who encompassed all aspects of being a football player.

Ward began receiving praise around the league for the work he was doing in 2001. He was named to his first of four consecutive Pro Bowls while helping the Steelers to the AFC Championship Game. Ward’s success that season was significant given the fact that Pittsburgh lost Bettis late in the regular season after the future Hall of Famer suffered an injury.

Ward had his best statistical season a year later despite the Steelers changing quarterbacks. Pittsburgh moved from Kordell Stewart to Tommy Maddox, who prior to that season hadn’t started an NFL game since 1992 and had yet to earn a regular-season start. Ward had another breakout year in 2003 before posting his fourth straight 1,000-yard season with a rookie quarterback at center: Ben Roethlisberger. Ward was in his seventh season, and had already earned three Pro Bowl nominations, when Big Ben began his Hall of Fame career with the Steelers.

Ward played in an era with some of the most prolific and notable receivers in history, a group that includes Moss, Andre Johnson, Calvin Johnson, Chad Johnson, Marvin Harrison, Terrell Owens, Torry Holt, Reggie Wayne and Steve Smith Sr. , among others. Unlike Ward, many of those players were the focal points of passing violations first. Calvin Johnson, Moss, Harrison and Owens earned a combined 15 All-Pro nominations and are in the Hall of Fame. By contrast, Holt, Smith, Ward, Wayne, Chad Johnson and Andre Johnson received a combined eight All-Pro nominations and are not in the Hall despite having similar numbers and, in the case of Holt, Ward and Wayne, being a integral part. Part of champion teams.

“For me, I don’t know what happens in All-Pro,” Ward said. “One, when you’re not in an offense that’s designed to help you be an All-Pro wide receiver. And two, when you have Randy Moss, Marvin Harrison, year after year, racking up outstanding stats. But that shouldn’t rain on my parade.” I look at the guys that are on that list, and I feel like I should be in the mix with all those guys… For the people, so sit there and say, ‘Well, he doesn’t have All-Pro,’ I just laugh and laugh because to me, that doesn’t make sense.”

Check the acceptance box to confirm that you want to subscribe.

There was an error processing your subscription.

As it currently stands, Ward remains the standard when it comes to Steelers wide receivers. He remains atop the team’s career record books in receptions, receiving yards, and touchdown receptions. Ward joined several of his former teammates in the Steelers Hall of Honor in 2019.

“Considering the game is on now,” Ward said with a smile. “I think all records are made to be broken by these elite big receivers. Seeing my name still at the top of the list in passing, receiving categories is a blessing for me, considering all the great players. Lynn Swann, John Stallworth, Antonio Brown, all the guys I played with and then the group of young guys, Diontae (Johnson) and Chase (Claypool) and (George) Pickens. I mean, these guys are pretty good.

“A lot of talent has come through that organization. So to sit at the top, I’m grateful, but all records are made to be broken. Now, you’ve got all 17 games in an aerial league, so who knows if it stands.” .But at the end of the day, I think being at the top speaks to longevity and productivity year after year and playing my entire career for a great organization like Pittsburgh… Even though I’m not in the Hall, but just being mentioned among one of the best ever dressed in the black and gold uniform is a blessing to me. I’m very grateful for that”.

Ward currently serves as an ambassador for the Huddle Up Campaign: Let’s Talk About Obesity from the NFL Alumni Association, which aims to encourage men to talk about excess weight and associated health. Ward hopes his own weight loss journey can help inspire other men to pursue a healthier, more active lifestyle. Ward said a visit to the doctor inspired his lifestyle changes.

“I tried to be active as a player,” Ward said. “Then I did ‘Dancing With the Stars’ and I did an Ironman. It wasn’t until I started training, you’re sitting at the desk all day, eating and watching movies. And then you get to COVID, when you’re not training, sitting watching a lot of television… As a retired player, you get older, your metabolism starts to fail, you can’t sit down and eat everything you want to eat.

“I still have a long way to go, but it’s trying to figure out my habits and lifestyle. Sleeping, not eating a whole bag of Cheetos (laughs)… For me, it was a lifestyle decision. I wanted to live longer.” and I wanted to be healthier… Just to spread the word, talking about my past history, if I can impact a person to help get off the couch and help go to the doctor, get a checkup, help invest in their time, That’s the whole premise of why I wanted to be a part of this whole campaign, because I think it’s important.”

Ward said some of his former teammates have started a friendly bet within their group chat based on who has lost the most weight in retirement. Having a support system, Ward said, is key to living a healthier, more balanced life.

“I have a great group of teammates. No matter what we do in life, we’re just competitors,” Ward said. “It just gives me extra motivation to stay on top of my game when I’m competing with my teammates when it comes to losing weight and getting back in shape.”

kthe view is not exactly a household name, even by the low-key standards of corporate Japan. Ask most people, including some professional market...
Read more

HOBART, Australia (AP) — Some 230 whales have been stranded off the west coast of Tasmania, just days after 14 sperm whales were found...
Read more