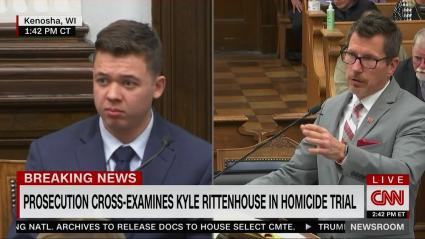 During today’s Rittenhouse trial, Kyle finally took the floor and Fox News clearly had a pro-Kyle agenda as their graphics department went into overdrive playing videos of the protests in which he killed two people.

When the prosecution finally started asking questions, they put up a photo of Rittenhouse’s TikTok page which alone is damn hell.

Its handle is: 4portsmore whores

This is misogynistic at its core.

But what also stood out was the graphics of him holding his AR with the caption “Bruh, I’m just trying to be famous”

The TikTok page appeared briefly on Fox News, but was then immediately replaced by an old video of the protests in Kenosha that went violent, so Fox News viewers didn’t get the full effect of his terrible and damaging TikTok page.

It was left to the prosecutor to draw what his page said by asking questions of their audience.

Well, now we know that Kyle “tries to be famous” has become just that. Famous and supported by the right-wing media.

During Kyle’s testimony, Fox New purposely continued to reproduce the protests at Kenosha in a split screen that appears to be in an effort to help support his innocence.

On CNN they used a split screen to keep it honest.