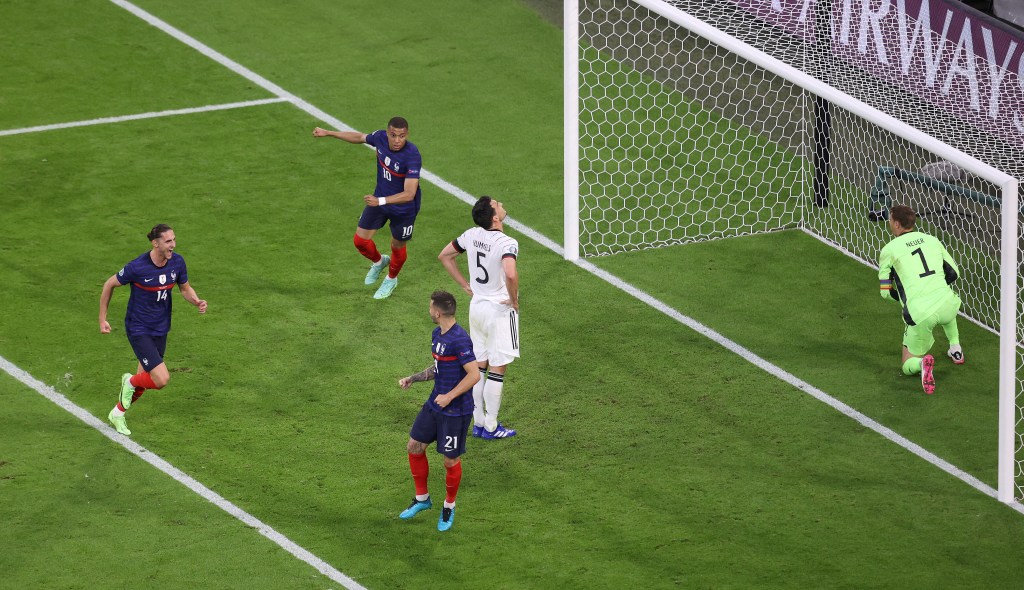 Over 15 million viewers watched reigning World Cup champions France beat Germany at France’s M6 on Tuesday night in the first major showdown of Euro 2020, which runs through July 11. and will be played in various venues in Europe and the UK. That was good for a 57.5 turnout from 9PM local and included a peak of 17.4M viewers (for comparison, 12.6M watched France enter the World Cup in 2018, giving TF1 a turnout. 69 on a Saturday afternoon). Tuesday’s game drew the highest television ratings since 2018, M6 said. These figures do not take into account projections in public places, and there was a large following in bars, restaurants and fan zones.

France currently has a curfew at 11pm, so those revelers had to rush home after the game. However, the French Interior Ministry, Gérald Darmanin, had issued a directive to the nation’s security forces on Monday to “show special leniency” during checks on people returning home. The ministry also said there would be no exemption for curfew during the games in France. This will no longer be a problem as of June 30, when the curfew is lifted.

Christian Eriksen publishes a photo, thank you note and urges the team for the next game: “Play all over Denmark” – Update

In Germany, 22.55 million viewers watched the first half of the match on ZDF, local media reported. That was good for a 67.4 turnout, which fell to 63 during the second half.

France won the match with an own goal from the team‘s Mats Hummels during the first half. Les Bleus He later crossed two, but goals from Kylian Mbappé and Karim Benzema were ruled out for offside.

Some 2,500 French fans traveled to the Allianz Arena in Munich to attend the match, which received a total of 14,500 spectators, given health restrictions. That’s the lowest number of tournament goers expected to see at all times.

Along with the mini controversy surrounding whether the German Antonio Rüdiger bit Frenchman Paul Pogba on the shoulder (the jury is still out, but the players hugged after the match), there was some great drama on the field before the start. A protester parachuted into the arena, hitting the camera cables and causing debris to fall onto the field in the main stand and narrowly missing French coach Didier Deschamps.

UEFA called the move “reckless and dangerous” and said several injured people were being treated at the hospital. Authorities are investigating the incident that was instigated by a Greenpeace militant. The parachute said “Kick Out Oil!” and appears to have been directed to the sponsor of the Volkswagen tournament. The director of Greenpeace France apologized to “people who were injured, people who may have been scared and to Didier Deschamps”, on FranceInfo this morning.

Also in Germany, the first match of the day between Hungary and reigning Euro champions Portugal (which the latter won 3-0) was watched by 6.44 million people (34.4 shares). Both teams are also in Group F with Germany and France.

In the UK, ITV’s coverage of France vs Germany garnered a crowd of 6.6 million over the course of a three-hour broadcast. The main match reached a five-minute peak of 9.4 million viewers in the second half, according to BARB figures provided by overnights.tv, as the champions narrowly edged a win.

At the beginning of the tournament, England began their campaign against Croatia in a small capacity Wembley Stadium. Under the bright sunshine of a nice British summer day, England ran out of winners 1-0, with 7.6 million people watching BBC One coverage. Ratings rose to a five-minute peak of 11.6M in agony. end of the game, which turned out to be a fairly comfortable victory for the hosts.

All eyes in England are now on Friday, when Gareth Southgate’s men take on Scotland in a mouth watering derby of home nations. The game kicks off at 8pm local time at Wembley and is sure to attract the biggest UK TV audience of the tournament yet.