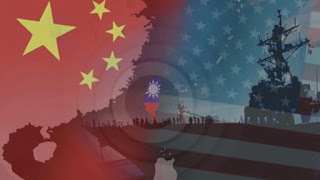 It may be that US and Taiwanese officials know without a doubt in their minds that time is running out for them regarding China’s ambitions for Taiwan and are currently trying to “carry forward” at least the perception among the international community that China is a aggressor and therefore unreliable as a commercial ally.

Of course, the possibility of life being lost in Taiwan is not taken lightly, however it can also be admitted that China is nearing a point where it will perform by causing casualties for the same reasons outlined in the previous paragraph.

A Taiwan official said China will be fully capable of taking Taiwan by force by 2025. This assumes that China has already firmly established itself as a trusted trading ally by far more nations than it does now through its Belt and Road Initiative. . At this point, China is far less likely to be somehow severely affected by the political and economic consequences of the attacks and invasion of Taiwan.

Until China achieves such a position, it remains vulnerable to a reputation downgrade that could seriously affect its plans towards the BRI. The coordinated plan between the US and the current authorities on Taiwan could be to push China to play its game too soon and thereby bring it into disrepute and thereby thwart its plans regarding its BRI.

This should be seen in the context of ‘The Great Game’, or rather these days, ‘The Global Game’. The elites of the most powerful nations on our planet are in existential conflict on two totally different visions. While it is clear that there will never be and indeed never has been any prospect of a utopian dream for humanity, that does not prevent either party in this conflict from believing with what appears to be absolute certainty that their vision MUST prevail. That side is obviously led by the US with the UK and all the so-called liberal democracies backing it up with what in some cases appears to be an absolute belief. This support comes from the political elites of these nations to many others, such as that within their main news entities, two of the most powerful being CNN and the BBC.

All the elites of the so-called Western liberal democracies are fully involved in the war being fought against those nations deemed to be outside the canon of beliefs of the self-styled righteous warriors who seek to spread their utopian dream all over the world.

Taiwan is simply one more weapon to use against those the West seeks to eliminate altogether. Meanwhile, before the complete subversion of all systems considered to be beyond the limit, the West maintains an extremely moderate and temporary claim to acceptance. However, this fiction will become increasingly difficult to maintain as circumstances change in favor of those it wishes to destroy. As China and Russia grow, so too will the extent and power their enemies use against them. This is already becoming quite obvious and Taiwan is just the latest example of the escalation that we can expect to grow to ever greater levels as time goes on.

In the meantime, of course, the whole of humanity faces existential threats that require an extremely high degree of unanimity across international borders to be effectively mitigated. This creates a global melting pot of inevitable pain, trauma, anxiety, and a host of other extremely negative effects such as increased depression and suicide levels.

As humanity suffers from growing paroxysms of negativity, the elites who promote ever-worsening conditions will be locked out completely out of those conditions, totally fixated on the war they have waged for most of their adult lives.

Taiwan, Ukraine, Hong Kong, Tibet, Xinjiang, Iraq, Syria and previously Afghanistan and Libya are pawns in a “game” that essentially has no place in the war for domination that is ruthlessly and irresponsibly waged by the West . They are collateral damage for which there is no real concern from the US, UK, EU or others. They are more chess pieces and tools to use against their opponents in the most ruthless and callous of all possible games, The Global Game for Western World Domination.