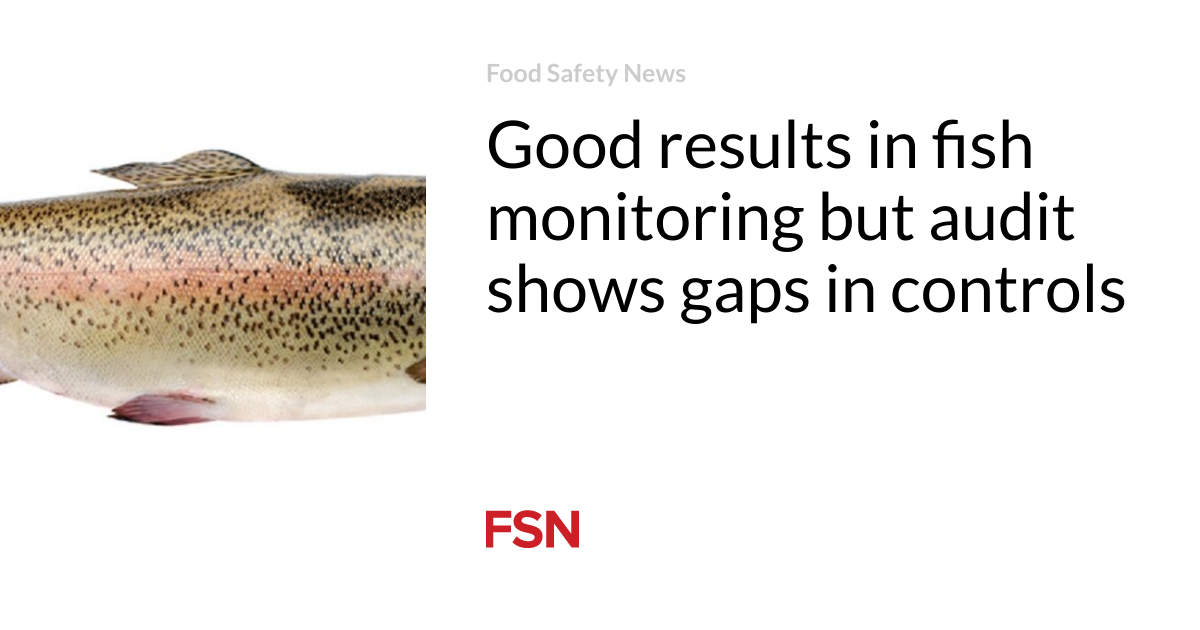 Monitoring of farmed fish in Norway has revealed low levels of pharmaceuticals and environmental toxins and an audit has found that the fish control system could be improved.

Inspectors from the Norwegian Food Safety Authority (Mattilsynet) collected fish tested for illegal compounds at the farm level without prior notification.

Samples examined for illegal compounds were collected at all stages of cultivation. Those tested for contaminants and approved veterinary drugs came from processing plants and represent farmed fish ready for human consumption.

No residues of stilbenes, steroids, chloramphenicol, nitrofurans, or metronidazole were found in any sample. Residues of malachite green or brilliant green were also not detected. Residues of the crystal violet dye were detected in two salmon samples, but this was likely caused by contamination during sampling, according to a follow-up investigation.

Dioxin levels found in fish fillets were lower than the previous year. No residues of veterinary drugs were found and for contaminants, none of the samples exceeded the maximum limits of the EU, where such levels have been established, such as mercury, lead and cadmium.

EFTA audit findings
Meanwhile, an audit by the EFTA Surveillance Authority (ESA) has uncovered problems with the frequency of official controls of fishery products and the approval of establishments in Norway. Nine recommendations were made.

The evaluation in March of this year found that the official control system is based on risk and covers the production of fishery products from capture to consumer. It included eight processing plants, a cold room, four landing sites, a fishing vessel and an official control laboratory.

The ESA is responsible for monitoring how Iceland and Norway implement the European Economic Area (EEA) rules on food safety, feed safety and animal health and welfare.

Norway is one of the largest producers of fish products in the world. The largest export markets are China and EU countries such as Denmark, Poland, Germany and the Netherlands.

From 2019 to 2021, there were 10 Rapid Alert System for Food and Feed (RASFF) reports on fishery products from Norway, including three for Listeria and Anisakis.

The auditors advised fish farmers to develop national guidelines on good hygiene practices and the application of HACCP principles. Mattilsynet is developing a plan to train food inspectors to audit HACCP systems.

Problems found by the auditors
The risk-based system is based on microbiological aspects and does not include chemicals. Some controls are affected by lack of resources. The auditors noted examples of insufficient communication and cooperation between headquarters and regional offices, which may have resulted in the marketing of non-compliant products.

Auditors found use of unprotected and damaged wood, pest control issues, poor storage conditions for fish products and animal by-products, and water on the floor, all of which can cause cross-contamination.

The audit team said the approval procedure is not always followed.

“There is a risk that establishments are not approved where required, approved establishments and vessels are carrying out operations for which they have not been approved, or operations are being carried out in facilities that do not meet the requirements of the legislation of EEA hygiene. This could lead to unsafe products being marketed.”

Mattilsynet said a risk-based plan for sampling, including histamine, would be developed and the lab situation would be resolved by 2023.

(For a free subscription to Food Safety News, Click here.)

The Supreme Court on Tuesday confirmed the authenticity of a leaked draft ruling on roe v. calf that would...
Read more

NEW YORK -- A biography of the late George Floyd and poetry by Pulitzer Prize winner Sharon Olds were among works included on Thursday's...
Read more