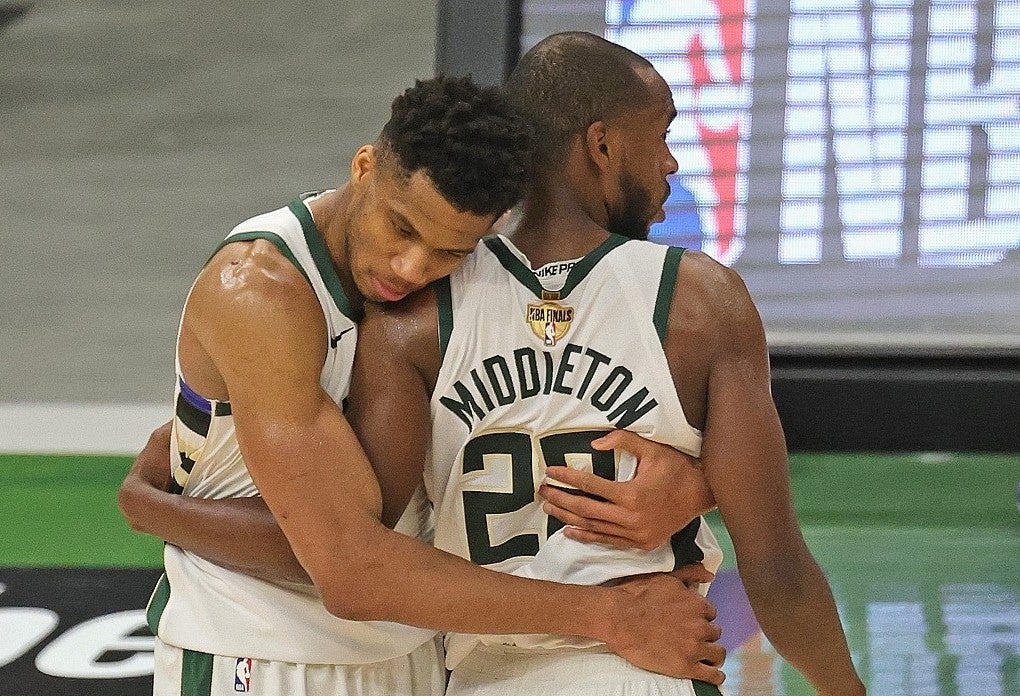 Giannis Antetokounmpo # 34 of the Milwaukee Bucks hugs Khris Middleton # 22 near the end of the game against the Phoenix Suns at the Fiserv Forum on July 14, 2021 in Milwaukee, Wisconsin. Jonathan Daniel / Getty Images / AFP

Giannis Antetokounmpo spoke more like a Greek philosopher than a Greek NBA star on Friday, but his wisdom about living in the moment could help the Milwaukee Bucks win the NBA Finals.

The Bucks rallied 2-0 against to tie the Phoenix Suns at 2-2 in the best-of-seven championship series entering Game 5 on Saturday at Phoenix.

Two-time NBA MVP Antetokounmpo, a 26-year-old forward, says Milwaukee was resilient by not thinking about defeat or reflecting on his fate, but by fighting one day and even one play at a time.

“I feel like once you are living in the present and enjoying the specific moment, you can enjoy that moment to the fullest,” said Antetokounmpo. “Once you start thinking about the future, what is going to happen, you are losing in the middle.”

Tempted by ego and pride, Antetokounmpo has chosen humility, his words are a modern version of wise advice that classical Greek philosophers such as Socrates, Plato or Aristotle could have offered.

“From my experience, when I think about things like, ‘Oh yeah, I did this, I’m so cool’… usually the next day you’re going to suck. Simple as that. The next few days are going to be terrible, “said Antetokounmpo.

“I discovered a mindset to have that when you focus on the past, that’s your ego. When I focus on the future, it is my pride. ‘Yeah next game, I do this and this, I’m going to dominate.’ That is your pride speaking.

“I try to focus on the moment, the present. That is humility. That is not setting expectations. That’s going out, enjoying the game, competing at a high level.

“That is like a skill. I tried to master it. It’s been working so far so I’m not going to stop. “

After two 40-point performances and a superb block on Phoenix’s Deandre Ayton, Antetokounmpo has a lot to be proud of, if he stopped at those things.

“I appreciate the moment. Big moment. We have to move on, ”said Antetokounmpo.

Antetokounmpo points out the difference between boastful thoughts about future games and setting goals with specific steps to take to achieve them.

“That is the goal. This is the plan. There are steps for it. You do little things. Being in the present allows you to do those things to get there, ”he said.

“If you try to jump (jump steps), you’re going to fall off the cliff.

“For me it is working. I am enjoying my life. I enjoy time with my family. It may not work for everyone. Some people may think differently.

“You have to invest in yourself. It will make you enjoy your life more. That is the goal, enjoy every moment you can. You will not be happy all the time, but it is to have joy “.

‘The ball gets heavy’

“The ball can get a little heavy.” – @ Giannis_An34 feeling the pressure of a tight ending.#NBAFinals presented by YouTube TV Media Availability

In the case of the Bucks, it has been knowing that they can bounce back from a 0-2 deficit, as they did by toppling Brooklyn in the second round and hope to do so against the Suns. Only four times in NBA Finals history has a team lost the first two games and then won the title.

“We work very hard throughout the year to develop winning habits,” said Antetopkounmpo. “We don’t worry about the result. We are only concerned with going out, making a lot of plays, competing as hard as we can, doing it together.

“We can know that when we are depressed, we still find ways to win games.”

Antetokounmpo doesn’t worry about finding a balance where he doesn’t cramp in the fourth quarter as he has at times in the final.

Noting the pressures of his first NBA Finals, Antetokounmpo said, “The ball can get a little heavy down the stretch,” but denied that everyone got too nervous.

“Oh hell no,” he said. “The ball gets heavy, but if you are only thinking about winning and not thinking about what is going to happen next. My mind is so busy with it that I don’t think about the pressure. “

Istanbul will host the final of the Champions 2023