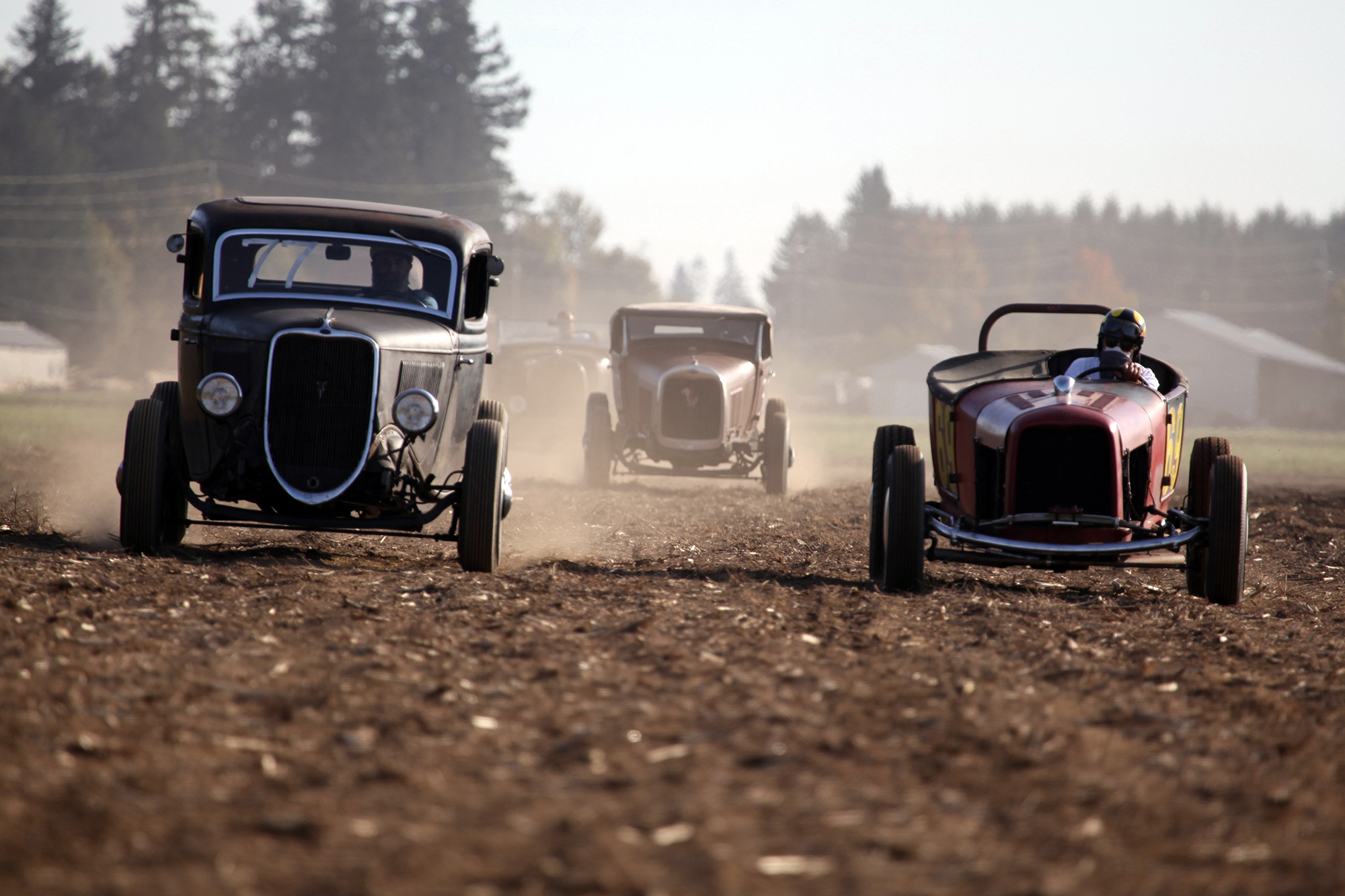 Last October, I was in a field in Oregon with a camera in my hand. The day was ending and I could tell that another cool Pacific Northwest night was coming soon. I was more than 600 miles from home and tried to forget the fact that I had 10 hours of driving to burn before I sat down at my desk for work on Monday morning. I was surrounded by a dozen first-class hot rods, who spent the afternoon racing head-to-head. These were real hot rods, driven by the men and women who built them. I was there, all there, and nothing could take me away.

That day, I made a promise to almost everyone who would listen to me. “Mark my words,” I said with unwavering authority, “I … want I’ll be back here next year with my car. “To my surprise, no one tried to dissuade me. I told them about my skeleton of a 1930 Ford roadster that I was mounting in my axle-filled garage in San Francisco. Instead, they listened, and then something unexpected happened: they offered me to run their cars.

Bangers on the head. Flat multi-carbide heads. Race cars survived. Chopped buds, rooster tails and the infamous “Dirty Bird”. My new group of friends threw me in the ring. They entrusted me with their cars. They spurred me to push them to the limit. “Floor!” “Do not worry. Move it like a Toyota! “” Give it hell! “I did just that.

It’s hard to overstate the impact Charlie and Kelli Hascall’s first trip to Harvest Drags had on me. There, in the Oregon wine region, my perception of hot rods changed forever. I have learned firsthand that these machines are tough. They are made to be guided; they are made to lift chunks of dirt off all four wheels and leave you covered in dirt from head to toe as you brush the mud off your teeth.

When night fell, I was exhausted in every sense of the word. I promised Charlie I’d see him next year … whatever happens.

There were never any questions as to whether I would be racing my roadster at the 2021 Harvest Drags. Even though I didn’t know how to fit a car, I knew I had to have it ready by October. So for the next 365 days, I worked to bring my Model A to life. (As much as I’d like to go into detail now, I’m saving those stories for a future article.)

When October came, I came up with a plan. Drag your car to the track, race all day, then drive approximately 50 miles to downtown Portland on winding back roads. After spending Sunday driving around town, I would drive back to my truck in McMinnville and drive home. It was a heavy plan for driving, especially for someone who has never towed a trailer for more than 20 miles Other he never drove their Model A outside of San Francisco. Being me, I wouldn’t have wavered.

Before I could finish explaining my idea, my friend Yama stopped me. “I’m in it,” he said. “Also, we can shoot an episode for the Mazi Moto YouTube channel. “That said, I got the car set up and started putting the pieces together.

U-transport. Oakland, California. Armed guards. Night driving. Escorts. Neon signs. The Hi-Lo Motel. Two in the morning reporters from the lobby. Onion and garlic season. Chopper. Craigslist. Truckers. Doja cat. The little moments and the big moments ticked like mile markers on Highway 5, glinting in the high beams. By Friday afternoon, the dust had subsided. We arrived in McMinnville, Oregon.

We were relieved, but also thrilled with everything the weekend had to offer. That night we stayed with our friend Noah Norwood, better known as The Hot Rod Kid. Longtime readers will remember I was on his HRK podcast in February. Seeing we were in the area, he came up with the idea of ​​recording an episode with me and Yama right there at his kitchen table.

Held by Little Caesars and Rainier beer, we had a nice conversation about hot rods, helicopters, road trips and my next project for the magazine, Slot Mag. If you are interested, you can listen to episode 13 in its entirety here.

As I fell asleep that night, my thoughts were spinning like dizziness. “How will it go tomorrow? Will I resist? More importantly, will the car make it? “

Saturday morning was cool and foggy in McMinnville. When Noah opened the shop doors, I couldn’t help but smile when I saw my car waiting for me. I warmed it up and backed it back into the fog. The crisp air reminded me of those morning trips to San Francisco’s Ocean Beach. Yama and I got on the roadster and headed for the dragons.

As I said before, this is my first time driving this car out of town. To be sure, I immediately felt at ease on the winding two-lane roads. Through the cut windshield, we saw barns, fields and leaves that changed from green to copper, from auburn to gold. We moved on, stretching the banger legs as we approached North Palm Speed. 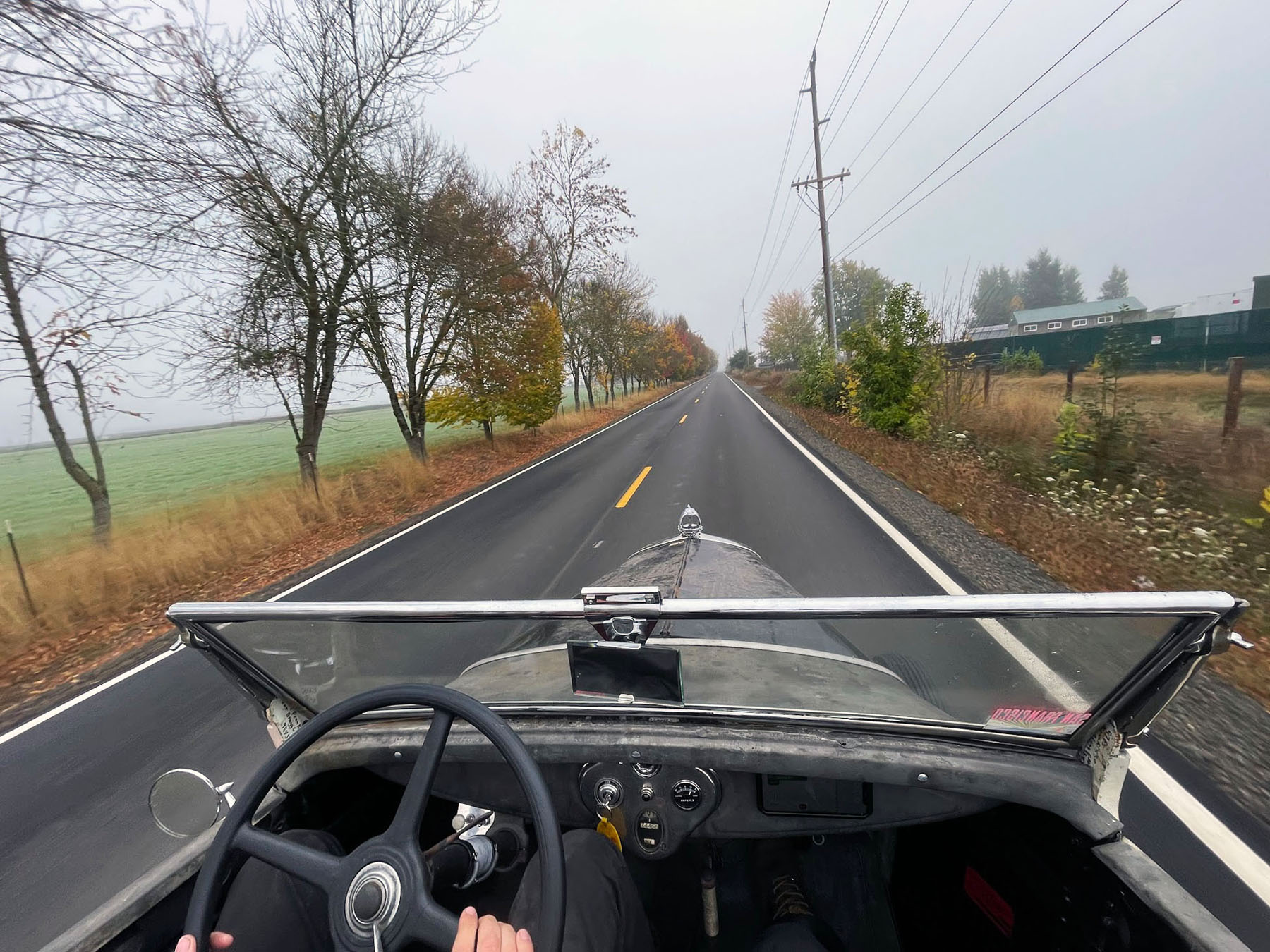 Driving to the property, I noticed Charlie instantly. “Charlie!” I shouted from the front seat, reaching out my hand. “I was going to say, I didn’t even recognize this roadster!” he said with a smile. We laughed. That’s right, we had arrived.

I felt goosebumps forming as I took my car out onto the field, placing it in line with 22 other prime Ford hot rods. From gow’s works to racing cars, from survivors to newly finished construction, it was one of the most impressive collections of vintage tin I’ve ever seen. Best of all? This was not a static display. Not from a long shot. Once the pumpkin patch dried, we were running. 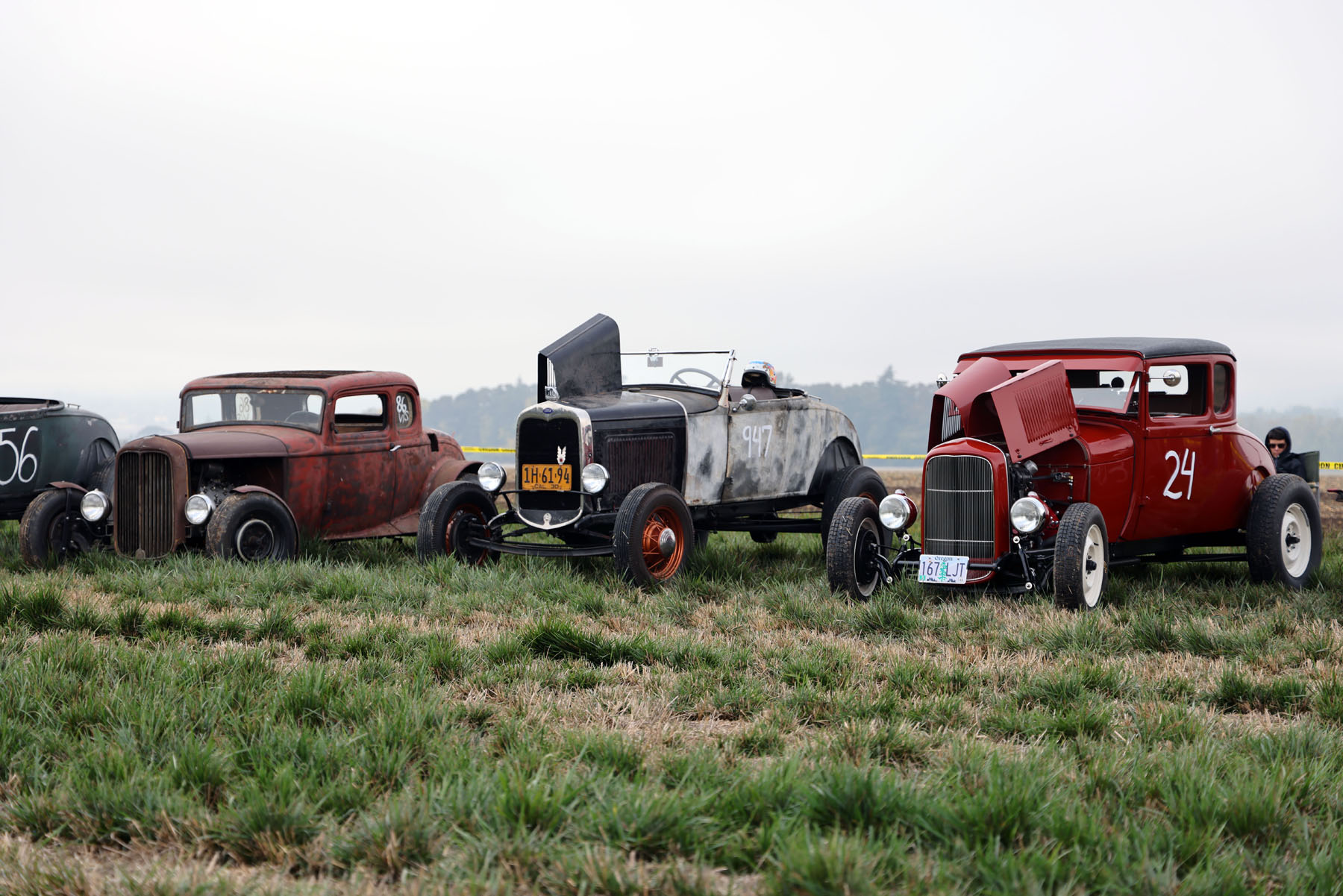 When that time came, I was having too much fun to worry about anything. I didn’t have to remind myself that this was what I had worked for. The whole thing was natural, fluid and absolutely pressure-free. When I buckled my helmet and buckled the seat belt on the plane, I was ready.

The starting line was marked with chalk. Both lanes were muddy, one slightly muddy than the other. I crept into Kelli. I looked at my opponent, then again at Kelli. Clutch engaged. Top flag. RPM up. Bottom flag. Off with the clutch. Foot down. Mud and pieces of pumpkin flying all over, splashing my windshield like an earthy Jackson Pollock. I fight to keep the car straight. i’m slipping. I’m laughing. I’m winning (?)

I spent that Saturday surrounded by some of my favorite people in the world. I did a lot of overtaking, winning some races and losing others. And when all was said and done, Yama and I said goodbye. We took our reliability to Portland and were hoping to be in town by sunset. According to my calculations, it was about 50 miles. Everyone wished us luck. That’s right, we were on our way.

Just before we started on Dayton’s winding two-lane roads, I stopped by to thank Charlie and Kelli. And when I did, I told them I’ll be back next year. This is a promise. 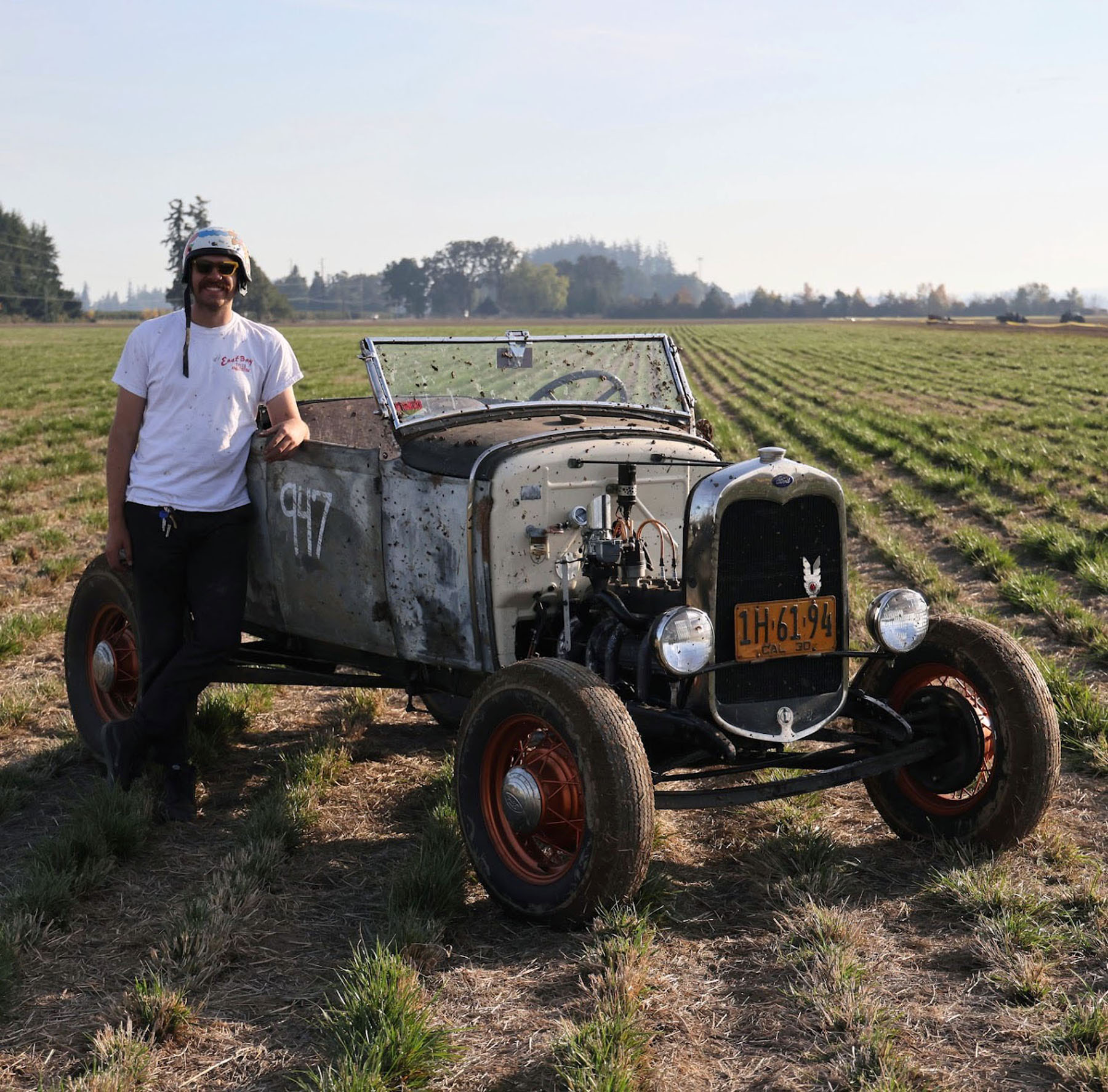 Yama made a nice video summary of our trip. Ryan beat me to post it, but I guess it’s worth discussing again. I’ve been involved in the world of hot rods for more than half of my life, but I can confidently say this is the most fun I’ve ever had with old cars. Point.

I would also like to note that for the first time ever I took a total of maybe seven photos. Luckily for me, Yama was there with all the photographic equipment. Most of the photos you see here are his. Talk about a great friend!

There are many thanks in order. Special thanks to Jeff Ediger for letting us rip your noggin with our cars. I’m asking for a rematch with your roadster next year, so consider yourself forewarned.

Thanks to Charlie and Kelli of North Palm Speed ​​for envisioning such an amazing event and a big thank you to Yama for coming. Oh, and thank you Lindsey for the ride directions and for letting us go Star ride the shotgun as you sail to Laurelhurst – and beyond.

Last, but certainly not least, thanks to everyone who helped me build this car. Without my HAMB friends I would be truly lost, and I can proudly say this is a real HAMB powered machine. Anyway, that’s all for now. Get ready for more hot rod events in the coming year. 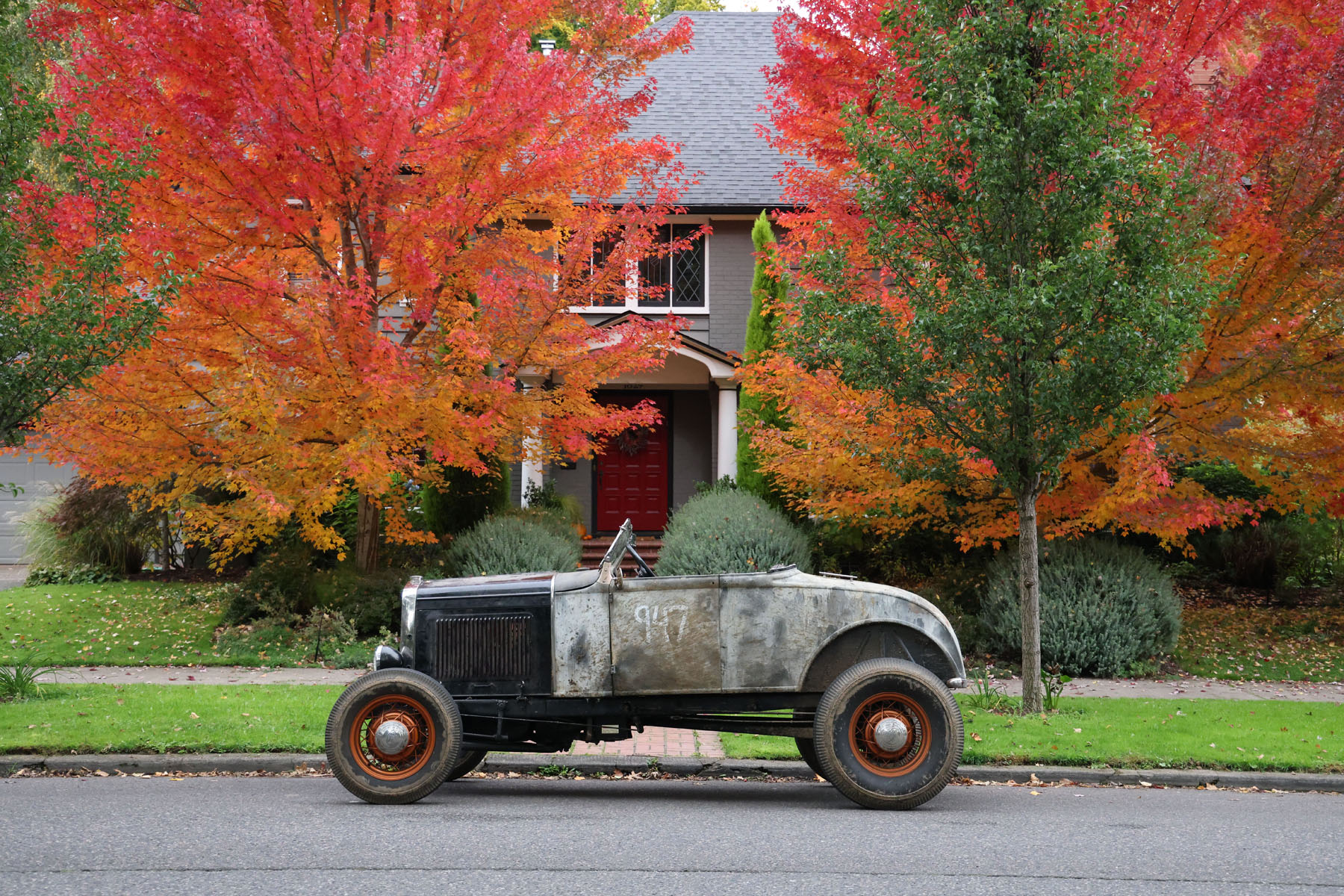 A postcard from Portland!