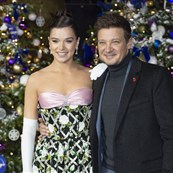 One of the more fluid aspects of Disney + Day was the new Hawk eye clip, probably because it came off Good morning America and live television requires a certain amount of preparation, perhaps not “lucid”, because everything can and will go wrong at any moment, but certainly. So Jeremy Renner appeared to release a new one Hawk eye clip, which shows Clint Barton and Kate Bishop in Times Square, where, as in real life, people dressed as superheroes pose for photos with tourists. In the MCU world, there is a dude from Ant-Man, but no Hawkeye, which seems fair. Scott Lang invented the time robbery, it’s probably a big deal now within that reality (it’ll be interesting to see if Ant-Man and the Vespa: Quantumania confirms it). Hawkeye, meanwhile, remains nobody’s favorite.

Which is the truth Kate Bishop is offering, that Hawkeye has a branding problem, which is why nobody likes it. Honestly, given the secret family AND the second secret career as a mass murderer, I’m not sure Clint is looking for that kind of attention, but I LIVE because Kate gives the gears to Clint. As I said from the start, Kate Bishop is the reason to worry Hawk eye. Everything we’ve seen from Hailee Steinfeld so far is incredibly promising, and since they’ve already destroyed a Hawkeye MCU, I get a feeling they’re being careful with Kate. A lot of things are riding on her, and Steinfeld, in particular, is hoping for a Young Avengers thing somewhere along the line. This is probably why Clint never got a good jolt in the MCU. It was never a focal point for any story. But if Marvel wants the Young Avengers to come to the screen – film or television – they need Kate to train. Fans have to hug her, people have to invest in taking care of her. So I will continue as I did and put my hopes on the Good Hawkeye, Kate Bishop. At least she has no branding problems.

Attached – Jeremy and Hailee at the Hawkeye screening in London at the end of last week.