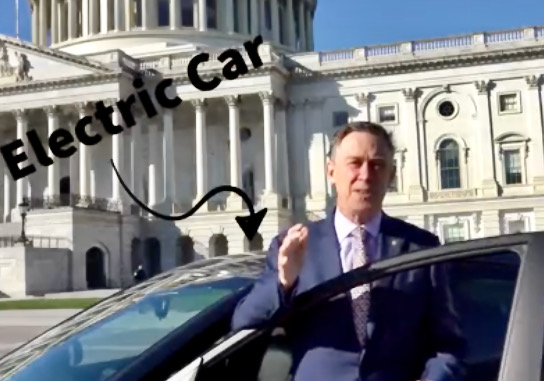 US Senator John Hickenlooper is very excited and claims his first invoice is about to be converted into law.

However, says Hick, it was his language from a bill he wrote that was included in the future law, also known as that awful God infrastructure account.

We just can’t find any of that language in the bill he boasts of, in the infrastructure law.

To top it off, his bill wasn’t a big deal anyway.

But good for him!

Our first bill, the RECHARGE Act, is becoming law! ⁰⁰ To show you what it does, I took an electric car for a ride 👀 pic.twitter.com/jypBVaVmhr

According to Hick, his bill, language, whatever, would lower costs for electric vehicle drivers.

According to the current measure he has presented that has not become law as a separate bill, it only asks states to consider ways that can promote greater electrification of the transport sector.

It looks like Hick just wanted to take a ride in that electric vehicle that sold for over $ 43,000 before inflation soared and consumer prices jumped 6.2% in September.

And seriously, who wants a vehicle that loses half its charge from Denver to the Eisenhower Tunnel?

PeakNation ™ will remember that as governor, Hickenlooper promised in May 2018 to increase the number of electric vehicles on Colorado’s roads from 12,000 to one million by 2030.

More than three years later, Hick’s policies only increased that number to around 50,000.

At this rate, Hickenlooper’s grand plans will miss out on some 900,000 vehicles.

Thanks to the Democrats, Colorado workers are struggling to afford gas to drive to work, let alone pay more than $ 40,000 for an electric car like Hick’s.

If you approve of this direction, vote Democrat in 2022.