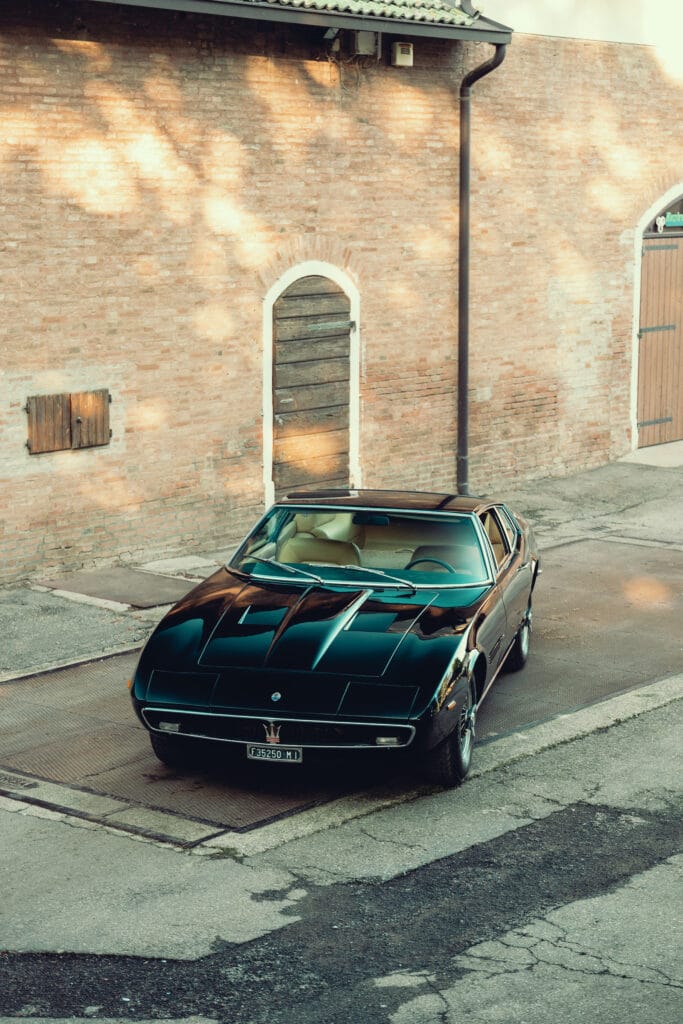 Why Ghia and not Maserati? Simple. Ghia designed the car under the watchful eye and expert hands of Giorgetto Giugiaro.

Named for a powerful, hot wind in North Africa that carries a large amount of sand with it, the Ghibli was built from 1967 to 1972 to replace the Mistral. The Ghibli’s long, sleek, fastback profile, hidden headlights and wide grille hid some of the ordinary bits of the Mexico 2 + 2 coupe and Quattroporte sedan.

This means it uses a live rear axle on leaf springs in the rear. However, it used a tubular frame, double wishbone suspension, coil springs, and an anti-roll bar at the front, similar to that of its sibling Maserati models.

Under the hood, instead of using the Mistral’s 255-horsepower 4.0-liter DOHC in-line-6, the Ghibli was powered by a 330-horsepower 4.7-liter DOHC V-8 with four double-barreled Weber carburetors attached to a 5-speed ZF. manual gearbox and four-wheel disc brakes. The following year, a BorgWarner 3-speed automatic transmission was offered.

Despite the fact that the Ghibli outperformed both the Ferrari Daytona and Lamborghini Miura at the time of its launch, further additions came in 1969.

It started with the addition of the Ghibli Spyder, which could be equipped with an optional hardtop. Though nice, the coupe still far surpassed the new droptop until 1972; with more than 1,200 Ghibli coupes sold compared to 128 Ghibli Spyder. But the biggest news for the fast-paced crowd was the arrival of the Ghibli SS, powered by a 4.9-liter V-8.

With 335 horsepower and 354 foot-pounds of torque, the American market SS produced less horsepower than its European specification companions, although top speed was increased to 175 mph, making the car the fastest production Maserati.

The Ghibli would remain in production until 1973 and retain its eternal good looks. In fact, Henry Ford II bought one and placed it in the lobby of the Ford Product Development Center in Detroit, as an example to follow and a source of inspiration.

A remarkable car written by a notable designer

The Ghibli came from the pen of one of the leading automobile designers in the industry, a member of the Automotive Hall of Fame.

Giorgetto Giugiaro began his career by joining the Fiat Department of Special Vehicle Design Studies in 1955. After four years, Nuccio Bertone attracted the young designer to work at the Bertone Group.

There, Giugiaro worked on some of the most important projects of the 1960s, including the Aston Martin DB4 GT Jet Concept, the Ferrari 250 GT Concept, the Chevrolet Corvair Testudo Concept, the Alfa Romeo Sprint and the Fiat 850 Spider.

In 1965, Giugiaro would leave Bertone to join Ghia, working on cars for DeTomaso and Maserati, most notably the Ghibli. In 1967 he left Ghia, collaborating with Aldo Mantovani to form Italdesign, then Italdesign Giugiaro, which later created more than 200 vehicles.

In 2020, the Volkswagen Groupacquired 90.1% of Italdesign Giugiaro SpA, Turin, with the remaining shares held by the Giugiaro family.

The model name survives, but is it a real Ghibli?

Maserati would have revived the model as the Ghibli II in 1992, but the car’s massive, albeit smooth, styling bore little resemblance to its sexy predecessor. Designed by Marcello Gandini, who designed the iconic Lamborghini Countach, it was powered by a 288hp 2.8-liter V-6 engine and an optional 5-speed manual or 4-speed automatic transmission. The Ghibli II was built until 1998, when it was replaced by the Maserati 3200 GT.

The Maserati Ghibli of today is a different animal, and the use of the name on a medium size four-door luxury sports sedan caused a stir among the Maserati faithful. Debuting for 2013, the model remains in production today, proposed in GT, Modena, Modena Q4 and Trofeo versions.

It features a 3.0-liter 345hp twin-turbo V-6 that transmits its power to the rear wheels. Opting for the Modena raises the stakes to 424 hp with rear or all-wheel drive “Q4”. Topping the range is the Trofeo, equipped with a Ferrari-derived 3.8-liter twin-turbo V-8 that sends 572PS and 538Nm of torque to the rear wheels. All Ghibli cars are equipped with an 8-speed ZF automatic transmission.