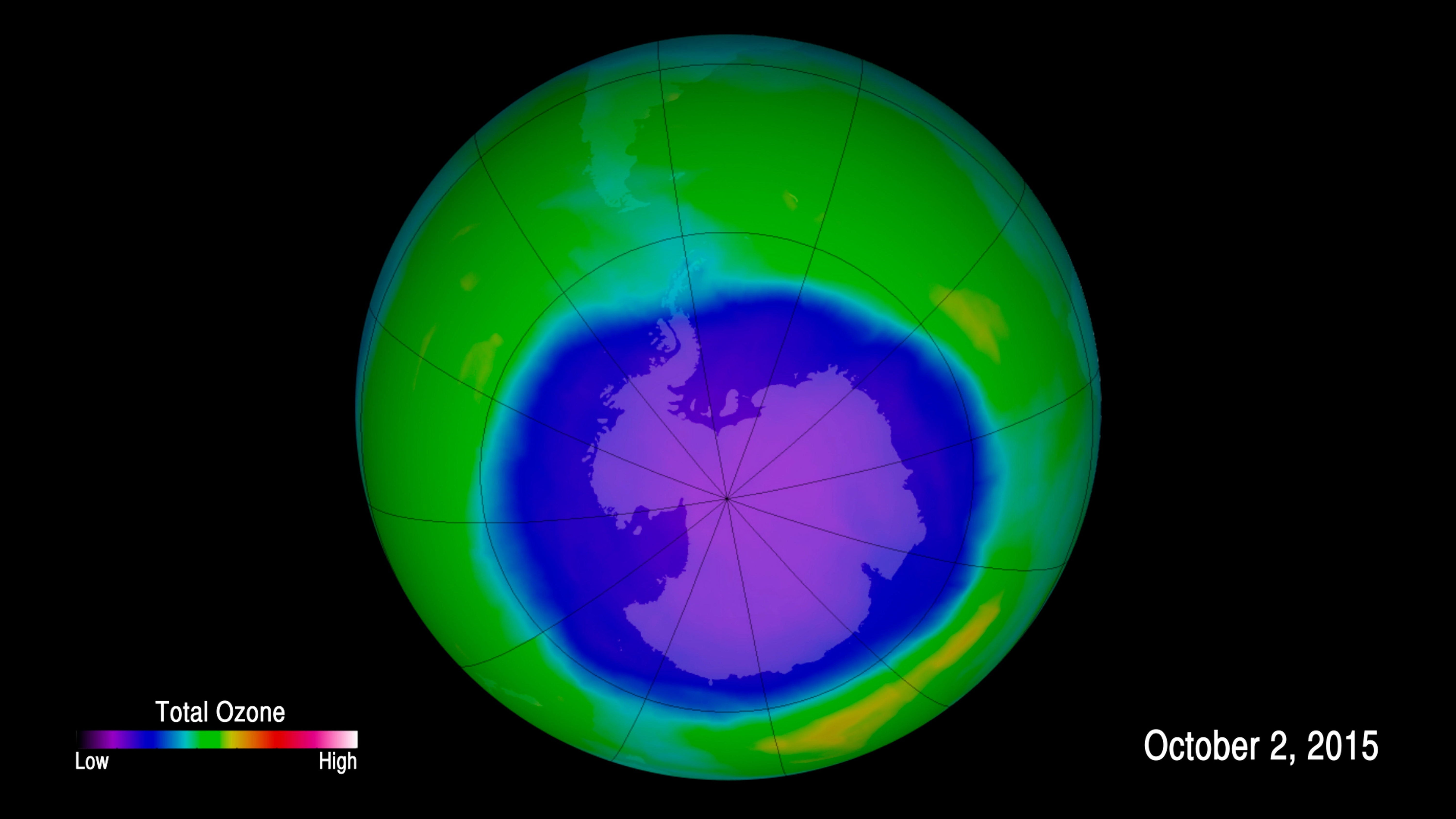 The Montreal Protocol not only preserved the ozone layer, it helped save the Earth from a time bomb of climate change.

The historic ozone treaty was agreed 35 years ago this month, at a time when both climate and ozone science were far less developed than they are today. However, all nations have signed and accepted binding commitments to reduce the production, consumption and emissions of chemicals responsible for thinning the ozone layer that protects the planet from the most harmful solar radiation. The same set of chemicals also turned out to be immensely powerful greenhouse gases, and cutting them off bought the world valuable time to deal with the climate crisis.

“If we let the [chlorofluorocarbons (CFCs)] if it had continued to grow, we would have had the impacts of climate change that we’re feeling now … a decade ago,” said David Doniger, a lawyer with the Natural Resources Defense Council who has worked on the issue since the 1980s. “And things would be much worse now.”

The protocol’s status as a climate treaty was enhanced by the 2016 Kigali Amendment, named for the Rwandan capital where the agreement was drafted, which focused on a class of refrigerants that did not deplete the ozone layer but forced the climate. . Scientists say the global phase-down of hydrofluorocarbons (HFCs), which the United States is now ready to join after a key Senate vote on Wednesday, has the potential to stave off half a degree Celsius of warming by 2100.

Scientists, lawyers and others who have worked on the issue for decades say that long before international negotiators agreed on HFCs, the ozone treaty had prevented a particularly damaging set of climate superpollutants from entering the world. air conditioning and refrigerators that developing countries were using. finally acquiring.

David Fahey, director of NOAA’s Chemical Sciences Laboratory and co-chair of the Montreal Protocol’s scientific review panel, was among the scientists who in 1987 flew a NASA research plane into the ozone hole that had appeared over Antarctica. . At the time there were several competing theories as to why the hole was appearing, he said.

But NASA’s trip, he said, “created a smoking gun plot, as we call it, that was really the foundational evidence that chlorine was destroying ozone on the scale of what would cause the ozone hole in Antarctica.” .

“The same month that we were in southern Chile flying to Antarctica, the Montreal Protocol was being signed in Montreal,” he said. “And basically it was signed without knowing for sure what was causing the ozone hole in Antarctica.”

The new agreement was not only a leap of faith when it came to science, it had attributes that have never been replicated in any subsequent climate treaty, despite much higher levels of scientific certainty.

The treaty is universal with 197 member countries. It is legally binding with sanctions for countries that do not comply with its provisions. And it is fully funded, meaning that poorer countries that might not have been able to meet their targets to phase out chemicals received assistance from richer ones.

“There is no other forum that has those three dimensions,” Fahey said, noting that the 2015 Paris Agreement on climate change is based on voluntary commitments with no penalties for breaching them.

“Probably the underlying problem with the climate change situation is that we don’t have that forum,” he said.

The Key Role of the DuPont Scientist

Fahey said there was some understanding among scientists early on that CFCs played a role in climate change and ozone depletion. But that role was clarified by a scientific study he and four other scientists published in 2007, which looked at “worlds averted” by stopping the growth of chemicals.

The report showed that without the Montreal Protocol, the use of CFCs would have skyrocketed. In a conservative scenario for 2010, the chemicals would have had a greenhouse gas content almost equal to half of carbon dioxide emissions from all other sources. The effect on the climate would have been catastrophic.

“I think the estimates are on the order of an additional 2 degrees by mid-century,” said Susan Solomon, a professor of environmental studies at the Massachusetts Institute of Technology.

He pointed out that the world continued its trajectory of increasing use of CFCs until 2050, the consequences for the ozone layer would have threatened the health and survival of all living beings on the planet, including humans. That might have forced the action, he said.

“The good news is that we avoided all of that, and not only did we save the ozone layer, but we also won a tremendous victory for the climate,” he said.

While CFCs had the biggest impact on climate change, the hydrochlorofluorocarbons (HCFCs) that temporarily replaced them still had significant climate consequences. After the 2007 document was published, parties to the Montreal Protocol moved quickly to shorten the treaty’s time frame for HCFC phase-out, an adjustment that Fahey said was the first decision made under the Montreal Protocol to reduce the global warming.

HCFCs have been replaced by HFCs. And HFCs, which have no effect on the ozone, were intended to be the final destination of the Montreal Protocol. But they are climate superpollutants that can be thousands of times more powerful than carbon dioxide.

The industry initially resisted the idea that the use of HFCs would have a significant impact on climate change. But Fahey credits an industry scientist, DuPont’s Mack McFarland, with turning the tables.

“This became one of his main messages not only for delegates, but also for scientists and technologists,” he said. “And it wasn’t extremely well received or received right away. And even the scientists, myself being one of them, didn’t really get it, so to speak.”

But in 2009, McFarland, Fahey and the other scientists who had collaborated on the 2007 paper on the climate implications of the protocol published a paper on the effects of running the world’s air conditioning and refrigeration units on HFCs. And its conclusions triggered the negotiations that ultimately led to the creation of the Kigali Amendment eight years later.

Solomon said he was surprised when the Senate voted this week by a 69-27 margin to join the Kigali treaty. The agreement entered into force on January 1, 2019, after reaching a ratification threshold. The United States is the 138th country to sign.

But Solomon said that in the 1970s and 1980s, the US led the charge in global ozone protection.

“I think the main credit should go to the American people,” he said.

When ozone science was in its infancy, not long after scientists Sherwood Rowland and Mario Molina demonstrated in 1974 that CFCs damaged ozone, but before the extent of the damage was known, American consumers stopped buying deodorants spray and hairspray.

The consequences were transformative. US personal care products accounted for 75 percent of the world’s use of CFCs in 1974. Falling demand forced the industry to look for alternatives and made the Montreal Protocol possible.

And the countries that now project leadership on climate change and other issues have clung to their aerosol products.

“The Europeans were actually on the other side of the negotiating table,” Solomon said. “It was us saying, ‘We should get rid of these compounds, we have substitutes, let’s move on. Save the planet. And it was Europe that said, ‘Well, you know, we don’t really see that need the way you see it.’”

The direct climate benefits of the protocol’s cuts in CFCs, HCFCs and now HFCs are also not the whole story.

NRDC’s Doniger referenced a study published in Nature last year that found that without the ozone preservation benefits of the Montreal Protocol, much less COtwo it would have been absorbed over the past 35 years as the world’s biosphere disintegrated.

“The damage done to trees and other vegetation would have meant that they would have absorbed much less COtwo of the atmosphere,” he said.

the Nature study argues that the protocol helped prevent 2.5 degrees Celsius of warming. For context, scientists have warned that the world, and especially vulnerable countries, will face catastrophic damage if warming exceeds 1.5C.

Russell Westbrook is still combative and the Lakers are torn

Scheduled to be a day filled with opulent optimism, the Lakers reportedly began training camp by treating reporters to a new coach, a new...
Read more

Scientists Who Discovered Cause of Narcolepsy Win Breakthrough Prize

Fresh vs. Dry Pasta: The Differences and When to Use Which

The world of pasta is very wide. In addition to all the different shapes that are available, another quality to keep in mind...
Read more