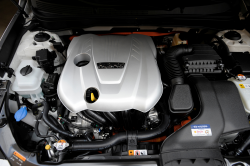 According to Hyundai Canada, dealers will update the engine control modules to presumably detect problems before the engines fail or catch fire.

The automaker investigated non-accidental fires in Sonata Hybrid and Tucson vehicles based on warranty claims and field reports.

Some vehicle fires can be difficult to diagnose due to damage from the fires, but Hyundai says engines can seize and broken connecting rods can puncture engine blocks. This can cause fires because oil can leak onto hot surfaces in the engine compartments.

Even if an engine does not turn into flames and ash, engine problems can cause the engine to fail while driving. The engine control module update will presumably be used to alert drivers of potential problems before the MPI engines shut down.

Hyundai Canada states that Sonata Hybrid and Tucson owners should always follow the correct vehicle maintenance schedule as described in the owner’s manuals.

Hyundai drivers should also contact their dealers if they notice unusual engine noise, reduced horsepower, or if they see engine / oil warning lights.