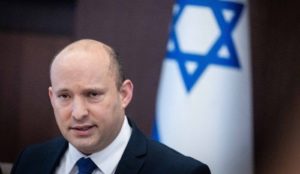 The jihad’s imperative to “drive them out of where they kicked you” (Quran 2: 190), while not true of Israel, is not “radical” or “militant”, but mainstream. However, Bennett is to be applauded for saying what most non-Muslim leaders dare not say.

On Thursday evening, at the fifth annual Christian Media Summit, Prime Minister Naftali Bennett stressed that the Jewish state protects the rights of all faiths.

Israel is the only country in the Middle East that fully protects Christians, he said.

The Christian population [sic] in Israel it is “growing, thriving and prospering,” he said. “More than ever, Israel is united with Christians. We are brothers and sisters. We are united. We will not allow anyone to turn off our light. “…

“Here in Israel they were [sic] they are also fighting a very visible enemy, radical militant Islam, “Bennett said, adding that the danger extends across the Middle East.

“The terror that begins in Tehran seeks to destroy Israel, dominate the world and push it into a dark abyss,” he said …