For this report, 70 global C-level operational technology (OT) executives from various manufacturing companies were interviewed to understand their views on virtualization in the broader context of industrial automation, and especially soft PLCs. 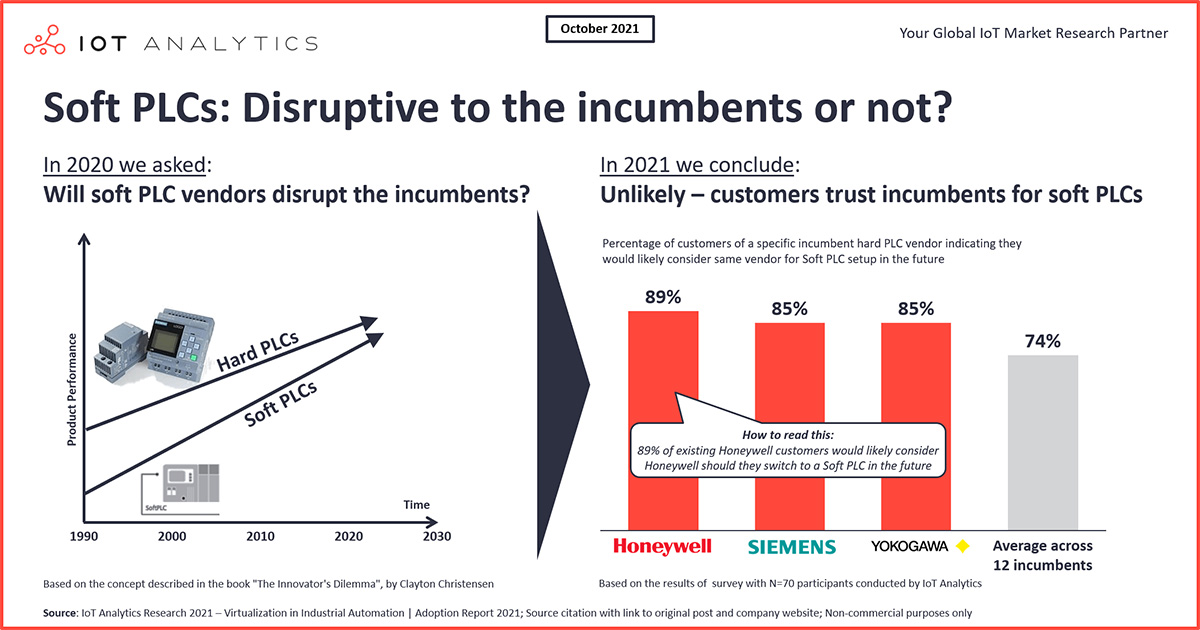 Revisit our 2020 research on software-based PLCs

In December 2020, we published a widely read article titled “Soft PLC: The Industrial Innovator’s Dilemma”. In it, we argued that the rise of software-based PLCs in the industrial world can be compared to the rise of digital cameras in photography and represents a potential innovator’s dilemma for incumbents similar to the infamous Kodak example.

Our new research suggests that the promise of virtual PLCs and software clearly resonates with potential end users. Interestingly, however, the research also shows that industrial end users prefer to purchase soft PLCs from existing hard PLC suppliers, thus altering our view of an industry potentially open to disruption by new entrants. Soft-PLC vendors would remain the innovators, but their chances of disrupting most of the market now seem less.

“The promise of virtual and software-based PLCs clearly resonates with potential end users.”

THE BIG PICTURE: COMPANIES ARE DIGITIZING THEIR INDUSTRIAL AUTOMATION SETTINGS

With 75% of companies surveyed having a dedicated digitization strategy, modernizing existing industrial automation setups is clearly at the heart of most manufacturers. In fact, according to our survey, one third of the automation budget is now dedicated to digitization activities. This includes topics such as connecting disparate resources, performing data visualization and analysis, updating control systems to meet advanced data needs, and modernizing equipment and software, among others.

Quotes selected by OT decision makers about their digitization strategy

“We are bridging the gap between the operations of the various departments. For example, we work in terms of fully digitized design and operations to include project management, material handling, compliance and certification, operations, maintenance and procurement systems, cost control, planning and reporting. “ – Director of operations at an Oil & Gas company in the United States

“We have a roadmap for Industry 4.0, which is only 30% completed. Our strategy is to integrate all of our manufacturing tools to increase tool utilization levels (real-time event detection), increase productivity (linked to our MES and ERP systems) and AI (build a large database of product data). “ – VP Operations at an electronics manufacturing company in the United States

Virtualization of automation workloads is another key theme for today’s industrial enterprises. Virtualization decouples hardware from software and allows workloads to run in a distributed fashion from the cloud to the far end. According to our research, 60% of organizations have already virtualized some of their storage, visualization, supervisory control and data acquisition (SCADA) or workload control. While PLC virtualization (i.e. the introduction of software-based PLCs) is not yet the top priority for most manufacturers, they understand that this is an option and are considering virtualization of the control workload via Software-based PLCs. The transition to virtualized control workloads has certainly begun.

Soft PLC (or software-based PLC) = A control system configuration in which the control logic software is partially or completely decoupled from the PLC hardware, thus allowing the software to execute control logic workloads (for example, the command to close or open a valve) on different pieces of hardware.

Virtualized PLC = A soft PLC deployed in a virtualized computing environment (that is, on top of a hypervisor).

In our interviews, 74% of respondents say they probably or most likely would consider their existing PLC hardware vendor for a future virtualized soft-PLC / control configuration. Therefore, it is not surprising that the most mentioned suppliers include the current market leaders for rigid PLCs, such as Siemens, Rockwell Automation and ABB.

The top three companies in our interview set are Honeywell, with 89% of their customers likely to consider their soft PLCs in the future, and Yokogawa and Siemens (both 85%).

WHY THE PREFERENCE FOR EXISTING SUPPLIERS?

The clear number one decision criterion when purchasing virtualized or software-based controllers is that they must ensure high availability, with extremely high uptime and low average times between failures. This is so important because the downtime of one controller can lead to the production shutdown of an entire factory which can cost millions of dollars in minutes.

Cyber ​​security practices and the ability of an internal team to maintain the system are also important decision criteria.

Historic vendors have mostly already demonstrated that they meet these criteria with their existing automation systems, and therefore it is perceived that their solutions have a higher level of reliability than new players on the market (or a combination of standardized hardware and PLC software).

SUPPLIERS PREPARE FOR THE FUTURE

While a truly hardware-independent software-based PLC offering has yet to be submitted by one of the large incumbents, incremental steps are being taken in this direction to “test the water”.

Schneider Electric also appears to have taken clues from the market with the latest launch of its software-centric industrial automation system, the EcoStruxure Automation Expert platform, in its Universal Automation portfolio. Based on the IEC 61499 standard, Automation Expert lays the foundation for open, portable and reliable automation. Automation Expert allows its users to completely decouple control hardware and software, allowing control logic to run at the edge and in the cloud.

These examples show that historical gamers are active and are evolving their systems towards more modular and virtualized configurations of the future.

CONCLUSION AND OUTLOOK – THE CUSTOMER CALLS

By revisiting what we have called the industrial innovator’s dilemma, we no longer think it represents a true innovator’s dilemma. Historical suppliers are ready and customers are willing to work with them. At the same time, there are also market innovators (we highlighted Beckhoff and Codesys as two interesting examples in our final analysis; another is Austria-based Logi.cals) who are likely to gain more traction in the near future.

Our latest research shows that manufacturers are actively digitizing and virtualizing their industrial automation systems. In addition to the control logic, other workloads such as storage, visualization and SCADA are also rapidly virtualized.

Our research also suggests that industrial automation vendors need not fear dilution of margins when introducing soft or virtualized PLCs. In fact, some manufacturers have indicated that they would be willing to pay more for their soft PLCs than their hard PLC configuration due to the promise of further cost savings in system maintenance and potentially greater reliability.