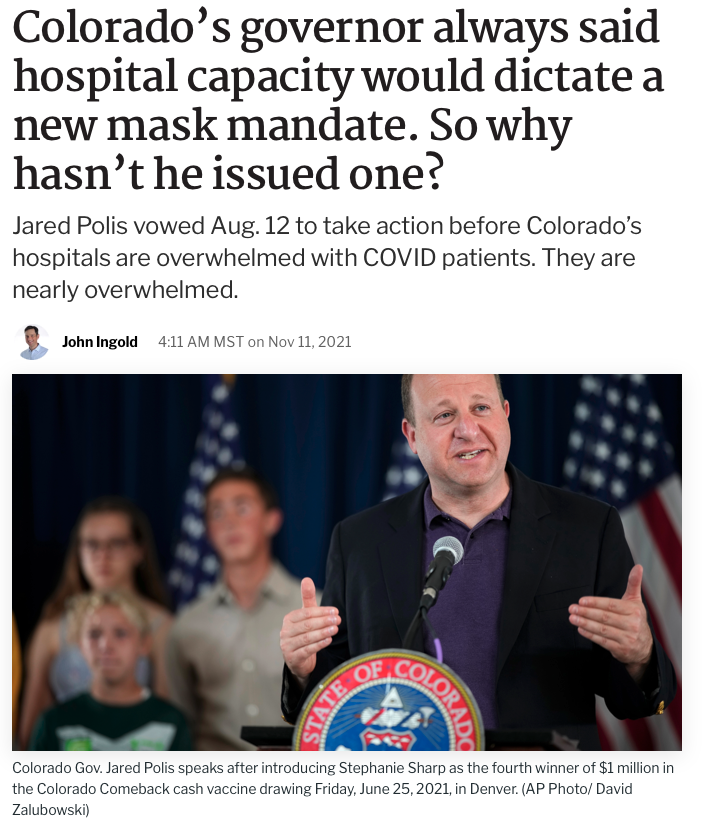 The media are trying to goad Gov. Polis goes back to a statewide masquerade mandate, because they insist he promised he would punish us with such if COVID cases overwhelmed hospitals.

Leading the pack is the Colorado sun, who insists Polis was clear on August 12 when asked if he could consider restoring order.

“We will not overwhelm our hospitals,” he said then. “We will take the necessary steps to avoid doing so.”

Our hospitals are not overwhelmed, we have a shortage of ICU beds available.

About 1,400 people in Colorado were hospitalized last week with the virus. Colorado can accommodate approximately 2,000 COVID patients among 8,800 beds statewide.

This is the cause of the media alarm hiding behind the masks again, as Polis calls for an increase in hospital beds, vaccine passports to attend events and the expansion of vaccine booster shots beyond the lines. CDC guide to anyone who wants one.

Colorado Public Radio he is also clamoring for the mandate of the mask and has gone so far as to suggest that the spike in cases is caused by Trump’s voters not getting vaccinated.

For months, health research groups like KKF have noticed a sharp and growing red-blue divide in vaccination rates. The counties that voted for Trump in the 2020 presidential election are less vaccinated than those that voted for Biden.

The article points out that Mesa, Weld, El Paso and Pueblo have high hospitalization numbers, while Eagle, Boulder and Broomfield are at the lower end of the scale.

They are speculating that only those who received the vaccine voted for Biden, while the resisters voted for Trump.

Yet, according to that same source cited by CPR, we see that the vaccine numbers in Colorado are actually broken down by race / ethnicity.

No one we know has been asked who they voted for before getting a vaccine. Yet everyone is being asked to disclose their race, and states are reporting that information to the CDC.

The race breakdown of those who received at least one vaccine by November 1 in Colorado is: 69% of the white population, 63% of the Asian population, 61% of the black population, and 37% of the Hispanic population.

Democrats continue to blow up the myth that only Republicans are turning down vaccinations to play at their base and divide voters.

Polis has again relied on that stereotype recently to explain why he won’t restore the mask’s tenure, other than the fact that he will be re-elected next year.

“I think most Coloradians are tired of wearing masks to protect people who don’t seem to want to protect themselves,” she said earlier this month.

Do you know who is really sick of wearing masks all day? Our children. But that’s another story.

Put aside the assumption that Polis is only despising Trump voters, who liberals believe deserve to die anyway.

What Polis is saying is that these people don’t want to save themselves and it’s not worth trying to protect them:

63% of Colorado Hispanics who have not been vaccinated.

39% of Colorado blacks who have not been vaccinated.

37% of Asians in Colorado who have not been vaccinated.

31% of Colorado whites who have not been vaccinated.

Somehow, we doubt that they are all Trump voters.