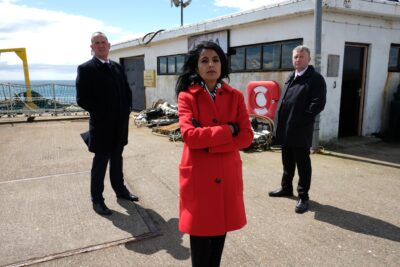 Murder Island on Channel 4 was a surprise hit and fans desperately want a Series 2.

We all agree because we love detective dramas and we love trying to solve mysteries, and that kept us guessing and kept us involved.

But here’s what we would like to see in a second series.

Murder Island Series 2: Why Is It Winning?

One of Channel 4’s brilliant moves was to hire award-winning mystery writer Ian Rankin to come up with the storyline.

And the creator of the Rebus series came up with a doozy.

To know more: Murder Island: What books has Ian Rankin written and who are the show’s experts?

In The island of the crime Charly Hendricks’ body was discovered at ‘the Manse’.

Now it’s up to four teams of amateur detectives to work with actors playing police officers and other characters to find the killer.

Like any good mystery writer, Ian has a multi-layered story, which is easily adaptable for TV.

We are given details about the character and asked to examine the victim’s family, connections and lifestyle.

It was partly a party game, partly those books you had as a child where you could choose an alternate ending.

Basically, it allows the viewer to play at home – moving on to Vera Stanhope, Jimmy Perez, Ted Hastings, and every other TV detective you can think of.

Why Channel 4 Should Hire Mystery Writers For Series 2

But with the end of the first series now perfectly in focus, I really hope Channel 4 continues not only with the show but with the format as well.

What I’d like to see is another major mystery writer hired to come up with the story for the second series.

Ian Rankin is a great writer and has done a great job here, but there are so many great mystery novelists in the UK that I would love to see more involved in the ongoing series.

Yes, I said going on.

Why did the channel fail to convince, for example, Mark Billingham – another bestseller and someone brilliant in his craft – to come up with the story for the second series?

And then how about Val McDiarmid for series three, Lee Child for series four, Peter Robinson for series five … the list goes on and the series goes on.

How about Ann Cleeves?

And, let’s face it, Ann Cleeves really should get involved at some point.

The creator of Vera, Shetland and now The long call, is no stranger to the island and would be brilliant to find something devilish for future series.

And, if you want to get away with things, why not set it in other parts of the world as well?

You could get Michael Connelly to create a story set in the United States, Yrsa Sigurðardóttir for Iceland … the list goes on.

What I’m basically trying to say is that I want more of this.

Why? It’s such a simple idea and so well done.

And I really hope Channel 4 hires another major mystery writer to join.

And even if he kept the talk about a second series, we are hoping for something more.

After all, if the story’s junk viewers shut down.

I would much rather have someone experienced in writing crime stories than not get involved.