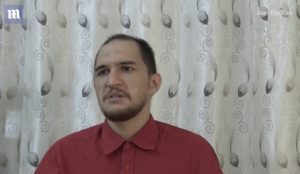 The Daily Mail, silly and deliberately ignorant as ever, shows no curiosity as to why Yago Riedijk doesn’t condemn beheading or sexual slavery. He presents his refusal simply as proof of how much a scoundrel he is. The Mail would, of course, not dare to inform its readers as to why Riedijk will not condemn these things: because of Islam.

“When you meet the unbelievers, strike the neck…” (Quran 47: 4). How can Riedijk condemn the Koran?

Shamima Begum’s jihadist husband refused to condemn ISIS beheadings or the use of sex slaves and said he still hopes to see an established caliphate.

He claimed that the attacks claimed by ISIS against the West were not “responsible Muslims” because they involved the killing of innocent people which is “prohibited in Islam”, but he refused to condemn the group’s violence against the Yazidis, who they were sold as sex slaves, and other Muslims.

Riedijk also remained silent on the beheadings of ISIS, saying only “I can’t really comment” when he was pressured to condemn the extremist group’s brutal punishments.

The Dutch extremist married Begum a few days after arriving in Syria from East London at the age of 15 in 2015 and the couple had three children together, all of whom died.

Begum is being held in the Kurdish-run al-Roj refugee camp in northern Syria amid an ongoing battle to return to the UK after she was stripped of her citizenship in February 2019.

Riedijk is being held in the al-Roj detention center. He was convicted in a Dutch court in 2018 for joining the extremist group and will face a six-year prison sentence if he ever attempts to return to Europe.

Speaking to Alan Duncan, a former Scottish soldier who is making a documentary on ISIS, Riedijk said he disagrees with the terrorist attacks claimed by ISIS against Germany, France and the UK because they involved killing “people. innocent “.

‘Personally, I disagree with these attacks for a couple of reasons. The ban on killing innocent people in Islam, women and children.

‘I see these attacks as not responsible Muslims’ [sic], ‘He said.

However, when asked about the attacks on other Muslims and Yazidis – who were sold to ISIS fighters as sex slaves – Riedijk shook his head and said ‘no comment’….

Riedijk also revealed that she discussed marriage directly with Begum when she arrived in Syria in 2015 and agreed on conditions before getting married.

He said Begum asked for an English translation of the Koran as a dowry, which he accepted …

Riedijk also refused to comment much on how Begum viewed the beheadings and punishments of ISIS. But he described seeing corpses left on the street as “an unpleasant picture” as an example, but refused to condemn the act as wrong.

He went on to describe death as part of daily life, blaming the coalition bombings for killing innocent Muslims.

Asked if ISIS was over, Riedijk said “no”, later adding when asked that he would like to see a caliphate adhering to established “Islamic traditions” …