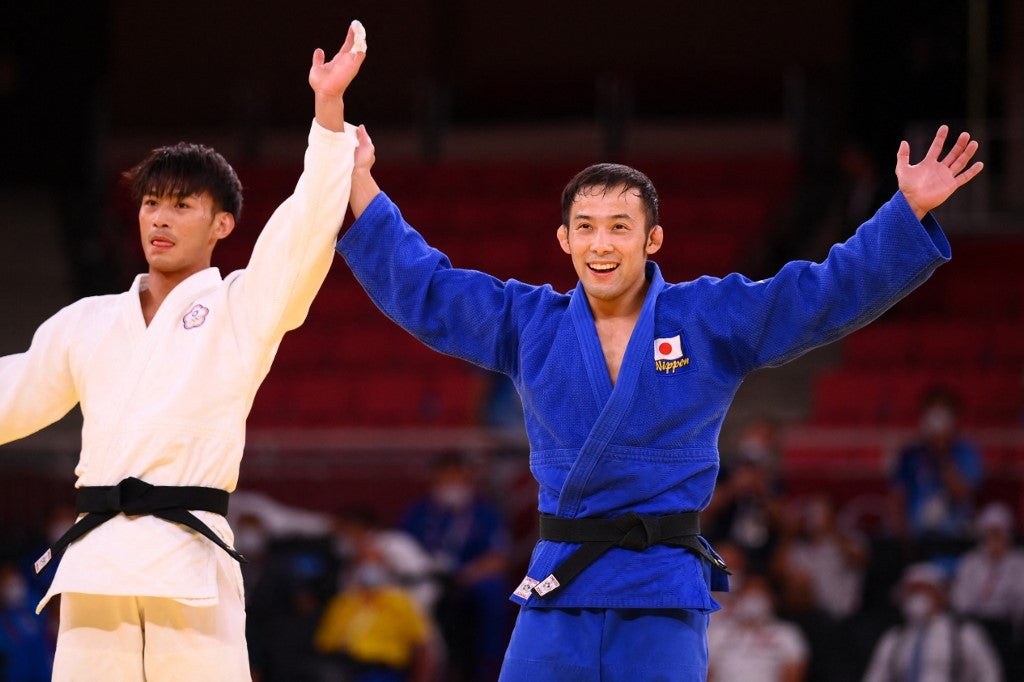 Japan’s Naohisa Takato (R) celebrates her victory in the final -60 kg judo fight against Taiwanese Yang Yung Wei during the Tokyo 2020 Olympics at the Nippon Budokan in Tokyo on July 24, 2021 (Photo by Franck FIFE / AFP).

TOKYO – Naohisa Takato won the final of the men’s 60 kg judo to give host nation Japan its first gold medal from the Tokyo Olympics on Saturday, defeating Yang Yung-wei of Taiwan in the final.

Takato’s victory underscored Japan’s strength in a sport that originated in the country. The bronze medals went to Yeldos Smetov from Kazakhstan and Luka Mkheidze from France.

The dramatic victory that left Takato in tears was in stark contrast to the lack of fans in an empty arena at Nippon Budokan, a mecca for Japanese martial arts and concert halls.

Tonaki, a once world champion who made her Olympic debut, won a scathing semi-final with an ippon, the judo equivalent of a knockout, by beating Ukraine’s Daria Bilodid in Golden Score overtime.

Japan’s triple world champion Takato, a bronze medalist at the Rio 2016 Games, had a short streak in his quarterfinals in the 60 kg category, winning during Golden Score overtime due to a foul by his Georgian opponent. Lukhumi Chkhvimiani.

In the knockout round of 16, Takato had delivered ippon against the Belgian Jorre Verstaeten.

Tonaki, 25, had previously defeated Paula Pareto of Argentina and the Hungarian Eva Csernoviczki.

Between matches at the eight-sided Nippon Budokan, which was built for the Olympic Games that Japan hosted in 1964, sanitation workers poured disinfectant spray onto yellow tatami mats to minimize the risk of coronavirus infection.

Pop, rock and dance music was used at full volume to create an atmosphere before the matches.

Dez Bryant thinks he’ll be on a list soon

Olympic swimming cap ban: What does the ‘Soul Cap’ rule mean for black swimmers at the 2021 Games?