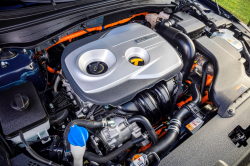 November 7, 2021 – Kia is recalling more than 10,700 Optima Hybrid and Optima Plug-In Hybrid vehicles because engines could stall or catch fire if the connecting rod bearings wear out.

The connecting rod bearings Kia Optima Optima Hybrid and Optima Plug-In Hybrid 2017-2018 can be damaged for several reasons, but the damage will result in an abnormal knocking noise. A driver can also see an illuminated oil pressure warning light.

In the worst case, the connecting rods can puncture engine blocks and allow engine oil to leak onto hot exhaust components. The chances of a fire have just increased.

The center for automotive safety filed a petition with the National Highway Traffic Safety Administration (NHTSA) to open an investigation into safety flaws in non-collision fires in 2011-2014 Kia ​​Optima and Sorento and Hyundai Sonata and Santa Fe vehicles. The Center therefore asked to add the 2010-2015 Kia Soul vehicles to the petition.

According to the petition, there are more reports of non-accident fires on Kia vehicles than similar models. And all of this was happening after NHTSA had already opened a query to determine if previous Kia engine recalls were adequate to repair Theta II engines.

Those engines were taking damage which caused stalled engines and fires.

Even after years of investigation, Kia still does not know the root cause of the problem, whether it is a design problem or a manufacturing defect.

Kia says this recall of the Optima Hybrid and Optima Plug-In Hybrid engines will help detect engine damage before a connecting rod can puncture the engine block and cause a fire.

According to Kia, in addition to the sound of the engine knocking and the oil pressure warning light, an Optima Hybrid driver should pay attention to the reduced power, burning smells and smoke.

Kia Optima Hybrid and Optima Plug-In Hybrid owners who have paid for repairs related to the 2017-2018 model year engines should ask Kia for their refund program.

Kia Optima Hybrid owners who have questions about the recall should call 800-333-4542. Kia’s engine recall number is SC218.