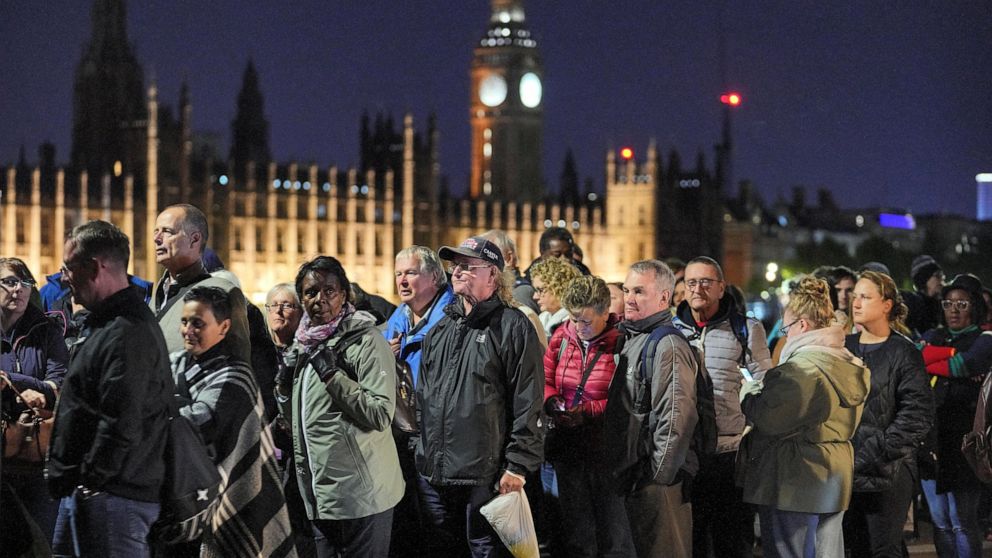 WINDSOR, England — Hundreds of soldiers from the British Army, Air Force and Navy have taken part in the first full rehearsal for the procession that will carry the coffin of Queen Elizabeth II to her final resting place.

With troops lining The Long Walk, a picturesque path that leads to Windsor Castle, the pounding of drums echoed as bands marched past a hearse early Saturday.

On Monday, they will do the same, only surrounded by thousands of people who are expected to travel to Windsor to say goodbye to the queen, who died last week aged 96.

His funeral will be held at Westminster Abbey on Monday before some 2,000 guests, including visiting heads of state. After the church service, the late queen’s coffin will be transported through the historic heart of London in a horse-drawn carriage.

It will then be taken by hearse to Windsor, where the queen will be buried next to her late husband, Prince Philip, who died last year.

Some people who won’t be in Windsor on Monday decided to get up early to watch Saturday’s rehearsal.

Local resident Katharine Horsfall said she set her alarm at 3:15 a.m. She said: “I think it will be an incredible tribute to the queen, a great send-off, with all the splendor she deserves.”

— What you need to know about the queen lying in state

— Reflections from the queue to mourn the queen

A group of British lawmakers sanctioned by China have raised concerns that the Chinese government has been invited to the funeral. One told the BBC that the invitation should be rescinded due to human rights abuses in the treatment of the Uyghur ethnic group in China’s far western region of Xinjiang.

Wang, who is close to Xi, was a member of the all-powerful seven-member Politburo Standing Committee of the ruling Communist Party from 2012 to 2017. During those years, he led an anti-corruption campaign that has been one of Xi’s signature initiatives as leader. from China.

Wang was made a largely ceremonial vice president in 2018 and frequently attends events on Xi’s behalf.

TOKYO (AP) — Japanese Emperor Naruhito and Empress Masako left for Britain on Saturday to attend Queen Elizabeth II’s funeral and pay their respects to her and the British royal family, considered a model for Japan’s monarchy in the modern history

The decision to have the emperor and empress attend the queen’s funeral underscores the importance and deep bond between the royal families. Traditionally, a Japanese emperor steers clear of funerals except those of his own parents due to a cultural belief based on the Shinto religion that considers death impure.

Former Emperor Akihito, as Crown Prince, attended the Queen’s coronation in 1953 and her Diamond Jubilee in 2012. Queen Elizabeth visited Japan in 1975.

Naruhito and Masako’s trip to Britain is their first as Emperor and Empress. The Queen’s invitation for them to visit after Naruhito’s ascension to the Chrysanthemum Throne in 2019 had to be postponed due to the pandemic.

LONDON (AP) — King Charles III and his three brothers held vigil around their mother’s coffin as it lies in London’s Westminster Hall.

Members of the public who had lined up for hours to pay their last respects continued to file out as the royals stood vigil at the historic event.

On Saturday, the queen’s eight grandchildren will hold a similar vigil.

Share
Facebook
Twitter
Pinterest
WhatsApp
Previous articleAmazon Sale: Up To 50% Off Rebecca Minkoff Bags In The Great Summer Sale
Next article“Phantom of the Opera” will close on Broadway in early 2023, ending 35 years
RELATED ARTICLES
ENTERTAINMENT

Non-Fungible Tokens (NFTs) are the most popular digital assets today, capturing the attention of cryptocurrency investors, whales, and people around the world. ...
Read more

Miami Dolphins quarterback Tua Tagovailoa was carried off the field on a stretcher during a game Thursday night after he appeared to experience his...
Read more

The detail, founded in 2019, is a review and advice platform where users discuss the side effects and benefits of...
Read more