Looking at Kiraitu beyond his politics
Advertisement 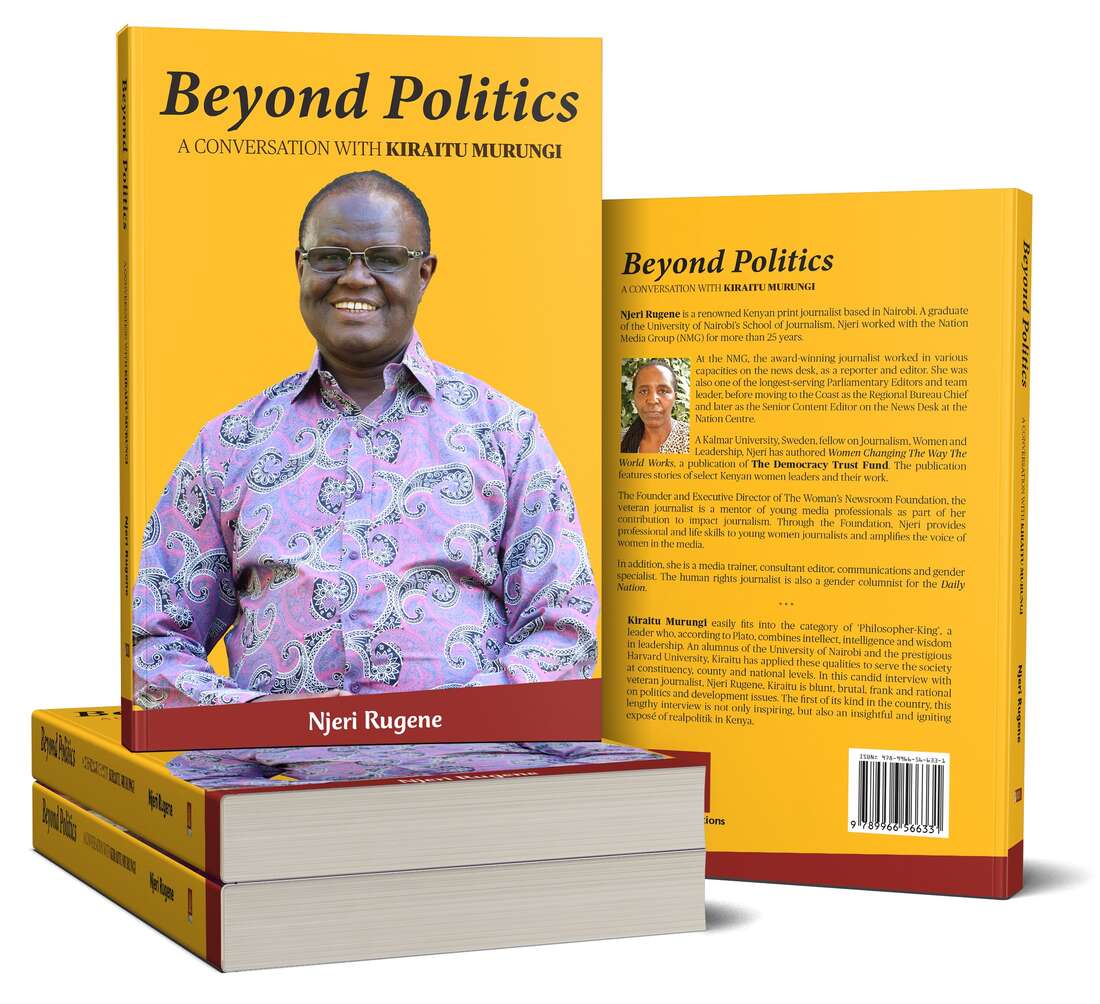 Njeri Rugeni might consider coming out with a series of ‘tell-it-all’ conversations with high-ranking Kenyan politicians like Kiraitu Murungi, whose book was released last Monday at the Serena Hotel, ironically titled Beyond Politics.

This award-winning veteran political journalist knows most local politicians by first name after 25 years of covering them, whether as a reporter and parliamentary editor, Head of the Coastal Regional Office, or Senior Content Editor at the News Desk head office of the Daily Nation.

And with his knowledge, experience, and incisive interviewing style, Njeri now has an excellent illustration of why politicians need a book that includes “a conversation” with Njeri.

Setting your sights on the current Meru County Governor might seem like a surprising place to start. But the Covid-19 lockdown had already begun when Kiraitu finally agreed to a series of interviews (leading up to the book) that Njeri had initially proposed at some point.

Beyond her decades in journalism, she had already published her first book on professional women entitled Women Changing the Way the World Works.

So why not continue with ‘a conversation’ with a male politician whose career he had followed since the 1990s when Kiraitu was among the ‘Young Turks’ who spearheaded the Second Liberation that led to the dismantling of Daniel’s one-party status. arap Moi?

The book itself reflects not only Njeri’s encyclopedic knowledge of the man, but also Kiraitu as not simply a Harvard-trained human rights lawyer turned politician who went from parliamentarian to cabinet minister (twice ), Senator and finally the current Meru County Governor. .

Their conversation goes far beyond politics to include Kiraitu’s views on everything from Stoic philosophers like Lucius Seneca and Ngugi wa Thiong’o on the decolonization of people’s minds to the politics of BBI and Kenya in general.

But perhaps the most compelling feature of their conversation is that Kiraitu tells his version of the stories, such as the scandals that momentarily scared his name, including his alleged role in Anglo-Leasing and his inept paraphrasing of Okot p’Bitek’s sexist line. from Song of Ocol that he was nearly scalped by women who had once considered him their ally, but nothing more.

Beyond Politics reveals as much about Njeri’s direct and well-researched interview style, which is poignant, forceful, and brazen, as it does about Kiraitu, who is equally open to answering all the issues he raises.

One of the central questions that Njeri emphasizes is why he, as a former Minister of Justice and Constitutional Affairs, failed to fulfill his promise to end corruption with his so-called ‘radical surgery’. There was the issue of having to retire from office for nine months while the accusations against him, made by anti-corruption ‘czar’ John Githongo (whom Kiraitu himself had appointed) could be investigated.

Kiraitu was eventually acquitted of all charges and returned to Kibaki’s cabinet, now as Minister of Energy. But the smell of smoke never quite dissipated.

However, Kiraitu is philosophical about what people falsely say or believe. He could still cite all the genuine successes he achieved during his seven years as Energy CS, such as bringing electricity to a million rural Kenyans and expanding indigenous energy sources such as geothermal, coal and even oil that was discovered in Turkana during his time as a minister. .

The book is not an apologist’s tale, explaining all the ways that Kiraitu was the victim of political enemies. But he admits that he has not had it easy, especially during his working days for President Kibaki and all the occasions when ethnic politics interfered with the democratic process.

But even as justice minister, he had several successes before Anglo-Leasing and other scandals broke out and tarnished his name.

Having promised such ‘radical surgery’ to remove corruption from the courts, he says he was able to eliminate at least “76 magistrates, 12 Superior Court judges and four Appeal Court judges.”

The other advantage of this book is that it offers us a panoramic view of Kiraitu’s personal and family life. How he came from a peasant background (with a Mau Mau freedom fighter for a father) to become the first in his classes at Alliance and the University of Nairobi School of Law.

We learn how his “lisp” of Meru led him to become a bookworm and one of the most eloquent speakers in Parliament. We even found out about his family and wife Priscilla, who almost left him after he decided to join politics and ‘change the system’ from within. But once she understood his intentions, she became his staunchest supporter and ally.