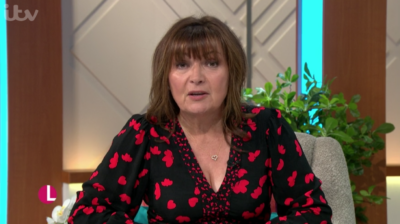 Lorraine Kelly said she was “worried” about the Queen’s health today after Her Majesty withdrew yesterday from the commemorations of the Sunday of Remembrance (Sunday November 14).

The 95-year-old had sprained his back.

What did Lorraine say about the Queen today?

“I was a little worried because for her she didn’t show up at this event of all things … so how are you?” Lorraine asked.

“I think we shouldn’t be too worried, although there is always a collective vacillation when we don’t see the Queen and think we will.

To know more: The queen “gradually transfers responsibility to Charles and William” amid health concerns, the expert says

“But this last minute cancellation yesterday… and it literally came so soon before the ceremony started.

“The palace told us she had sprained her back, but no one was more upset that she wouldn’t be there than herself.”

Roya went on to explain that the queen had been resting her back for three weeks and had hoped she could do it yesterday.

The focus then shifted to his son, Prince Charles, which, Roya said, seemed “emotional” during the ceremony.

Roya speculated that perhaps the “weight of responsibility” made him seem so “emotional”.

However, the reporter said she expects the queen to resume light duties within the week.

Roya also said she expects Her Majesty to record her traditional Christmas message over the holidays.

What did Boris Johnson say about the Queen?

After His Majesty lost his traditional appearance at the annual ceremony honoring the victims of the world wars, the Prime Minister Boris Johnson released a press release.

“I just want to reassure everyone that I saw the Queen for a hearing in Windsor on Wednesday and that she is very well,” the Prime Minister said.

“It shouldn’t have to be said, but I wanted to say it anyway.”